Gore’s financial backing came from wine, real estate, and the other usual suspects

James Gore is said to be a nice guy, and he and the rest of his family may well be. His brother Tom is an active supporter of Future Farmers of America, and both he and James have hands-on experience in eco-friendly agriculture — white-hat stuff to be sure.

Nor is it a sin to make a living working for Constellation Brands (Tom), Altria Group’s Chateau Ste Michelle (Uncle Doug), or for that matter the Wine Institute (James in the past).

But We, the People, are not asking Tom or Doug Gore to step outside the bounds set by their employers and take positions that may not be in Big Wine’s best interests. Yet we are asking the members of the Sonoma Board of Supervisors to do so, James included.

A man of the people? Upcoming votes in the Board of Supervisors will be the test.

If what’s good for Constellation Brands and the Altria Group is good for the county, there’s no problem. If that’s not the case, perhaps there is a problem — and a serious one.

Then, there is the source of Gore’s campaign money. It didn’t come in small bills from the county’s 99 percent. Gore’s cash came from all the usual suspects among Sonoma County’s 1 percent, plus an interesting new source from outside the area.

In the county’s most costly race for supervisor ever, Gore’s supporters raised 50 percent more than his opponent, Windsor council member Deb Fudge. As the Press Democrat commented, “the swing vote on key issues such as land use and environmental regulation was seen to be in play.”

As well, Gore got significant financial support from real-estate and construction, notably the Associated Builders and Contractors (ABC), the California Real Estate PAC, and North Coast Citizens for a Better Economy (aka the North Coast Builders Exchange). There were also contributions from gravel mining.

Big contributions came in from the Santa Rosa Chamber of Commerce, the North Bay (Business) Leadership Council, and the Sonoma County Alliance (SCA), which despite its progressive-sounding name is more or less the county chamber of commerce.

Gore backers tried to tar his opponent, Windsor City Council member Deb Fudge, with an anti-business brush, and SCA also made a big contribution to an anti-Fudge fund. The money may have originated with PG&E, which also contributed directly to Gore’s campaign.

But perhaps the most interesting contribution to the Gore effort was the $85,000 that came in from the National Association of Realtors (NAR) — by far the biggest contribution to his effort.

NAR recently revised its funding strategy to focus on key races and has set up a fund for corporate donors, presumably a result of the Supreme Court’s Citizens United decision that opened the floodgates to unlimited deep-pocket donations.

Putting big money into Gore may have come as a consequence. Among the top players making the decision to focus NAR’s campaign contributions were major Northern California real-estate firms specializing in Silicon Valley properties — commercial, industrial, and residential.

Silicon Valley is expanding rapidly and has run out of space. That’s why it has moved into San Francisco and the East Bay, remaking their economies and gentrifying working-class neighborhoods for techie millionaires.

Sonoma County — and the rest of the North Bay — is a natural next step for this expansion.

Supervisor Gore may not have the programs of Silicon Valley or Big Wine on his agenda. He may shrug his backers off his shoulders and prove to be a man of the people. His upcoming votes on the Board of Supervisors will be the test.

Reprinted from the New Press/Nueva Prensa (May 2015)

Who the heck is this guy, Gore?
Proposed site of Dairyman winery center in Community Separator land 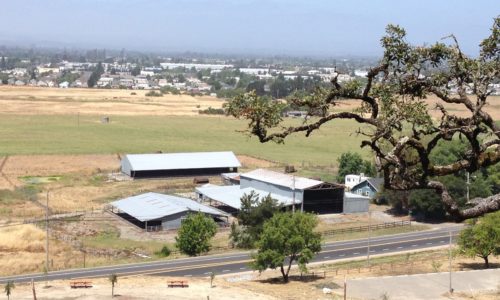 WWW meeting notes on Land Use policies in Sonoma County