As wild Coho salmon have disappeared in nearly every tributary of the Russian River, Felta Creek remains a rare exception. Even in the low fish years of 2006 and 2008, endangered wild Coho survived in the shady pools of this boulder strewn west county stream. This spring, UC Sea Grant biologists discovered multiple spawning beds, or “redds,” in the creek’s gravel bars. Wild fish will be there again this summer.

Of the 160-acre property, the plan calls for logging on 146 acres. Of that, 130 acres are slated for Group Selection and Transition Harvest — essentially, multi-acre patch cuts. According to the California Geological Survey, “site slopes range from 10 to 80 percent gradients … geologic mapping identifies dormant and active deep-seated landslides as underlying the plan area.” How will heavy equipment, logging and hauling affect a slide-prone landscape?

The National Marine Fisheries Service, recognizing the need to protect Felta Creek, recommended measures to limit erosion and preserve more of the forest canopy. In a public meeting on June 15, it was noted that one of NMFS’s primary recommendations made it into the final plan. Anthony Lukacic, the CalFire official in charge of recommending the proposed timber harvest plan for approval, said he considered but rejected others, deciding that CalFire’s Forest Practice Rules would suffice if adequately implemented.

One official at the CalFire meeting expressed her agency’s concern about the THP applicant’s record: a cleanup and abatement order with the Regional Water Quality Control Board in 2002, as well as previous CalFire violations.

According to Don McEnhill, president of Russian Riverkeeper, “the stakes couldn’t be higher. Losing one of the single best juvenile Coho salmon habitats on Felta Creek that get baby Coho through the hot summer months would be a massive blow.”

“I have reviewed logging plans in Sonoma County for over 20 years, and this is one of the worst,” says Larry Hanson, president of Forest Unlimited. “There is the delicate and biologically important stream that runs through it. And there are critical safety issues related to schoolchildren and to local residents who use the one-lane gravel Felta Creek Road to get in and out of their homes.”

Community members and county officials, including Supervisor James Gore, are alarmed by the scope of the proposed hauling operation. The landowner claims an easement to use Felta Creek Road, a private one-lane gravel road that winds immediately adjacent to Felta Creek. Four full time families reside in the upper valley amidst some grape cultivation. The use and maintenance of this rural road have been sufficient to balance light traffic and the health of the fishery. But Felta Creek Road has never been used for hauling on the scale proposed by this industrial timber operation.

No traffic impact or safety studies of the hauling operation were completed as part of the timber harvest plan. Felta Creek Road has sharp turns around big trees, few turnouts, waterfall crossings and seeps, a mile-plus section of road susceptible to sedimentation. At the bottom is West Side School, with over 170 students who commute via Felta Road, a publicly maintained county road where traffic is already congested. Concerns about degradation of habitat as well as fire and public safety were filed during the public comment period that closed on Monday, June 26. Outside of dust abatement, CalFire regards the hauling operation to be a civil matter — separate from the harvest plan. 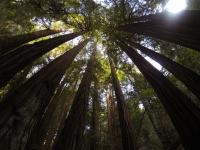 While CalFire considers final approval of the plan, the 160-acre TPZ-zoned property also happens to be for sale. This means a buyer, or coalition of buyers, could potentially prevent logging in this critical watershed.

Does it make sense to deforest the hills around one of Sonoma County’s last vital places for wild fish to complete their life cycles? There has to be a better way.

Dan Imhoff is an author, small-scale farmer and musician and has resided on Felta Creek Road with his wife, Quincey and their family, for more than 15 years.