As county officials in Napa & Sonoma keep approving water gouging crops like wine and cannabis, we are moving rapidly to drought with no real measures in place like mandatory rainwater catchment (think Australia where they dealt with drought head on and no longer need desalinization plants).

Sonoma supervisors: if you want to build 30,000 new units, require rainwater catchment or ditch the wine industry. You can’t have your cake and eat it to. Just where is that water coming from? The Eel River can’t afford to loose any more water to the cover 1,000 illegal water draws on the Russian River for grapes that have been documented for years with no action.

A Hot, Dry Winter in California. Could It Be Drought Again?

Atmospheric conditions that helped create the recent multiyear California drought have returned, leaving the state dry and exceptionally warm this winter and its residents wondering if another long dry spell is on the way.

A ridge of high-pressure air off the West Coast has persisted for much of the past three months, blocking many Pacific storms from reaching California and weakening others that do get through. Normally such ridges tend to come and go, but they also lingered during the 2012-16 drought, the worst in the state’s history.

“We are now seeing another year that looks like one of those drought years,” said Daniel Swain, a postdoctoral researcher at the Institute of the Environment and Sustainability at the University of California, Los Angeles, who during the drought coined the term “ridiculously resilient ridge” to describe the atmospheric pattern.

“This one is definitely a resilient ridge, but we don’t know if it’s quite reaching the ‘ridiculous’ threshold,” said Dr. Swain, who blogs about California’s weather.

By one measure, at least, drought has already returned. According to the United States Drought Monitor, most of the southern half of California is now experiencing moderate or severe drought, a marked change from three months ago, when less than 10 percent of the state was in moderate drought and no part was in severe drought.

The Los Angeles area has been especially dry. Dr. Swain said that Los Angeles has had only one 24-hour period with rainfall of more than one-third of an inch in nearly a year. The one exception, Jan. 8-9, was the day the Santa Barbara area just to the north was inundated with even more rain, leading to deadly mudslides.

But overall, the current conditions are far less extreme than in 2015 and 2016, at the tail end of the drought. At times in 2015 more than half the state was considered to be in extreme drought, the drought monitor’s highest category. That spring, the state imposed a mandatory 25 percent reduction in water use in urban areas.

State water officials note that this year, as a result of the drought-ending rains of a year ago, there is plenty of water in California’s reservoirs, so there are no critical supply issues that could lead to similar restrictions.

Even so, the dry, warm weather that has persisted since late fall is taking a toll, with snowpack in the Sierra Nevada — the source of about one-third of California’s water — at 21 percent of normal on Monday. Without a flurry of storms to add to the snowpack in the next few months, the low snowpack could eventually lead to supply problems, especially if dry conditions persist for the next few years. 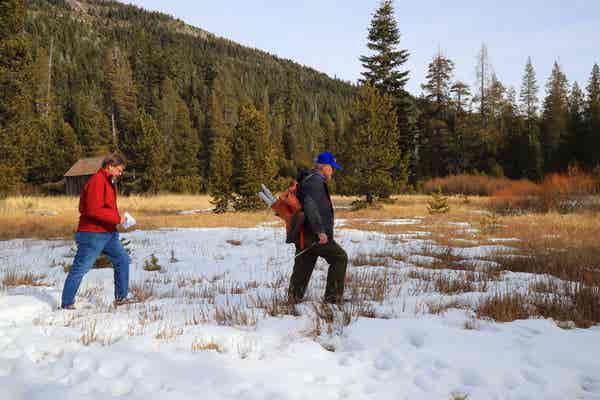 The high-pressure ridge tends to shunt storms north toward British Columbia, said Marty Ralph, director of the Center for Western Weather and Water Extremes at the Scripps Institution of Oceanography.

“It’s very normal to have a ridge,” said Dr. Ralph, who studies so-called atmospheric rivers, trails of tropical moisture that in a normal year are responsible for much of California’s precipitation. “It usually breaks down at some point and packs of storms break through.”

A few studies have suggested that the persistence of such blocking ridges in certain parts of the world may be linked to climate change. But a range of conditions in the Pacific Ocean not necessarily related to climate change, including El Niño and La Niña, can contribute to the formation and positioning of a ridge, Dr. Swain said.

The thin California snowpack is also a function of high temperatures. Following a record warm summer and fall in the state, temperatures have continued well above normal this winter. In the Sierra town of Truckee, Calif., on Thursday the high temperature, 64, was 21 degrees above the historical average.

“What we’re seeing is more precipitation as rain than as snow,” said Doug Carlson, a spokesman for the state Department of Water Resources. The warmer temperatures raise the snow line, the elevation above which it is cold enough that precipitation falls as snow. They also cause what snow there is to melt faster.

Rain runs off immediately, while snowpack serves as a reservoir of water that is released over time as it melts. So, changes in the proportions of snow and rain and the rate of snowmelt can affect the availability and timing of water for people, industry and agriculture..

The snowpack conditions in the Sierra this year may be an extreme example of what scientists suggest will be the case with climate change — that as average temperatures rise, average snowpack will decline, perhaps by as much as 25 percent by midcentury.

The blocking pattern in the atmosphere has also brought warm, dry conditions to the Rocky Mountains and the Colorado River basin, said Greg Smith, a senior hydrologist with the National Weather Service in Salt Lake City.

“The pattern is very strong this year,” Mr. Smith said. Most of the storms track to the north of the region, he said, “and the storms that do come in tend to be weak.”

The situation in the lower Colorado basin — most of Arizona and parts of Utah, New Mexico, Nevada and California — is especially bad, with snow totals at or near record lows at many locations.

As in California, the upper Colorado basin — parts of Arizona, New Mexico, Utah, Colorado and Wyoming — had plenty of snow runoff last year, Mr. Smith said. But without significant snowfall by April, even the upper basin will suffer. His forecast for the runoff this year into Lake Powell, the reservoir at the junction of the upper and lower basins, is the seventh-lowest in history, with expectations that the reservoir will receive less than half of its usual supply from melting snowpack.

“There’s definitely some concern for supplies in some areas as we see these forecast numbers drop,” Mr. Smith said. “We’re kind of hopeful we’ll see a pattern change in the next couple of months. We’re running out of time.”

Henry Fountain covers climate change, with a focus on the innovations that will be needed to overcome it. He is the author of “The Great Quake,” a book about the 1964 Alaskan earthquake.@henryfountainFacebook