The Center for Biological Diversity: “…….only 76 of these West Coast orcas are left in existence.”

Young whales, like a two-year-old named Sonic, are dying of severe malnutrition. Sonic was last seen in the fall emaciated and swimming lethargically alongside his mother and father. He disappeared, assumed dead, shortly after.

The Trump government has abandoned these intelligent creatures to a tragic fate. So the Center’s launched an 11th-hour legal action to save them.

Our fight to save West Coast orcas needs your help. Please — give to the Endangered Species Defense Fund so we have access to the funds we need for a fast, uncompromising fight for our orcas. 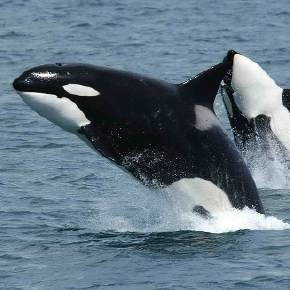 Three years ago, in response to a Center petition, the National Marine Fisheries Service agreed to expand orcas’ protections for critical foraging grounds off the West Coast by 2017. But it never followed through on this promise.

It’s infuriating that we have to force the government to do its job. Southern Resident killer whales are one of the most endangered species on the planet, but the Fisheries Service keeps dragging its feet on ensuring they have enough food to survive.

Now, thanks to the agency’s inaction, only 76

of these West Coast orcas are left in existence — a 30-year low. There isn’t a moment to lose. Mother orcas are losing 2 out of 3 of their young.

A planet without these intelligent, graceful creatures is unthinkable. Orcas form lasting social bonds with each other, where everyone cares for the young, sick or injured.

Grandparents can live to be up to more than 100 years old, but only if their food source isn’t plundered by corporate profiteers and they’re given safe space in the ocean to thrive.

We’re fighting with everything we’ve got to save these creatures from the tragedy of starvation and extinction. Any delay in saving them is unacceptable.

We’ve got the legal expertise and firepower to bring endangered species like West Coast orcas back from the brink. But we need you with us.

Please give today to our Endangered Species Defense Fund.