Like “Sonoma Sustainable” wine industry does their own version and still uses some highly toxic chemicals…just a marketing ploy to confuse consumers and get higher prices on “sustainable” wines.

“But in terms of how vines are grown, Napa Green is actually much less demanding than organic practices. In the opinion of specialist, admittedly fairly fanatical, organic wine writer Monty Waldin, ‘Napa Green is similar to the New Zealand model and accommodates those who cannot or will not ditch the systemics and glyphosate [fertilisers, pesticides and herbicides]. These systems are designed to make you feel good about what you do and have always done whilst allowing you to stick some new stickers around your estate and on your label.’

How green is Napa Valley?

A version of this article is published by the Financial Times.

When John Williams of Frog’s Leap (pictured here) organised the first organic wine growing conference in Napa Valley in 1989, nine people turned up (‘and I paid seven of them’, he claims). At the end of this month the Napa Valley Grapegrowers will hold their seventh organic conference and have had to cap attendees at 120.

Napa Valley has apparently gone green. The proud boast is that there are more vineyards that have been certified organic in Napa than in any other county in California. By far the majority of organic vineyards are in Europe, especially Italy, France and Spain, with Austria and Alsace being particularly actively committed not just to organic viticulture but to the next step: biodynamics.

Despite the green credentials now being so widely touted by California’s wine growers and producers, there is still so much more to do, and no one believes this more, and more volubly, than John Williams, who co-founded Frog’s Leap in 1981. Frog’s Leap in Rutherford went through the laborious business of third-party organic certification back in 1988, and for years their vineyards looked like complete anomalies. Suddenly, in the middle of this valley full of luxuriant neat green rows punctuated by bare soil and irrigation pipes, there was this wild pasture that looked almost more like a flower garden than a vineyard. Williams embraced the notion of cover crops, dry farming and alternatives to agrochemicals many years before his neighbours – and had to put up with considerable derision as a result. 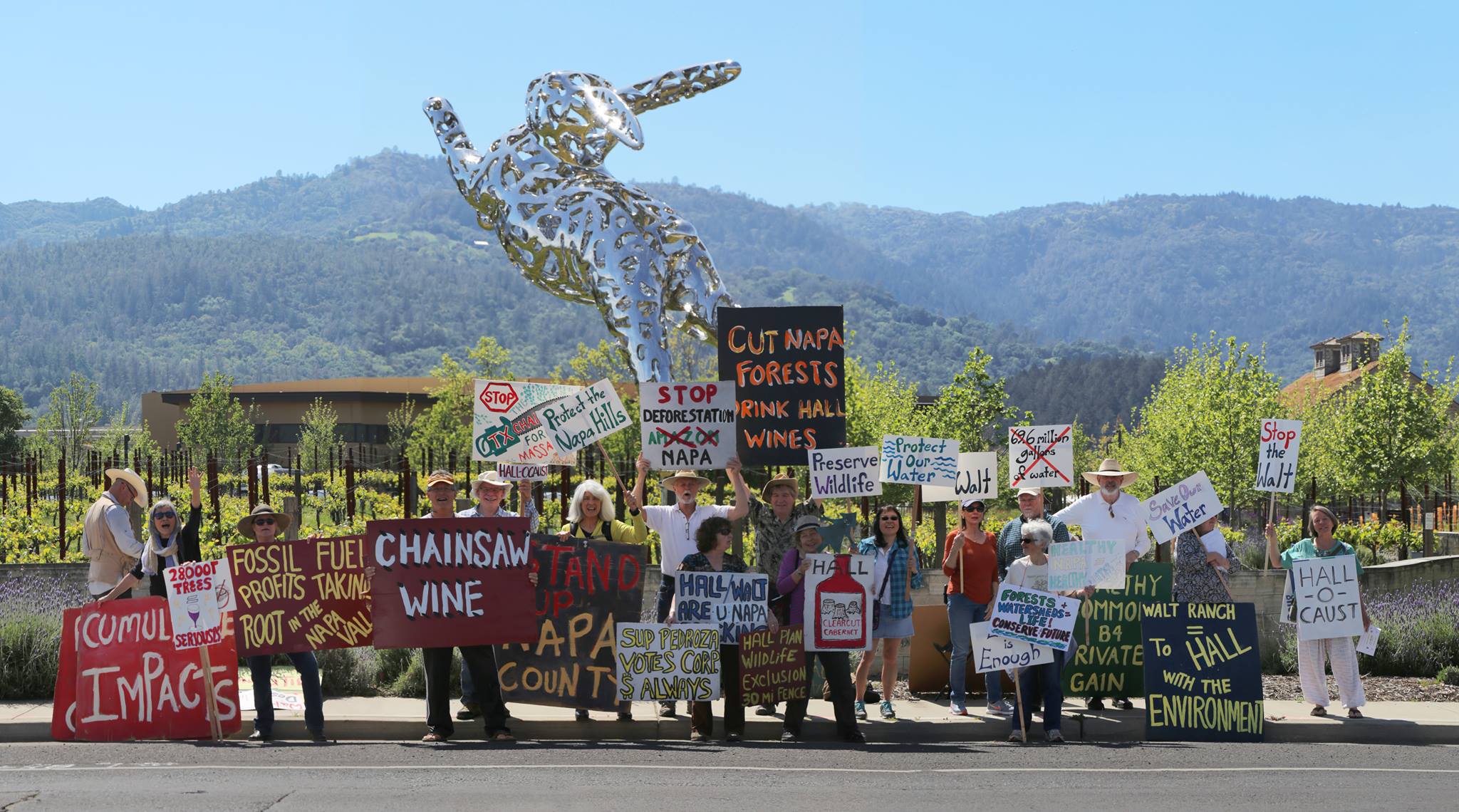 A good 250 miles south of Napa Valley in Paso Robles Jason Haas runs Tablas Creek, a Rhône-focused vine nursery and winery. Co-owners are the Perrin family of Château de Beaucastel, who were early adopters of organic viticulture in Châteauneuf-du-Pape back in the 1960s, so Haas has a good world view (his father was the US importer of Lafite and Petrus). He admits that California was late to the organic party.

Presenting wines and the sustainability issue with Haas in the London cellars of their UK importer Berry Bros & Rudd last week, John Williams agreed, but added, ‘where we’ve beaten everyone else hollow though is in what we’re so good at, promoting what we’re doing’.

He’s right. Napa Green is a relatively new certifying body and proudly lists 214 participating wineries (out of a total of 550 members of the Napa Valley Vintners association) and 183 vineyards. Its home page boasts that 52{5fc40a96f14c4a6aa4c2a32569b0a57dcc67c0b31eb04c341474283f11b6cdd2} of Napa Valley vineyard acreage is certified. The Napa Green certification looks like an impressively holistic approach – drawing up individual vineyard and winery plans to improve land and energy conservation, waste processes, and engagement with workers and neighbours. Social issues are certainly important. At Frog’s Leap, Williams and his son Rory are growing as many as 40 other crops commercially, albeit on a small scale, largely in order to provide year-round employment for the field workers on their 250 acres (100 ha).

But in terms of how vines are grown, Napa Green is actually much less demanding than organic practices. In the opinion of specialist, admittedly fairly fanatical, organic wine writer Monty Waldin, ‘Napa Green is similar to the New Zealand model and accommodates those who cannot or will not ditch the systemics and glyphosate [fertilisers, pesticides and herbicides]. These systems are designed to make you feel good about what you do and have always done whilst allowing you to stick some new stickers around your estate and on your label.’

Napa consultant winemaker David DeSante, on the other hand, is encouraged that many of the vine growers he advises are now looking for wholesome and sustainable alternatives to the agrochemicals they once unthinkingly used with such serious effects on the health of vineyard soils. One very visible sign of the greening of Napa is that, partly in response to the Fish Friendly Farming programme, fish have returned to the valley’s rivers and streams.

Ecological concerns are being fuelled, literally, by earth, wind and fire. According to DeSante, ‘we’re forcing ourselves into a crisis in Napa Valley because of climate change’. Williams believes – hopes? – that 2017 was the watershed vintage for northern California in terms of consciousness of the still-pressing need to change practices. The 2017 summer was so hot and dry that California suffered widespread wildfires last October that took a terrible toll on human life and the destruction of thousands of homes.

Water, or rather lack of it, is a massive and growing issue, and both John Williams in Napa (anti biodynamics) and Jason Haas (pro biodynamics) in even drier Paso Robles are firmly convinced that dry farming is the only sustainable option both for wine quality and for long-term survival.

Williams puts it in typically forceful fashion. ‘All of Napa Valley’s great wines – the Inglenooks of the 1940s and all the wines that did so well in the famous 1976 Judgment of Paris tasting – were made from dry-farmed vines. Irrigation was only introduced to the valley in 1976 but today 95 per cent of our vineyards are irrigated. It’s horse shit to say it’s impossible to dry farm in Napa Valley.’

As any gardener knows, young plants, including vines, have to be watered initially. When establishing Tablas Creek back in the 1990s, they originally put in irrigation lines and, as was the fashion then, went for densely planted vines on trellis wires. But more recent plantings have been of widely spaced, free-standing bush vines (the way things are done in Spain’s driest wine regions). Haas is thrilled by the resulting wine, and the continued health of the vine even in these past five years of drought. Dry-farmed vines also have much longer productive lives than heavily irrigated ones – not least because they develop so much deeper roots.

California’s Historic Vineyard Society is dedicated to preserving the state’s oldest vines, all dry farmed, some of them over 100 years old and still producing fascinating wine. The average lifespan of a Napa Valley vine is only 17 years today, according to Williams.

The reality, however, is that the stereotypical Napa Valley recipe of making high-alcohol, highly priced wines from irrigated grapes farmed by third parties using temporary labour is one of the most successful in the world. The likes of John Williams may justifiably rant about the iniquity of manipulation in the winery and short termism in the vineyard but real, deep-seated changes in attitude and behaviour must be hard to galvanise. So hats off to the growing number of wine producers there who are taking a long-term view.