Northbay’s Will Parrish writes for the Guardian:

Will Parrish and Sam Levin

Angeline Cheek is preparing for disaster. The indigenous organizer from the Fort Peck reservation in Montana fears that the proposed Keystone XL pipeline could break and spill, destroy her tribe’s water, and desecrate sacred Native American sites.

But environmental catastrophe is not the most immediate threat.

The government has characterized pipeline opponents like her as “extremists” and violent criminals and warned of potential “terrorism”, according to recently released records. 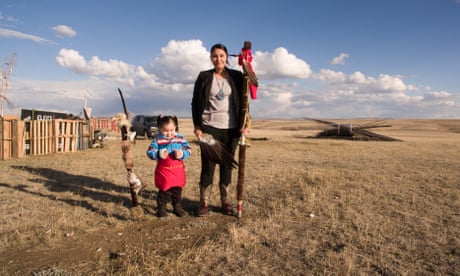 Life on the Keystone XL route: where opponents fear the ‘black snake’

The documents suggested that police were organizing to launch an aggressive response to possible Keystone protests, echoing the actions against the Standing Rock movement in North Dakota. There, officers engaged in intense surveillance and faced widespread accusations of excessive force and brutality.

“We have to stay one step ahead at all times,” said Cheek, a Hunkpapa and Oglala Lakota activist and teacher. “History is repeating itself.”

The proposed TransCanada project would carry a daily load of 830,000 barrels of oil over 1,204 miles – from Alberta, Canada to Montana, South Dakota and Nebraska, linking to the existing Keystone pipeline and Texas refineries. The path of the project, which was revived by Donald Trump last year, would cross dozens of rivers and streams and run near a number of Native American reservations, sparking legal challenges and a judge’s recent order for a full environmental review.

If the pipeline gets final approvals and construction advances in the coming months, some are anticipating massive demonstrations similar to the fight against the Dakota Access pipeline (Dapl). That conflict galvanized a global movement, but also led to FBI monitoring and the prolonged prosecution of hundreds of activists.

Documents obtained by the ACLU of Montana and reviewed by the Guardian have renewed concerns from civil rights advocates about the government’s treatment of indigenous activists known as water protectors.

A US justice department intelligence specialist told the Guardian the terrorism training was an annual presentation not specific to Keystone. But the ACLU noted that its records request was specifically about the pipeline protests, suggesting that authorities considered the session relevant to Keystone preparation.

The repeated mass arrests at Standing Rock led to a litany of charges, but hundreds were eventually dismissed due to lack of evidence. Police deployed water cannons, teargas grenades, bean bag rounds and a wide array of weapons in North Dakota.

“Many of our residents were in Standing Rock, and they saw the level of violence that could be visited on us,” said Remi Bald Eagle, the intergovernmental affairs coordinator of the Cheyenne River Sioux tribe, which is located along the Keystone route. “There’s a level of anxiety and fear because we don’t know what’s going to happen.” 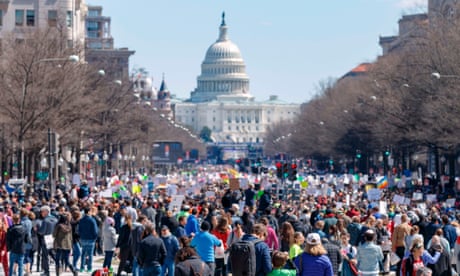 The ACLU of Montana, which filed a lawsuit this month against the government seeking Keystone records, earlier obtained a DHS report that said pipeline protesters were engaged in “criminal disruptions and violent incidents”. The report included two past cases of alleged “environmental rights extremists” committing violence.But the events in question – a 2012 bombing and a 2015 shootout with police – had no clear links to any environmental protests, said Mike German, a former FBI agent and fellow with the Brennan Center for Justice.

“Treating protest as terrorism is highly problematic,” said German noting that the US government has long labeled activism as “terrorism”, once claiming that filing public records requests was an “extremist” tactic. “It’s an effective way of suppressing protest activity and creating an enormous burden for people who want to go out and express their concerns.”

The “terrorist” and “extremist” labels can be used to justify brutality and a militarized operation, said Andrea Carter, an attorney with the Water Protector Legal Collective, a group that has represented Standing Rock defendants.

They are instant experts on quashing the indigenous insurgency. It’s very, very concerning

“It’s a really egregious tactic,” she said, noting that the labels also lay the groundwork for prosecutors to turn low-level misdemeanor cases into federal felony trials. “A lot of it has to do with public relations.”

The Montana documents have also shone a light on the coordination between governments across state lines, raising questions about how extensively law enforcement was devoting resources to Keystone protests before they had materialized. An email from the Montana fish, wildlife and parks department from earlier this year said state officials had conducted “extensive conversations with North Dakota to learn what worked and what didn’t work” when responding to Dapl demonstrations.

Montana authorities have done further training sessions on harnessing social media and have begun monitoring posts of anti-pipeline activists, a sheriff said at one meeting, according to a local news report.

The records also highlighted the existing relationships between law enforcement and TransCanada. A county sheriff included a TransCanada executive on communications about one law enforcement training. In August 2017, the Montana Petroleum Association, a trade group, also hosted a panel on “environmental activism” in the state, featuring three law enforcement officers alongside TransCanada’s senior security adviser.

Rachel Lederman, a civil rights lawyer representing Standing Rock activists in a civil case, said it was alarming to see that law enforcement from North Dakota was giving advice about future pipeline protests: “They are instant experts on quashing the indigenous insurgency. It’s very, very concerning, because what happened at Standing Rock was just a wholesale violation of civil rights.”

John Barnes, a Montana justice department spokesman, defended the preparation efforts, saying in an email to the Guardian that authorities were committed to protecting “the first amendment rights of everyone while also protecting private property and public safety”. He added: “In North Dakota, bad actors associated with the Dakota Access pipeline protests maliciously targeted public officials and law-enforcement personnel online, and so it is important that people be prepared here.”

important that people be prepared here.”

Some activists said the law enforcement tactics would not deter them from Keystone opposition efforts – whether in court or on the ground.

“We’ve got a lot against us. We’re the underdog,” said Lance Four Star, the Fort Peck Assiniboine council chairman, who recounted a recent incident of harassment and heckling by a pro-pipeline, pro-Trump group while the tribe was doing a ceremony. “I may never see the results of my efforts in my lifetime, but hopefully our grandchildren will. What we’re protecting now is this water we inherited.”

Peck said she was also concerned about a potential increase in violence against indigenous women, stemming from the “man camps” where oil workers live. But the Montana wildlife department appeared to minimize this concern in one of the records, saying, “Although man-camps bring a certain degree of law enforcement challenges, the primary enforcement focus is protest activity.”

Organizers have discussed a “variety of strategies” to oppose construction, including “prayer camps” similar to Standing Rock, said Cheyenne River Sioux tribal member Joye Braun, who organized against Dapl and has been involved in Keystone efforts.

“Clearly, they’re scared of the power of our movement,” she said, adding that she accepted the reality that she may be under surveillance when she travels the pipeline route to meet activists. “We haven’t gone anywhere, and we’re just building momentum.”

Native Americans know the risks are immense. But the “terrorism” label would not intimidate them, said Leoyla Cowboy, the wife of Little Feather, who was recently sentenced to three years in federal prison for “civil disorder” at Standing Rock.

“As indigenous people, it’s embedded in our DNA. It’s our obligation to stand up.”