Stop biodiversity loss or we could face our own extinction, warns UN

The world has two years to secure a deal for nature to halt a ‘silent killer’ as dangerous as climate change, says biodiversity chief

The world must thrash out a new deal for nature in the next two years or humanity could be the first species to document our own extinction, warns the United Nation’s biodiversity chief.

Ahead of a key international conference to discuss the collapse of ecosystems, Cristiana Pașca Palmer said people in all countries need to put pressure on their governments to draw up ambitious global targets by 2020 to protect the insects, birds, plants and mammals that are vital for global food production, clean water and carbon sequestration.

“The loss of biodiversity is a silent killer,” she told the Guardian. “It’s different from climate change, where people feel the impact in everyday life. With biodiversity, it is not so clear but by the time you feel what is happening, it may be too late.”

The loss of biodiversity is a silent killer.

Pașca Palmer is executive director of the UN Convention on Biological Diversity – the world body responsible for maintaining the natural life support systems on which humanity depends.

Its 196 member states will meet in Sharm el Sheikh, Egypt, this month to start discussions on a new framework for managing the world’s ecosystems and wildlife. This will kick off two years of frenetic negotiations, which Pașca Palmer hopes will culminate in an ambitious new global deal at the next conference in Beijing in 2020.

Conservationists are desperate for a biodiversity accord that will carry the same weight as the Paris climate agreement. But so far, this subject has received miserably little attention even though many scientists say it poses at least an equal threat to humanity.

The last two major biodiversity agreements – in 2002 and 2010 – have failed to stem the worst loss of life on Earth since the demise of the dinosaurs.

The issue is also low on the political agenda. Compared to climate summits, few heads of state attend biodiversity talks. Even before Donald Trump, the US refused to ratify the treaty and only sends an observer. Along with the Vatican, it is the only UN state not to participate.

Pașca Palmer says there are glimmers of hope. Several species in Africa and Asia have recovered (though most are in decline) and forest cover in Asia has increased by 2.5{5fc40a96f14c4a6aa4c2a32569b0a57dcc67c0b31eb04c341474283f11b6cdd2} (though it has decreased elsewhere at a faster rate). Marine protected areas have also widened.

But overall, she says, the picture is worrying. The already high rates of biodiversity loss from habitat destruction, chemical pollution and invasive species will accelerate in the coming 30 years as a result of climate change and growing human populations. By 2050, Africa is expected to lose 50{5fc40a96f14c4a6aa4c2a32569b0a57dcc67c0b31eb04c341474283f11b6cdd2} of its birds and mammals, and Asian fisheries to completely collapse. The loss of plants and sea life will reduce the Earth’s ability to absorb carbon, creating a vicious cycle. 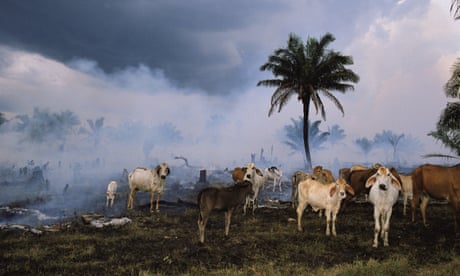 “The numbers are staggering,” says the former Romanian environment minister. “I hope we aren’t the first species to document our own extinction.”

Despite the weak government response to such an existential threat, she said her optimism about what she called “the infrastructure of life” was undimmed.

One cause for hope was a convergence of scientific concerns and growing interest from the business community. Last month, the UN’s top climate and biodiversity institutions and scientists held their first joint meeting. They found that nature-based solutions – such as forest protection, tree planting, land restoration and soil management – could provide up to a third of the carbon absorption needed to keep global warming within the Paris agreement parameters. In future the two UN arms of climate and biodiversity should issue joint assessments. She also noted that although politics in some countries were moving in the wrong direction, there were also positive developments such as French president, Emmanuel Macron, recently being the first world leader to note that the climate issue cannot be solved without a halt in biodiversity loss. This will be on the agenda of the next G7 summit in France.

“Things are moving. There is a lot of goodwill,” she said. “We should be aware of the dangers but not paralysed by inaction. It’s still in our hands but the window for action is narrowing. We need higher levels of political and citizen will to support nature.”