“The Trump rule would maintain requirements for permission to pollute bigger bodies of water, the rivers that empty into them and the wetlands that touch them. Courts had already blocked the rule from taking effect in 28 states, but allowed it to proceed in the other 22.

“The Trump administration will stop at nothing to reward polluting industries and endanger our most treasured resources,” said Jon Devine, director of the federal water program at the Natural Resources Defense Council.”

List of waterways land users must obtain permits to pollute to be scaled back, which could also allow pollution in drinking water 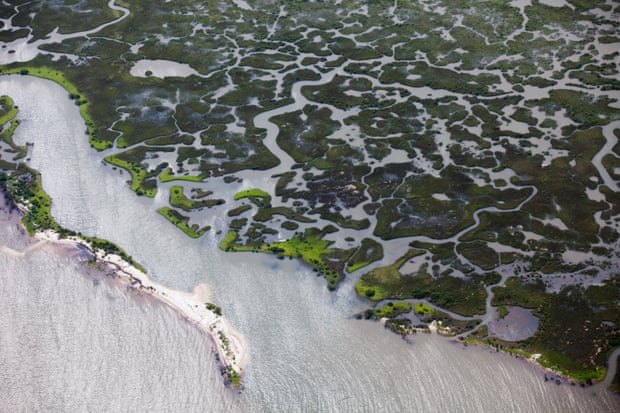 Aerial view of Louisiana’s marshlands threatened by the BP oil leak in the Gulf of Mexico. Migratory birds pass through the wetlands and much of America’s seafood comes from the region. Photograph: Julie Dermansky/Corbis via Getty Images

The Trump administration is planning to strip Obama-era pollution protections from thousands of US streams and millions of acres of wetlands, in a move environmentalists warn will harm vital wildlife and could allow pollution into drinking water.

The federal government plans to scale back the list of waterways for which land users are required to obtain permits to be able to pollute, according to a description of the proposal by officials before text was made available.

That pollution includes agricultural runoff from fertilizers and pesticides and other industry waste, which can flow from smaller tributaries or wetlands into major bodies of water. The vast network of waterways covered by the current protections provide drinking water to  around 117 million Americans.

Andrew Wheeler, acting administrator of the Environmental Protection Agency (EPA), said the Obama-era regulations are a “power grab” that aimed to control farmers, developers and landowners.

“More landowners had to go through a costly and time consuming process that runs counter to our Republican form of government,” Wheeler said, as he signed the proposed rule flanked by Republican lawmakers and Ryan Zinke, the interior secretary. “This ends years of uncertainty over where federal jurisdiction begins and ends.”

Zinke added that there is a “lot of anger in the west over federal overreach” which he claimed Trump administration was addressing.

Mark Ryan, a former water expert at the EPA who helped write the original regulation, said the Trump administration seems poised to reverse core parts of the 2015 rule, as well as some of the protections that were in place before then.

The 2015 Obama rule drew on hundreds of peer-reviewed studies, but the Trump rewrite focuses on a reinterpretation of the agency’s legal authority.

Environmental experts said the change could harm wetlands that are home to fish and wildlife and help protect against floods and naturally purify water. They said it could allow pollution into connected drinking water sources, too. The proposal comes as the administration is also rescinding climate change and pollution rules for coal plants and cars, weakening efforts to save at-risk species and introducing drilling and mining on what were protected areas.

The move would fulfill a key Trump campaign promise, and is likely to be put forward as a move that protects the rights of farmers, landowners and real estate developers. Under the new rule, major rivers would fall under federal protection while converted cropland, wastewater treatment systems and most ditches on the roadside on or farms would not.

Conservatives have seen the Obama-era rule – known as the Waters of the US (WOTUS) rule, which was published by the EPA and the army corps of engineers – as federal overreach. Trump’s acting environment administrator Andrew Wheeler argued the Obama standard “further expanded Washington’s reach into privately-owned lands”, putting local decisions in the hands of distant “bureaucrats”.

EPA’s water chief David Ross told reporters the agency did not conduct any modelling ahead of the planned move, including of how climate change will alter water flows.

“Our job is to implement what power we’ve been given by Congress and to stay within the limitations of that executive branch delegation,” Ross said. “We’ve considered some of the scientific terminology and scientific information we have, but our job is to really draw a line where we think our legal authority allows us to do that.”

The Trump rule would maintain requirements for permission to pollute bigger bodies of water, the rivers that empty into them and the wetlands that touch them. Courts had already blocked the rule from taking effect in 28 states, but allowed it to proceed in the other 22.

Further legal action, waged by environmental groups, is likely in the wake of the EPA’s reversal of protections.

“The Trump administration will stop at nothing to reward polluting industries and endanger our most treasured resources,” said Jon Devine, director of the federal water program at the Natural Resources Defense Council.

“This proposal is reckless, and we will fight to ensure it never goes into effect.”