Republicans stand between two-thirds of working poor and a raise, this week in the war on workers

in the war on workers 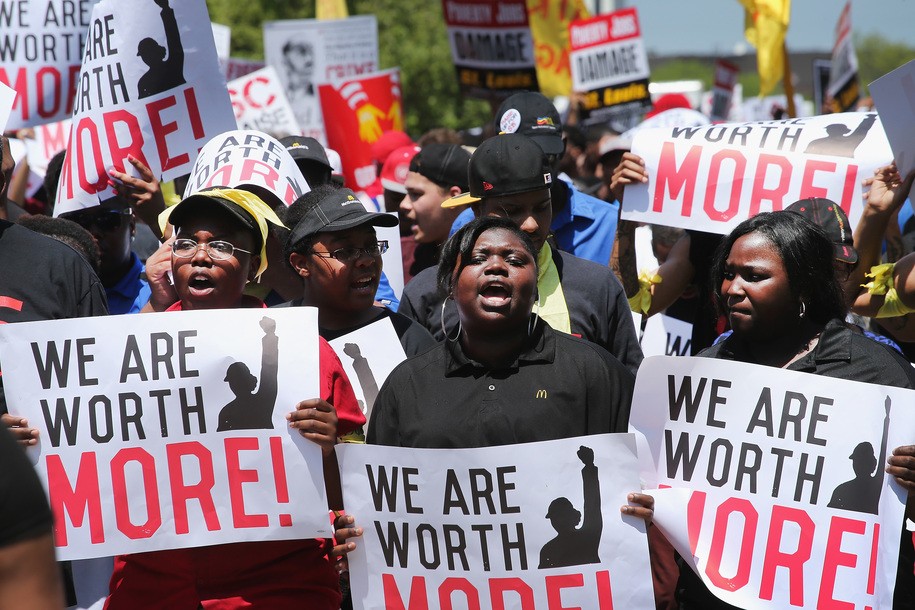 Every year it feels like this must be it: the low-hanging fruit and some of the pretty damn high-hanging fruit have been picked when it comes to raising state minimum wages, and momentum is surely going to grind to a halt. Somehow, it doesn’t. Already in 2019, New Jersey has passed a $15 minimum wage bill and the Illinois legislature has done the same, with new Democratic Gov. J.B. Pritztker expected to sign. (The two states’ laws are different, but the end point is $15.)

But the place we never see any progress is where it would affect the most people. The federal minimum wage last rose in 2009, to $7.25 an hour, and congressional Republicans were in a position to block further increases for the rest of Barack Obama’s presidency. Now, Republicans in Congress and the White House stand in the way of a non-poverty level minimum wage. Democrats have introduced a $15 minimum wage bill, but until Democrats take the Senate and the White House, it’s not going anywhere.

Let’s talk about what that $15 minimum wage bill would do, though, because Republicans should have to face consequences for their actions, and working people should know what Republicans are doing to them. Here’s the bottom line, from the Economic Policy Institute: “All told, raising the minimum wage to $15 by 2024 would directly or indirectly lift wages for 39.7 million workers, 26.6 percent of the wage-earning workforce.” The average worker who would be directly affected—that is, who would get a raise because they earned less than the new minimum wage—would get an extra $4,000 in pay if they work all year.

Across the board, “Two-thirds (67.3 percent) of the working poor in America would receive a pay increase if the minimum wage were raised to $15 by 2024.” Republicans always claim to value work, but they are dead set against two-thirds of the working poor getting a raise.

Never let it be said that Republicans stand for the American People or a working Economy. They would rather shoot themselves on 5th street, than to acutally pass a bill or law that would benefit the American worker and thus the economy itself. They can not get it through their heads that “uber-riche” by themselves will not, and can not keep the economy flowing.  You would think after two centuries of history showing otherwise, they would get that the Economy Works when the People work.

Maybe if we put it into a analogy that they can understand:
When the Money is sitting in a bank in a billionaires account, it is like the Electricty in a battery; e.g No flow, no power = no work.

When the money flows through the system, “Flow and  Power equals work”

You can’t drive the drive the car if the flow of electricity is only one way, to the battery.

Of course they value work…they just don’t think that the benefits of that work should accrue to those who are performing the work.