“The oil and gas industry has no greater friend than President Donald Trump,” Mike Pence said.

“About seven in 10 voters of all ages now worry about climate disruption, and 56 percent of respondents to a recent poll said they consider the Democratic Party’s view on climate change to be mainstream. Only 29 percent said the same of the GOP. Eighty percent of likely Democratic caucus goers in Iowa said they want presidential candidates to spend a lot of time talking about climate change, second only to health care.”

Almost no one was surprised that the annual budget released by the White House on Monday once again proposed slashing billions of dollars in federal spending on environmental protection and renewable energy research. The budget is considered an agenda-setting document for the Trump administration, and President Trump is apparently the fossil fuel industry’s best friend.

“And the oil and gas industry, I want to promise you, has no greater friend than President Donald Trump,” Vice President Mike Pence said in a Friday address to the Ohio Oil and Gas Association, an industry and lobbying group that has grown powerful with the shale fracking boom.

With an audience of fossil fuel industry insiders gathered in Columbus, Ohio, Pence listed off clean air and water protections the Trump administration has rolled back as the U.S. becomes the largest producer of oil and gas on the planet. Pence claimed that New York’s decision to ban fracking hurt the state’s economy, repeating a recent industry claim that was quickly debunked by analysts. He only alluded to climate change once, while boasting about Trump’s decision to withdraw the U.S. from the Paris climate agreement.

Meanwhile, in Iowa, presidential hopeful Sen. Bernie Sanders was sending a much different message, telling a crowd of supporters at a campaign rally on Friday that a “political revolution” would transform the country and take energy production in an entirely different direction. This movement would tell Trump and his friends in the fossil fuel industry that climate change is not a “hoax,” but an “existential threat” to the nation and the planet.

“And we intend to transform our energy system away from fossil fuel to energy efficiency and sustainable energy and, in the process, when we do that, we’re going to create millions more decent paying jobs,” Sanders said.

Back in Ohio, Pence assured fossil fuel executives that such a transformation would not happen as long as Trump is in office, and oil and gas production would remain central to the government’s plan for maintaining global power.

While Pence and Sanders come from opposite ends of the political spectrum, their statements reveal how the political divide over domestic energy production has become an expansive chasm. Of course, there has always been a rift between industry polluters and environmentalists, but with Trump in office and deadlines to avert climate catastrophe looming, the debate over fossil fuels in the U.S. has never been so partisan and polarized among candidates and elected leaders. Each side of the debate presents starkly different visions of the future.

Trump’s vision is one of “energy dominance,” where the U.S. becomes the longstanding worldwide leader in oil and gas production as other wealthy countries attempt to transition away from fossil fuels. Pipelines, petrochemical refineries and drilling rigs increasingly dominate our landscapes as drilling and infrastructure expands on public lands and oceans.

“The oil and gas industry has no greater friend than President Donald Trump,” Mike Pence said.

Under the vision offered by the climate justice movement and progressives like Sanders, the U.S. becomes a leader in renewable and clean energy production, thanks to hefty public investments meant to address carbon pollution and spur economic growth.

“I think that it’s already the case that climate change — and with that, issues of energy — are bigger issues than they really have ever been before,” said Mitch Jones, the climate and energy program director at Food and Water Watch, an environmental group that supports a “just transition” to renewable energy.

Climate is a potent issue for Democrats, who are under mounting pressure from young people and the left to break all ties with the fossil fuel industry and embrace a Green New Deal, a set of broad proposals for massive public investment in a renewable energy economy. Rep. Alexandria Ocasio-Cortez, the democratic socialist star from New York City, is working with youth activists to spearhead the Green New Deal in Congress. Hundreds of thousands of students worldwide are preparing for mass school strike to demand action on climate change on March 15.

About seven in 10 voters of all ages now worry about climate disruption, and 56 percent of respondents to a recent poll said they consider the Democratic Party’s view on climate change to be mainstream. Only 29 percent said the same of the GOP. Eighty percent of likely Democratic caucusgoers in Iowa said they want presidential candidates to spend a lot of time talking about climate change, second only to health care.

“Climate change is playing a much larger role than it’s played really in any presidential campaign before, and that includes when somebody like Al Gore [was] running,” Jones said. “Democrats either have to support a Green New Deal, or they better have an alternative that they think addresses those same concerns.”

Newly empowered Democrats in the House have focused on climate and energy production with a series of hearings and legislative proposals, despite protests from Republicans. Climate and fossil fuels are on the top of the agenda in the House Natural Resources Committee, where Democrats are grilling administration officials about Trump’s effort to achieve “energy dominance” by stripping away environmental regulations and opening huge swaths of public lands to drilling. 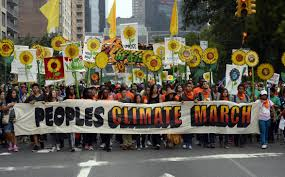 One recent hearing compared the fossil fuel industry’s campaign to downplay the dangers of climate disruption to efforts by tobacco companies to quash health concerns about their products. Republicans sidelined the hearing with a procedural maneuver. Democrats are also demanding environmental enforcement records from federal regulatory agencies run by Trump appointees with close ties to the fossil fuel industry. This is a big shift for many Democrats, who said little while oil and gas production grew significantly under President Obama.

“So, let’s look at the chart of skyrocketing oil production and ask ourselves, why do oil companies need more public land?” said Rep. Alan Lowenthal (D-California) during a subcommittee hearing Tuesday on Trump’s “energy dominance” agenda. “Why do they need more of our oceans? Ask yourselves, is gutting health and safety regulations really necessary? Is letting the industry call the shots really necessary?”

Meanwhile, the fossil fuel industry is facing intense grassroots resistance to new pipelines and infrastructure projects across the country. Fracking has created a natural gas glut and prices for oil and gas are low, leaving investors increasingly wary. With global panic over climate disruption growing and leading Democrats now suggesting that the industry’s days could be numbered, Jones said oil and gas firms are facing pushback from Wall Street as well.

“The change is coming, so you shouldn’t be investing all this capital in [oil and gas] infrastructure, because you are going to lose it,” Jones said.

Despite having “no greater friend” than the sitting president and quickly becoming the global leader in production, the fossil fuel industry is on the defensive. Oil and gas firms are responding aggressively, having already made nearly $200 million in political contributions during the past two election cycles, mostly to Republicans. With the Green New Deal gaining momentum, major oil firms are throwing their support behind “free-market” climate legislation that would put an escalating tax on carbon emissions while shielding the industry from lawsuits and new regulations as climate disruption continues.

Oil and gas companies are taking advantage of Trump’s tenure to rapidly expand infrastructure in order to lock in oil and gas production for years to come, even as policymakers are pushing for a transition. This means the industry is physically expanding into ecosystems and communities, often generating public opposition from residents and environmentalists concerned about the impacts of pipelines, refineries and transfer stations.

“They see the writing on the wall. They now see that momentum is on our side, not their side, and they are scared of it,” Jones said. “They want to get as much [infrastructure] in as possible, so they have that argument that making this transition is going to wipe off millions in investments.”

The U.S. is at a carbon crossroads. We know fossil fuel production and consumption drive climate-disrupting carbon emissions, and with Trump in the White House, the U.S. oil and gas industry is booming like never before. However, a clear majority in the U.S. is excited about developing alternatives to fossil fuels, and politicians are responding, breaking the powerful industry’s grip on establishment politics.

Whether the U.S. will become a world leader in wind, solar and other renewables or a lumbering oil and gas state could very well be decided in the next presidential election. A victory for Trump would be a victory for the “energy dominance” agenda, allowing the expanding industry to unleash the nation’s vast oil and gas reserves for decades to come. However, if a progressive or a Green New Dealer who supports robust public investment in renewables emerges from the Democratic primaries, it would send a powerful message to investors and policymakers alike. A victory for such a candidate could finally shift the economic and political tides away from fossil fuels for good.