“The research, published in the journal Science of the Total Environment, found herbicides, fungicides and insecticides, as well as antimicrobial drugs used in livestock. The risk to people of antimicrobial drug resistance is well known, but Johnston highlighted resistance to fungicides too. “There are some pretty nasty fungal infections that are taking off in hospitals,” he said……….The pollution was so severe in places that the ditchwater itself could have been used as a pesticide.“

Pesticides and antibiotics polluting streams across Europe | Environment | The Guardian

Pesticides and antibiotics are polluting streams across Europe, a study has found. Scientists say the contamination is dangerous for wildlife and may increase the development of drug-resistant microbes.

More than 100 pesticides and 21 drugs were detected in the 29 waterways analysed in 10 European nations, including the UK. A quarter of the chemicals identified are banned, while half of the streams analysed had at least one pesticide above permitted levels.

The researchers said the high number of pesticides and drugs they found meant complex mixtures were present, the impact of which was unknown. Pesticides are acknowledged as one factor in plummeting populations of many insects and the birds that rely on them for food. Insecticides were revealed to be polluting English rivers in 2017.

“The importance of our new work is demonstrating the prevalence of biologically active chemicals in waterways all over Europe,” said Paul Johnston, at the Greenpeace research laboratories at the University of Exeter. “There is the potential for ecosystemic effects.”

The research, published in the journal Science of the Total Environment, found herbicides, fungicides and insecticides, as well as antimicrobial drugs used in livestock. The risk to people of antimicrobial drug resistance is well known, but Johnston highlighted resistance to fungicides too. “There are some pretty nasty fungal infections that are taking off in hospitals,” he said.

One of the world’s biggest pesticide makers, Syngenta, announced a “major shift in global strategy” on Monday, to take on board society’s concerns and reduce residues in the environment.

“There is an undeniable demand for a shift in our industry,” said Alexandra Brand, the chief sustainability officer of Syngenta. “We will put our innovation more strongly in the service of helping farms become resilient to changing climates and better able to adapt to consumer requirements, including reducing carbon emissions and reversing soil erosion and biodiversity decline.”

Another major pesticide manufacturer, Bayer, said on Monday it was making public all 107 studies submitted to European regulators on the safety of its controversial herbicide glyphosate.

“Transparency is a catalyst for trust, so more transparency is a good thing for consumers, policymakers and businesses,” said Liam Condon, the president of Bayer Crop Science. In March, a federal jury in the US found that the herbicide, known as Roundup, was a substantial factor in causing the cancer of a California man. 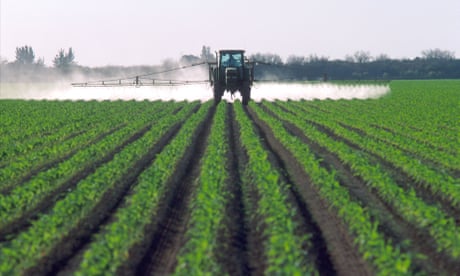 The testing techniques used in the new research meant only a subset of pesticides could be detected. Two very common pesticides – glyphosate and chlorothalonil – were not included in the study, meaning the findings represent a minimum level of contamination. The research focused on streams, as these harbour a large proportion of aquatic wildlife.

The detection of many pesticides that have long been banned was not necessarily due to continued illegal use, the scientists said, but could be the result of leaching of persistent chemicals that linger in soils. The study took place before the most widely used insecticides were banned by the EU for all outdoor uses.

Irish Water said on Monday that EU pesticide levels were being breached in public water supplies across Ireland. In Switzerland, another new study found that soils in 93% of organic farms were contaminated with insecticides, as were 80% of the areas farmers set aside for wildlife.

Research revealed in 2013 that insecticides were devastating dragonflies, snails and other water-based species in the Netherlands. The pollution was so severe in places that the ditchwater itself could have been used as a pesticide. A study in France in 2017 found that virtually all farms could slash their pesticide use while still producing as much food.

Johnston said: “Farmers don’t want to pollute rivers, and water companies don’t want to have to remove all that pollution, so we have to work to reduce reliance on pesticides and veterinary drugs through more sustainable agriculture. This is not a case of us versus farmers or water companies.”