“Wild fish can swim away from the algae belt while farmed fish is trapped.

Harmful algal blooms happen when the normally occurring aquatic plants grow out of control due to warm, still weather, among other factors. The algae is continuing to spread, the Norwegian Directorate of Fisheries said.”

Surge of algae kills millions of salmon in Norway 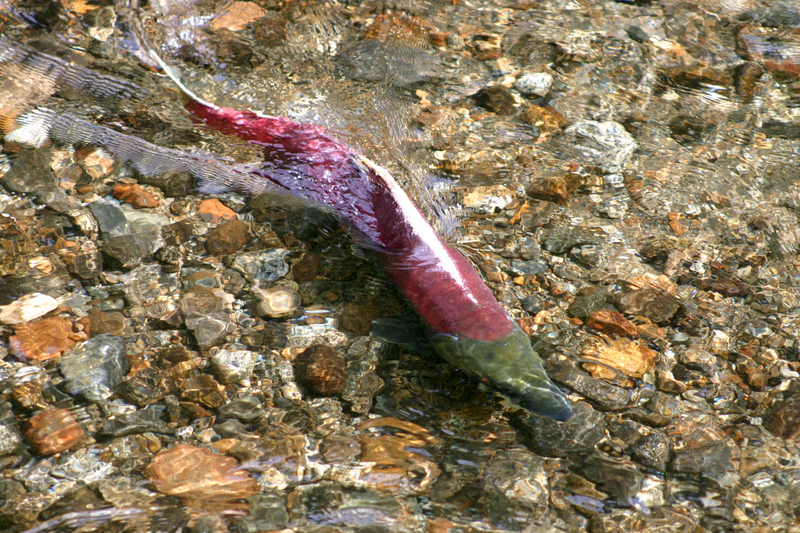 OSLO (Reuters) – A surge of algae has killed an estimated 8 million salmon at Norwegian fish farms over the past week, wiping out more than half of this year’s expected sales growth, the state-owned Norwegian Seafood Council said on Wednesday.

The algae, which has spread rapidly around the coast of northern Norway, sticks to the gills of the fish, suffocating them. Wild fish can swim away from the algae belt while farmed fish is trapped.

Harmful algal blooms happen when the normally occurring aquatic plants grow out of control due to warm, still weather, among other factors. The algae is continuing to spread, the Norwegian Directorate of Fisheries said.

The Directorate of Fisheries said on Tuesday more than 10,000 tonnes of farmed salmon, with a sales price of some 620 million Norwegian crowns ($70 million), had perished, but Seafood Council said the loss would be much greater.

“It’s too soon to say how big the losses will be for the producers. Preliminary numbers point to 8 million dead fish, corresponding to 40,000 tonnes of salmon that won’t reach markets,” Seafood Council analyst Paul Aandahl said.

Norway, the world’s largest exporter of salmon, will likely see about half of the expected growth in salmon volumes wiped out this year as a result, and prices are likely to rise, said Lars Konrad Johnsen, analyst at Fearnleys.

“Providing the net effect is something in the area of 20- to 30 thousand tonnes, this means you lose around half of the growth that was to come this year – and that will no doubt affect prices,” Johnsen said.

While many smaller fish farmers in Northern Norway have been hit hard, none of the large listed salmon farmer such as Mowi or Leroy had were affected, Johnsen said, and were likely to benefit from coming increasing salmon prices in the second half of the year.

Norway exported 1.24 million tonnes of salmon in 2018, up 2.5 percent from 2017, according to data from Statistics Norway. This year, Fearnley had expected a volume growth of around 4 percent.

“There will be a significantly lower growth, there is no doubt about that,” Johnsen said. “From an investor perspective it’s only positive – I think there will be a negative effect on the price this week, but think the estimate is 1-2 crowns price increase for the second half of the year.”

Salmon farmer Salmar said on Wednesday the company had harvested a large volume of fish in northern Norway in the first quarter due to unrelated infection-prevention measures, which had hit results.