Copper is benign compared to most of the horrific chemicals used in the vineyards.

It should be the more eco-friendly option, but is organic viticulture bad for the environment?

A decade ago, the very idea of journalists denigrating organic methods would have been almost sacrilegious.

When I started my writing career, the hype over the organic wine movement was reaching fever pitch – today the vast majority of Americans believe that organic foods are healthier, and better for Mother Nature.

It has become the easiest sales pitch in the world: pay a little more for food that doesn’t require the application of synthetic chemicals. Consumers far and wide now “understand” that naturally derived chemicals are so much better for your health and the environment.

Of course, a chemist might argue that dioxin, the most toxic man-made compound available, is still a million times less dangerous than botulinum, which is derived from a bacterium called Clostridium botulinum. We have Mother Nature, not man, to thank for that nasty little 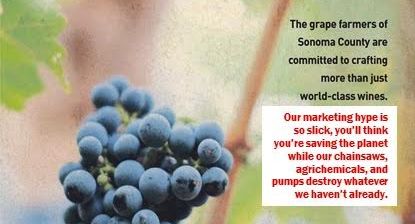 creation. Nevertheless, such arguments are probably lost on eco-friendly shoppers. The popularity of organic food and wine is not going away anytime soon.

Yet as the European viticultural debate increasingly coalesces around sustainable viticulture, a growing number of voices are starting to publicly question whether organic methods are long overdue a dressing down.

Europe’s pioneer in this regard was the inimitable Dr Richard Smart, a frequent critic of the furore surrounding organic and biodynamic viticulture. He described the hype as reaching “ludicrous levels” in 2018.

“Let us not forget that organic methods still permit the use of copper in the vineyard, which is arguably the most harmful chemical input you can use in winegrowing,” says Smart. His repeated assertion that organic growers’ often liberal application of the Bordeaux mixture is hardly eco-friendly has struck a chord with several Champagne houses.

“AR Lenoble’s 18 hectares of vineyards have been certified Haute Valeur Environnementale since 2012. We are practising near-organic viticulture with one important caveat,” says Christian Holthausen, AR Lenoble‘s export and communications director.

“We do not feel comfortable treating mildew with copper sulfate since we are worried about the long-term effects of copper in the soil. It rains more in Champagne than almost any other region in France. Mildew is a recurring problem. If we have to treat it periodically with drastic limits on the use of phytosanitary inputs to control both mildew and powdery mildew, we would prefer to treat it periodically rather than to introduce large amounts of copper into the soil.”

Many other wine producers have shared similar views, off the record.

However, Torres‘ beef with organics takes it one step further. The Spanish producer underlines the point that organic methods typically result in higher C02 omissions – hardly a gold standard in environmental protection.

“I think the key difference between sustainable and organic viticulture is that organics do not sufficiently take climate change into consideration; in general organic vineyards need more treatments with sulfur or bouillie bordelaise, which means more C02 emissions,” explains Miguel A Torres, president of Familia Torres.

He continues: “A few years ago a research project coordinated by the University of Zaragoza concluded that organic vineyards have a 22 percent higher CO2 footprint than traditional vineyards. The other important point is that the copper from the bouillie bordelaise is toxic for the soils.”

Torres’ remains a key advocate of promoting sustainable winemaking across the world. Their Torres & Earth program aims to reduce CO2 emissions by 30 percent per bottle by 2020 in comparison with 2008. They have invested more than 12 million euros and have reduced their C02 footprint by 25.4 percent (certified by Lloyd’s in 2017) across the board.

So their influence is considerable, which suggests that other producers may heed their warning that organic viticulture has its downsides.

There are also other factors to consider. The longer-term effects of using “natural” pesticides and heightened levels of the Bordeaux mixture are unknown. Conventional, man-made pesticides are highly regulated and have been for some time.

Yet their PR is at an all time low. There have been several high-profile media stories over the past few years, scrutinizing the health and social impacts of the use of synthetic chemicals in viticulture. A lawsuit from the daughter of a vine grower, James-Bernard Murat, who died from cancer linked to his use of pesticides over a 40-year period, was reported around the world. But can growers prove definitively that organic methods carry no potentially harmful side-affects, both to the environment and personal heath? On the former point, Torres would claim they can’t.

Meanwhile, the organic and natural-products industry is estimated to be worth an estimated $63 billion worldwide. According to a report by Academics Review, a group founded by University of Illinois nutritional scientist Bruce M. Chassy and University of Melbourne food scientist David Tribe, the organic industry has engaged in a “pattern of research-informed and intentionally-deceptive marketing”.

Nevertheless, its advocates remain firmly convinced that organic viticulture is the right way forward for the industry.

“We don’t want to change to sustainable certification as it won’t be an improvement, on the contrary, it is less stringent than the organic methods we employ,” says Arthur Larmandier, of Champagne Larmandier-Bernier.

Ultimately, of course, it’s up to the individual producer to decide how best to manage their vineyards. Traditional, organic, sustainable or biodynamic – take your pick. But I would add that a healthy scrutiny of the numerous claims made by advocates of organic and biodynamic viticulture is long overdue. As Smart observes: “There is no hard evidence that organic or biodynamic viticulture improves the quality of the wine, or the health of the vine.”

On the latter point, I couldn’t say. However, marketeers and wine merchants have made numerous claims to me about organic wine over the years, statements that deserve a large dose of skepticism.

They always insist that organic wine is better for the environment; Torres says otherwise. They argue it’s safer – show me the hard evidence? They claim it tastes better; it doesn’t. Lastly, I was once sold the myth that organic wine never induces a hangover.

Trust me. It does.