“As the authors conclude, “Our findings support the hypotheses that prenatal and infant pesticide exposures to these substances increase the risks for autism spectrum disorder, and exposures in infancy could contribute to risks for more severely impaired phenotypes with…intellectual disability.”

This study is the largest of its kind to date. The co-authors end their paper ominously: “From a public health and preventive medicine perspective, our findings support the need to avoid prenatal and infant exposure to pesticides to protect early brain development.” 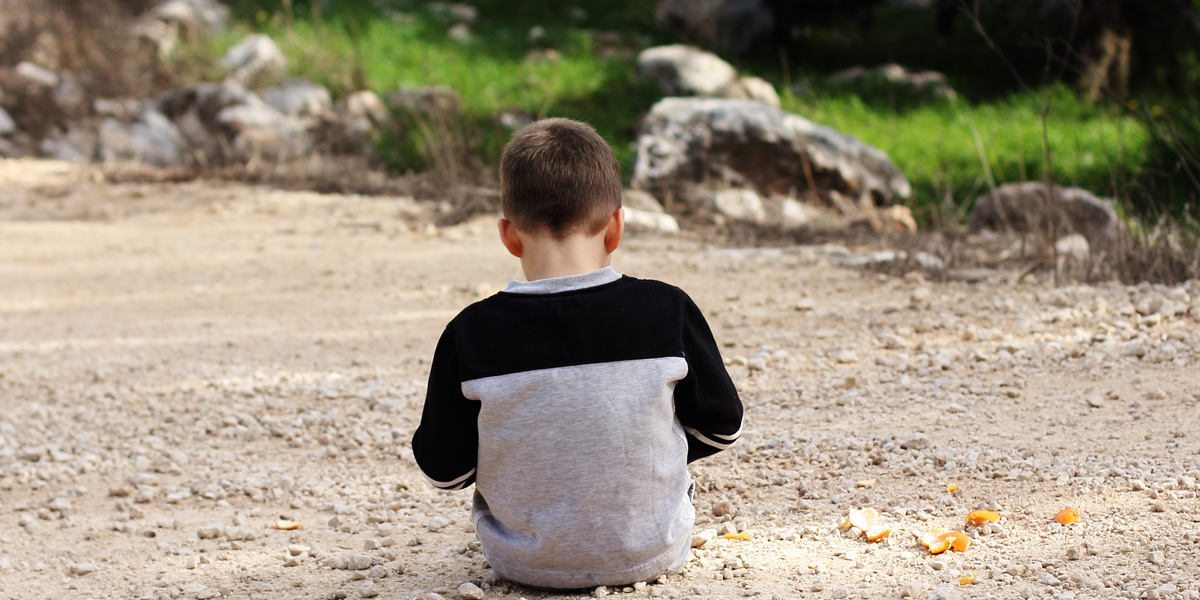 Use of 11 pesticides (including glyphosate) within 2,000 meters of a family’s home during developmental periods correlated with increased risk of autism. Report by Rachel Benbrook

A multidisciplinary research team including epidemiologists, bio-statisticians, and neurologists has identified a link between prenatal and infant pesticide exposure and increased risk of developing autism spectrum disorder (ASD) for residents of California’s Central Valley.

The UCLA-based team started with a database of almost 3,000 people with a diagnosis of ASD born between 1998–2010 in eight counties in the Central Valley, the state’s most productive agricultural region.

They then estimated pesticide exposures for families with a child with ASD, drawing on California’s mandatory Pesticide Use Reporting Program, or CA-PUR. This database provides the most detailed, place-based pesticide use records available anywhere in the world, and is why such a significant share of the state-of-the-art pesticide epidemiology studies assess human health risks in California. 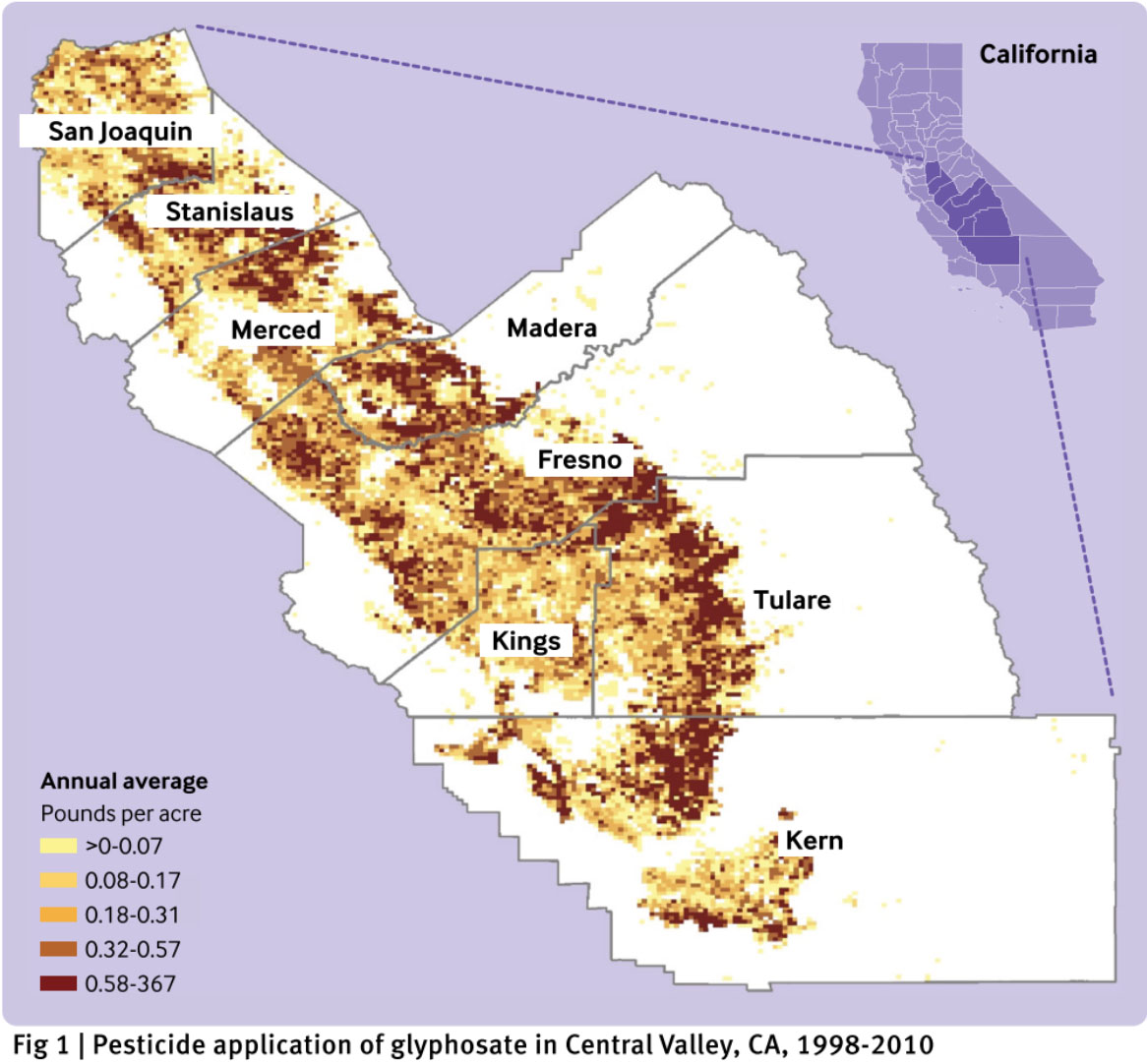 An example of the pesticide use maps generated for this paper – this one for glyphosate. Darker colors = heavier use. From von Ehrenstien et al., 2019

To determine which compounds to include in the analysis, the researchers started with a list of the top 25 pesticides based on application rates, selecting those that have documented reports of neurodevelopmental impacts in peer-reviewed literature.

Use of these 11 pesticides within 2,000 meters of a family’s home during the three developmental periods was correlated with increased risk of ASD. The team used a common epidemiological measurement called an odds ratio (OR) that determines if levels of exposure are associated with increased health impacts.

An OR is a probabilistic estimate of the degree to which exposure levels move in tandem with the frequency and/or severity of some adverse health outcome, like ASD or cancer. After correcting for other possible, confounding factors, scientists calculated a point-estimate of the odds ratio, as well as the range in values that the true OR is likely to fall within 95{5fc40a96f14c4a6aa4c2a32569b0a57dcc67c0b31eb04c341474283f11b6cdd2} of the time. An OR above 1 that is accompanied by an estimated range that begins at 1 or a higher value, is regarded as statistically significant, whereas an odds ratio over 1, but with an estimated range of values that begins below 1 (e.g. the range 0.9 to 1.4) is regarded as suggestive of an impact, but not as strongly as the case when the lower-range value is over 1.

Autism rates have been rising sharply over the last decade-plus. While exposure to pesticides has been implicated, the cause of the overall increase, or any child’s autism, remains a stubborn mystery. Source: Autism Speaks In the UCLA study, development of autism was positively associated with exposure to some pesticides, especially during pregnancy. Prenatal exposure to almost all the pesticides studied increased the OR, but chlorpyrifos, avermectin, and diazinon were the most strongly associated with ASD. On the other hand, during the first year of an infant’s life, exposure to bifenthrin, malathion, and glyphosate showed a slight increase in the odds ratio for developing ASD. Then the team filtered out the 445 most severe cases of ASD that also exhibited intellectual disabilities. For this “nested” group of children, the ORs increased by 30–40{5fc40a96f14c4a6aa4c2a32569b0a57dcc67c0b31eb04c341474283f11b6cdd2} for exposure during pregnancy and infancy for glyphosate, chlorpyrifos, diazinon, permethrin, methyl bromide, and myclobutanil.

In other words, if you are a pregnant woman or mom of an infant living within 1.2 miles of where certain common pesticides are applied, the chances that your baby may develop autism are “small to moderately increased”. And if your child does develop autism, the risk of a more severe form that involves intellectual disabilities are even greater.

Babies and young children can be exposed to pesticides residues in food and water, via airborne particles, and through contact with dust or dirt at school, on playfields, or from crawling on floors. Cuddling with a pet, or mom or dad after they have been working in or near farm fields, can increase exposure levels.

As the authors conclude, “Our findings support the hypotheses that prenatal and infant pesticide exposures to these substances increase the risks for autism spectrum disorder, and exposures in infancy could contribute to risks for more severely impaired phenotypes with…intellectual disability.”

This study is the largest of its kind to date. The co-authors end their paper ominously: “From a public health and preventive medicine perspective, our findings support the need to avoid prenatal and infant exposure to pesticides to protect early brain development.

We end with a challenge. Look at the aerial photo below of a typical, rural American town, and ask yourself how the pregnant women and babies living here are supposed to avoid pesticide exposure? 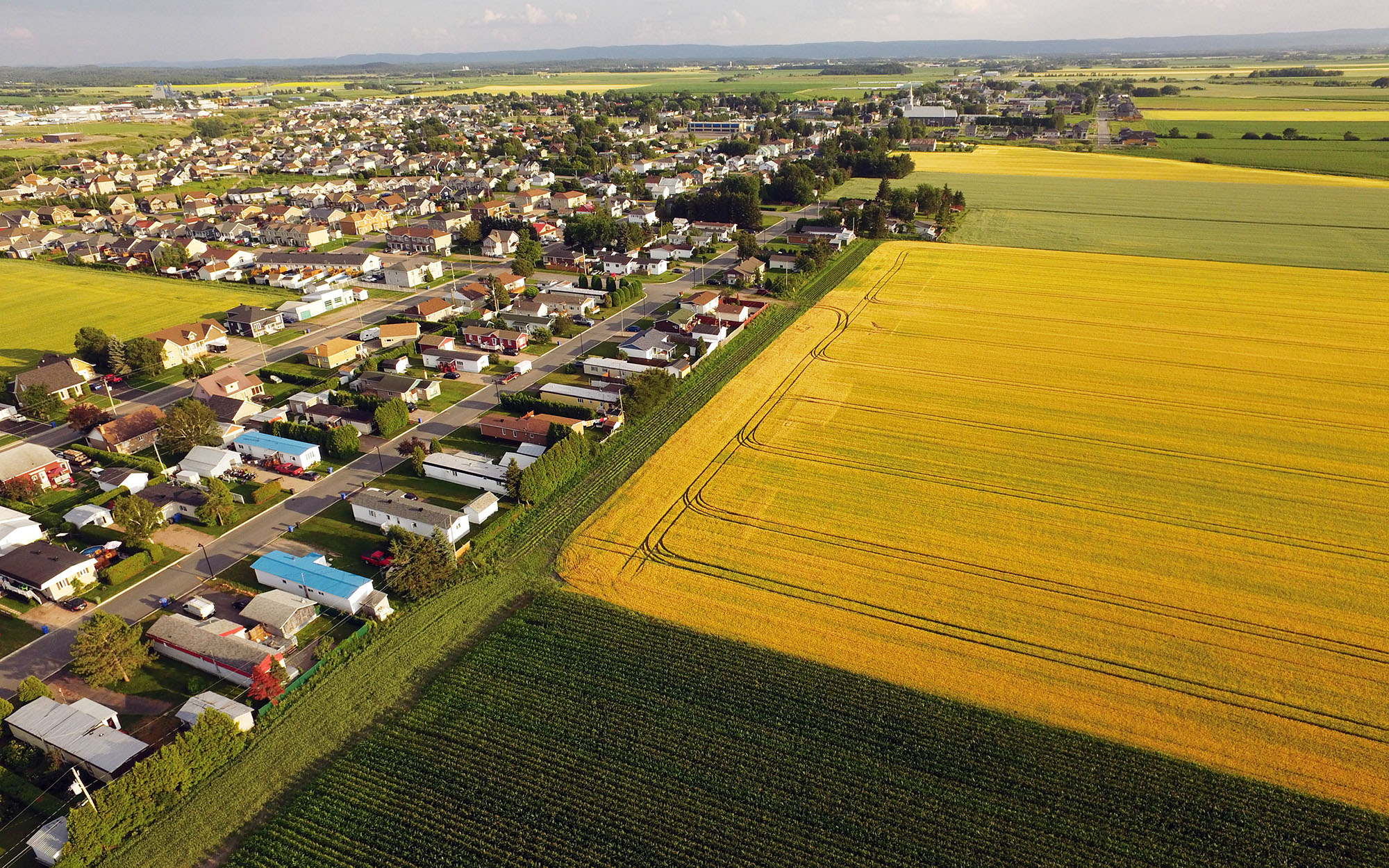 This article was first published on the Hygeia Analytics website. It is reproduced here with the kind permission of the author.

See also the GMWatch article of March 2019, “Early exposure to pesticides – including glyphosate – linked to increased risk of autism“.