“But an article published last month in Environmental Health, an academic journal, estimated that 15,500 cases of cancer in California could occur within 70 years because of unsafe drinking water.”

“Clean water flows toward power and money,” said Susana De Anda, a longtime water-rights organizer in the region. She is the daughter of lechugueros who worked in lettuce fields and helped make California one of the agricultural capitals of the world. “Homes, schools and clinics are supposed to be the safest places to go. But not in our world.”

As she spoke, Ms. De Anda drove through several towns where tainted water is a fact of life, here in the state’s agricultural center. In the foreground, along State Route 201, were miles of lush orange groves and dairy farms. Spotted out the passenger window of her silver Toyota was Stone Corral Elementary in the town of Seville, where century-old pipes contaminate the tap water with soil and bacteria. The school depends on grant money to pay for bottled water for students.

Though water contamination is a problem up and down the state, the failing systems are most heavily concentrated in small towns and unincorporated communities in the Central and Salinas Valleys, the key centers of California agriculture. About half of all failing water systems are in the agricultural San Joaquin Valley, in the southern section of the broader Central Valley, said Ellen Hanak, the director of the Water Policy Center at the Public Policy Institute of California.

Gov. Gavin Newsom has proposed a tax of about $140 million on urban water districts and the agriculture industry to pay for redevelopment in districts serving unsafe water. That money would come in addition to $168 million he has allocated toward water infrastructure improvements from a bond proposition passed last year.

Some have bristled at the proposed tax, given already high tax rates in the state and a budget surplus of more than $21 billion. The Association of California Water Agencies — whose members provide an estimated 90 percent of water distributed in the state — has spoken out against the governor’s proposed solution, arguing it would affect the cost of living in already-expensive California.

“There’s agreement with everyone involved in policy that there is a problem and it needs to be solved,” said Cindy Tuck, the group’s deputy executive director for government relations. But, “we think it doesn’t make sense to tax a resource that is essential.”

State Senator Melissa Hurtado, a Democrat representing the Fresno area, whose district is severely affected by tainted water, said she would like to see more money allocated for infrastructure spending, but believes a tax on water is a nonstarter. Last week, the Democratic-controlled State Senate budget subcommittee voted against the governor’s proposed water tax, in favor of recommending funding from the state’s general fund. The Legislature is expected to work out the details as part of broader budget negotiations, which will come for a vote in June.

But the debate in Sacramento feels far away in East Orosi, a farmworker community of about 500 nestled along the foot of the Sierra Nevada that is surrounded by fields of oranges. There, residents complain of conditions that resemble the developing world, not the richest state in the nation. Fears of nitrate exposure in the tap water — which numerous studies have linked to an increased risk of infant death, and at high levels, an elevated risk of cancer in adults — compound other difficult realities like faraway grocery stores and doctors, grueling work conditions, and a lack of political clout.

Veronica Corrales, the president of the East Orosi water board, wonders why more people are not outraged that, in 2019, people living in a state as wealthy as California lack such a fundamental necessity.

“Everyone is saying ‘America First,’ but what about us?” she said.

Many factors have led to the groundwater contamination reflected in the state’s data, but public health experts say the region’s agriculture industry has played an outsize role. Chemical fertilizers and dairy manure seep into the ground and cause nitrate contamination, like the kind plaguing East Orosi. Such contamination, which is common throughout the valley, takes years to materialize and even longer to clear up.

Arsenic is naturally occurring in some areas but can become worse with exhaustive groundwater pumping, which has been a longstanding problem in the valley and accelerated during the drought between 2012 and 2016.

It is exceedingly difficult to say with certainty whether any illness is directly tied to specific environmental factors, including contaminated water. But an article published last month in Environmental Health, an academic journal, estimated that 15,500 cases of cancer in California could occur within 70 years because of unsafe drinking water.

For years, Martha Sanchez and her husband, Jose — who live in East Orosi and make their living filling crates with oranges or picking cherries — have received notices from the local water system that their taps are unsafe to drink from because of contamination. The family spends at least $60 a month for tap water they can’t use, Ms. Sanchez estimates, which is factored into the rent. To cook and wash dishes, Ms. Sanchez ladles bottled water into pots and pans from heavy blue jugs kept in the kitchen. She and her children shower using the water from the pipes, but she says it makes their skin itch.

“Some people around here drink it,” Ms. Sanchez said. “Here at home, I don’t use it at all for cooking, not even for beans.”

Ms. Sanchez’s family is given five free five-gallon jugs of water every two weeks, funded by a grant from the State Water Resources Control Board that was secured by Self-Help Enterprises, a community organization. But, Ms. Sanchez says, it is never enough to hold the family over, and they buy an additional four gallons.

Martha Sanchez at her home in East Orosi. Ms. Sanchez’s family is given five free five-gallon jugs of water every two weeks, but she says it is never enough.CreditRozette Rago for The New York Times

Her husband, who is a supervisor in the fields, pays for clean water out of pocket for the employees he manages, because the farm does not provide it. Sometimes he brings in about $80 for a full day of work.

These problems are not new. The failing infrastructure at the heart of the potable water crisis in these communities is tinged with the legacy of rural redlining, said Camille Pannu, the director of the Aoki Water Justice Clinic at the University of California, Davis, who likened the situation in the valley to the one in Flint, Mich. “Flint is everywhere here,” she said.

“The fact that more than a million Californians in 2019 have been left behind is really appalling,” said Jared Blumenfeld, the secretary of the California Environmental Protection Agency. “I’ll never forget talking to people in Imperial and Coachella Valley who are like, ‘You know what, it’s amazing when we go back to Mexico, the water is better.’”

Mr. Blumenfeld said the “vast majority” of water systems with unsafe water are in small communities where there are too few customers to cover the cost of water treatment and maintenance. Laying even short distances of pipe can cost millions of dollars, which is sometimes feasible when costs are spread out among many people but not so for individual families, or when towns are especially remote.

“I’ve never seen as many small drinking water systems in any other state. California is unique in that way,” Mr. Blumenfeld said.

Many families who live in those areas use water from private wells because their homes are not connected to public water systems. The number of people exposed to dangerous water statewide could be even higher than the data shows: The state does not regulate private wells and does not monitor systems with fewer than 15 connections.

One solution for expanding potable water access could be for larger systems to absorb smaller systems, which would allow them to spread infrastructure costs across more customers. In the San Joaquin Valley, nearly 80 percent of disadvantaged communities without potable water are less than one mile away from other communities with safe drinking water, according to a 2018 report by the U.C. Davis Center for Regional Change.

But larger water systems are often wary of absorbing the smaller systems. In part, they do not want to absorb the costs that come with overhauling dilapidated infrastructure, said Ms. Hanak, the Water Policy Center director. 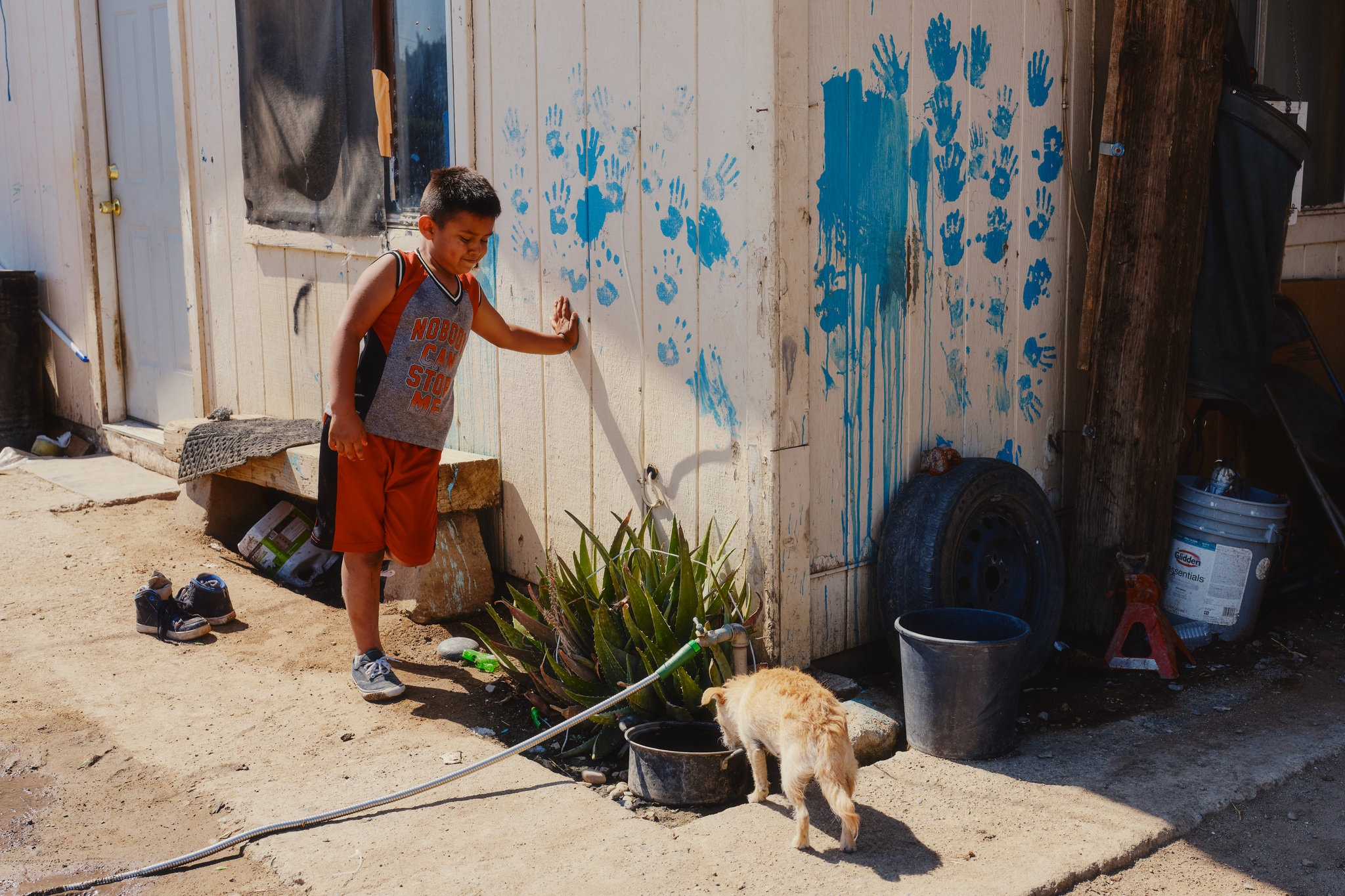 Often, community members also worry that adding lower-income customers from neighboring communities will leave them to foot the bill. And the poorer customers worry they will have to pay rates they cannot afford.

The East Orosi water district has teetered from one consolidation effort to another over the last decade, with little success. The state recently signaled that it would order nearby Orosi, which has clean water, to consolidate its system with East Orosi to expand clean-water access. Compelled by the state, the two communities have sought to negotiate a consolidation, but disagreements have left them at a stalemate.

“Because Orosi has clean water, they don’t want to take on rate payers from East Orosi who they think are so poor they’ll skip out on their bills,” Ms. Pannu said. “Unfortunately, you have poor people versus poorer people.”

E. Joaquin Esquivel, the chairman of the State Water Resources Control Board, said the gaps in potable water access were unacceptable, and promised that the state would continue using its consolidation authority to ease disparities. But he added that sustained funding for infrastructure and maintenance projects would be crucial for long-term solutions.

Ms. Corrales, a nurse, stepped in as the president of the East Orosi water board several months ago. There was no one else who wanted the job, she said, and she was voted in at a community meeting almost without realizing it.

Sometimes she is not sure whom she should be fighting: the state, the farm owners, the skeptics in Orosi. She just wants clean water.

A version of this article appears in print on May 21, 2019, on Page A12 of the New York edition with the headline: Lush Groves Everywhere, and Water Unsafe to Drink. Order Reprints | Today’s Paper | Subscribe