“In April, an agriculture ministry report said 63,700 animals died in 2018 because of deteriorating grazing conditions brought on by dry weather.

Namibia’s cabinet announced this week that the government would sell about 1,000 wild animals.”

Drought-hit Namibia has authorised the sale of at least 1,000 wild animals – including elephants and giraffes – to limit loss of life and generate US$1.1 million for conservation, the authorities confirmed Saturday.

“Given that this year is a drought year, the [environment] ministry would like to sell various type of game species from various protected areas to protect grazing and at the same time to also generate much needed funding for parks and wildlife management,” the environment ministry spokesman Romeo Muyunda said.

The authorities declared a national disaster last month, and the meteorological services in the southern African nation estimate that some parts of the country faced the deadliest drought in as many as 90 years. 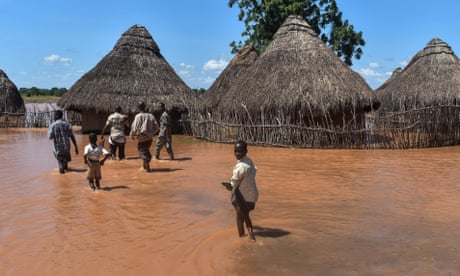 “The grazing condition in most of our parks is extremely poor and if we do not reduce the number of animals, this will lead to loss of an animals due to starvation,” Muyunda said.

In April, an agriculture ministry report said 63,700 animals died in 2018 because of deteriorating grazing conditions brought on by dry weather.

Namibia’s cabinet announced this week that the government would sell about 1,000 wild animals.

The aim is to raise $1.1 m that will go towards a state-owned Game Products Trust Fund for wildlife conservation and parks management.

The government said there were currently about 960 buffalos in its national parks, 2,000 springbok, 780 oryx and 6,400 elephants.

The auction was advertised in local newspapers from Friday.

Namibia, a country of 2.4 million people, has previously made calls for aid to assist in the drought emergency that has already affected over 500,000 people.

In April the government announced that it would spend about $39,400 on drought relief this year to buy food, provide water tankers and provide subsidies to farmers.

As the crisis escalates…

… in our natural world, we refuse to turn away from the climate catastrophe and species extinction. For The Guardian, reporting on the environment is a priority. We give reporting on climate, nature and pollution the prominence it deserves, stories which often go unreported by others in the media. At this pivotal time for our species and our planet, we are determined to inform readers about threats, consequences and solutions based on scientific facts, not political prejudice or business interests.

More people are reading and supporting The Guardian’s independent, investigative journalism than ever before. And unlike many new organisations, we have chosen an approach that allows us to keep our journalism accessible to all, regardless of where they live or what they can afford. But we need your ongoing support to keep working as we do.

The Guardian will engage with the most critical issues of our time – from the escalating climate catastrophe to widespread inequality to the influence of big tech on our lives. At a time when factual information is a necessity, we believe that each of us, around the world, deserves access to accurate reporting with integrity at its heart.

Our editorial independence means we set our own agenda and voice our own opinions. Guardian journalism is free from commercial and political bias and not influenced by billionaire owners or shareholders. This means we can give a voice to those less heard, explore where others turn away, and rigorously challenge those in power.

We need your support to keep delivering quality journalism, to maintain our openness and to protect our precious independence. Every reader contribution, big or small, is so valuable. Support The Guardian from as little as $1 – and it only takes a minute. Thank you.