“Supporters say Oregon’s program would be the most progressive of its kind in the country, as funds would be guaranteed for low-income people and communities of color, Native tribes and places hit “first and worst” by the impacts of climate change.

Oregon is poised to become the second US state after California to impose a cap and trade program aimed at reducing industrial carbon emissions.

But ahead of a vote on the legislation Thursday, all 11 Republican state senators fled the capitol in a bid to delay the process. Several claimed to have left the state, beyond the reach of state troopers dispatched by the governor in order to get the legislative session back on track.

Senate Republican leader Herman Baertschiger Jr wrote in a statement that the walk-out was “exactly how we should be doing our job”. In a speech on the Senate floor, a visibly frustrated Senate president Peter Courtney begged his colleagues to return. “This is the saddest day of my legislative life,” he said.

If passed into law, the clean energy jobs bill would place a cap on emissions from power, transportation and other industries in the state, and establish a system to auction and trade them. 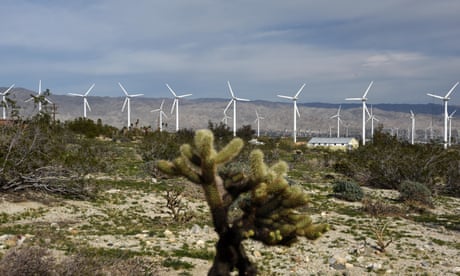 Not unlike the principles of the Green New Deal, Oregon’s “cap and invest” program would earmark funds generated by the program for clean energy, climate-related upgrades to infrastructure in order to better retrofit the state for increasing extreme weather events and green jobs training.

Supporters say Oregon’s program would be the most progressive of its kind in the country, as funds would be guaranteed for low-income people and communities of color, Native tribes and places hit “first and worst” by the impacts of climate change.

“Oregon can be the log that breaks the jam nationally” on progressive carbon emissions regulation and green investment, said Governor Kate Brown in a statement.

Redirecting the cost of climate change

California in 2013 became the first US state to establish its cap and trade program. The biggest share of those revenues so far has gone to high speed rail construction.

Oregon’s carbon market would join California’s in the Western Climate Initiative, which also includes Quebec – carbon credits could be auctioned across borders.

Carbon pricing essentially redirects the costs of climate change back to industry, by putting a price on carbon emissions and placing climate costs on company balance sheets. The logic behind creating a carbon market assumes that if it costs companies to pollute, companies will not pollute as much. A cap and trade policy is one approach to the scheme, as opposed to creating an actual tax on emissions by the ton.

The Union of Concerned Scientists says robust carbon pricing schemes are an integral economic policy tool in reducing emissions in order “to limit some of the worst impacts of climate change”.

While cap and trade schemes enjoy broad and in many cases passionate support among Democrats, carbon pricing has critics on the left and the right. Oregon Republicans claim the program is still essentially a tax, and thus would need to pass by a three-fifths majority in both the state house and senate, according to law.

“It’s our position that cap and trade systems don’t work and that they actually harm frontline communities,” said Shawn Fleek of Opal Environmental Justice Oregon. “We’re really witnessing a stark divide in the environmental and environmental justice communities with this process.”

If the bill is passed, the entire west coast could soon be capping and trading carbon emissions together.

While three attempts at implementing carbon pricing in Washington state have so far failed since 2016, legislators introduced another bill this March to implement a cap and trade program in that state. That bill is currently in committee.

• This article was amended on 21 June 2019 to correct the number of Republican senators who fled the building. An earlier version said 12; this has been corrected to 11.