“Biologists said they not sure why Allie was in poor health. This season has seen numerous grey whale deaths along the US west coast; scientists say a loss of sea ice in the Arctic could have damaged the whales’ food chain.”

A humpback whale has spent the past two weeks in the San Francisco Bay, fascinating sightseers, photographers, whale enthusiasts and marine biologists. But experts say the whale, which locals have nicknamed Allie, may be sick, and probably came into the protected waters to recover. 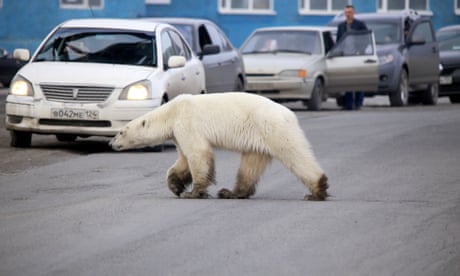 Stricken polar bear turns up in Siberian city, hundreds of miles from home

Biologists said they not sure why Allie was in poor health. This season has seen numerous grey whale deaths along the US west coast; scientists say a loss of sea ice in the Arctic could have damaged the whales’ food chain.

Humpback whales, however, migrate north from Mexico in the summer, and scientists say Allie’s case is probably unrelated to the grey whale deaths. Humpbacks are a common sight off the coast of California, and their numbers have increased since the 1970s when whaling was banned.

Bill Keener, a research associate at the Marine Mammal Center near San Francisco, said Allie appeared malnourished and “skinny”, lacking the healthy layer of blubber that humpbacks typically put on during the summer months as they feed. Its skin also lacked a humpback’s usual luster.

But Keener, who took part in a boating expedition to assess the whale, also said there was no way to know exactly what was wrong, and that the whale showed no signs of major external injury. The whale could have come into contact with toxic algae, or it may be ailing from old age. Scientists were unable to determine its age and sex. “Although everyone has been referring to it as Allie, it could very well be an Al,” Keener says.

Despite making a comeback, the humpback population along the California coast is still listed as “threatened” under the Endangered Species Act, and are most often are injured in collisions with ships. Some also get accidentally entangled in the nets and gear used in large-scale fishing operations.

An estimated 3,000 humpbacks come to feed along the coast of California,

Oregon and Washington each summer and autumn, but most of them congregate near the mouth of the Bay. Allie ventured deeper inside. “Our assumption was that the whale just needed some recuperation time,” said Keener.

The whale hasn’t been spotted for a couple of days and may have found its way back out to sea, according to Keener.

That’s good news for local whale enthusiasts, who flocked to the docks to watch Allie day after day, even creating a Facebook page for the humpback.

“I was sitting at the end of a dock, and the whale was literally passing me about 10ft away,” said Susie Kelly, a local photographer who captured the whale breaching, in a popular image that has since been widely featured in local news. “It was an amazing experience. But obviously, we were all hoping she’d recover.”