The tree that inspired Dr. Seuss’ Lorax has died 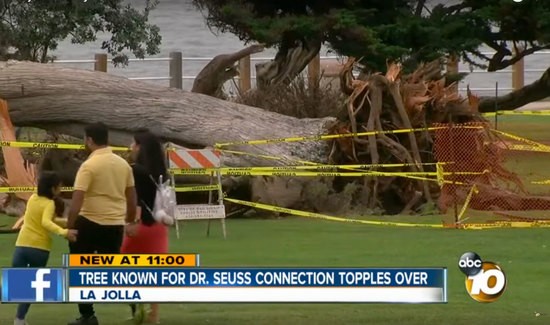 Mount Soledad in San Diego was the site where beloved children’s author Theodor Geisel—Dr. Seuss—wrote many of his stories. According to legend, from his home he could see what is now Ellen Browning Scripps Park in La Jolla, and in that space a single large Monterey Cypress tree stood. It was this tree that reportedly inspired the famed Truffula trees and story of The Lorax. San Diego local news reports that that very tree has fallen. According to parks officials, the tree was between 80 and 100-years-old, about two-thirds the lifespan of a Monterey Cypress.

A spokesman for the San Diego Parks and Recreation Department told CNN that they do not know exactly why the tree fell though they did mention there had been a lot of rain this winter. The story of the Lorax is a sad one where the Once-ler begins tearing down majestic Truffula trees in order to manufacture the wildly versatile Thneed garments. The Lorax attempts time and again to warn the Once-ler that he is destroying the beauty around him, but greed gets the best until nothing is left but one single Truffula seed. San Diego says it will be memorializing the stump left by the tree and finding another tree to plant nearby.

“Unless someone like you cares a whole awful lot, Nothing is going to get better. It’s not.”