The consolidation of the border-industrial complex, and its deep-rooted ties within the federal government, is topped by an army of lobbyists that sway legislation towards their business.  In total, from 2002 to 2019 there were nearly 20,000 reported lobbying visits related to homeland security.”

America’s Border-Industrial Complex: A Look at Who Is Profiting Off the Militarized Border

U.S. budgets for border and migration have more than doubled in the last 15 years and increased by more than 6,000 percent since 1980.

s United States President Donald Trump boasted Wednesday on the impenetrability of his U.S.-Mexico border wall, a new report by the Transnational Insitute shows that border militarization long pre-dates the Trump administration, in which both Republican and Democrats have forged “profitable” partnership between security firms to form a “powerful border–industrial complex.” 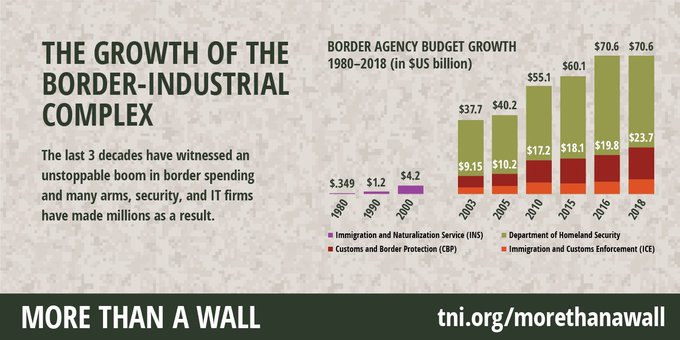 As the last three decades have witnessed an ever-growing boom in U.S. border spending, the report, titled ‘More Than a Wall’ and released Monday, shows “this political consensus has been forged to a significant degree by the world’s largest arms (as well as a number of other security and IT) corporations that have made massive profits from the exponential growth of government budgets for border control.”

According to the author Todd Miller, U.S. budgets for border and migration have more than doubled in the last 15 years and increased by more than 6,000 percent since 1980, as they rose from US$350 million to US$23.7 billion in 2018, under two agencies, the Customs and Border Protection (CBP) and Immigration and Customs Enforcement (ICE).

“A closer look at border policy over the last decades, however, shows that Trump is ratcheting up – and ultimately consolidating – a long-standing U.S. approach to border control,” Miller explains.

For the U.S. president, migration is one the main campaign promises and preferred scapegoat to address structural problems, regarding inequality especially in ‘deep America’. The border-wall is just how Trump has managed to materialize this rhetoric, as his “Build the wall” promise has morphed into the rallying campaign cry “Finish the wall.”

The project is based on a 2017 plan presented by CPB officials to build or replace 1,162 km (722 miles) of fence along the Mexican border, with a total estimated cost of about US$18 billion. At the moment only 179 km (111 miles) have been built or are underway.

Coincidentally, these arms, security, and tech corporate giants are also the biggest campaign contributors to members of the House Appropriations Committee, the congressional body that regulates expenditures of the federal government, or earmarks the money for potential contracts; as well as to members of the strategic House Homeland Security Committee, which handles legislation on border and migration control.

The consolidation of the border-industrial complex, and its deep-rooted ties within the federal government, is topped by an army of lobbyists that sway legislation towards their business.  In total, from 2002 to 2019 there were nearly 20,000 reported lobbying visits related to homeland security.

The last 3 decades have witnessed an unstoppable boom in US border spending and many arms, security, and IT firms have made millions as a result. https://www.tni.org/morethanawall  #morethanawall #DefundHate

“Corporations’ success in winning ever-bigger contracts is not an unexpected bonanza but has been engineered by the same corporations’ growing involvement in U.S. politics,” the report reads.

Yet it’s not just firms that profit from border security. Research centers and universities are large beneficiaries that also help to double-down on rhetoric needed to justify such large expending, through nine Centers of Excellence on Borders, Trade, & Immigration that in 2017 received US$10 million directly, with another US$90 million dedicated to research and development.

“These border-security giants exercise a strong influence on Republican and Democrat politicians in strategic positions in the executive and legislature as well as in key media positions,” Miller affirms in the report.

The document thus concludes that any strategy to change the direction of U.S. policy on migration will require confronting this border–industrial complex and removing its influence over politics and policy.