If you want to talk about carbon sequestration in the vineyards……

Dr. David Johnson, Adjunct Professor for the College of Agriculture at Chico State and Faculty Affiliate for the Center for Regenerative Agriculture, is investigating the use of biological soil enhancements and its effect on carbon sequestration for the Institute of Sustainable Agricultural Research at New Mexico State University. In particular, he found that the ratio between fungi and bacteria in the soil is critical to a plant’s productivity in healthy agricultural systems and thus to a plant’s efficiency in nutrient uptake. It also increases the rate of carbon sequestration significantly.

Crop yields were also dramatically improved. Johnson reports that the cotton he used in his testing grew 6 feet high and produced over five bales of cotton per acre without fertilizers, herbicides or insecticides. The average in his area is about two and a half bales per acre. Australian farmers using similar methods have seen yields of 3 tons of wheat in areas that produced about 1.6 tons previously. 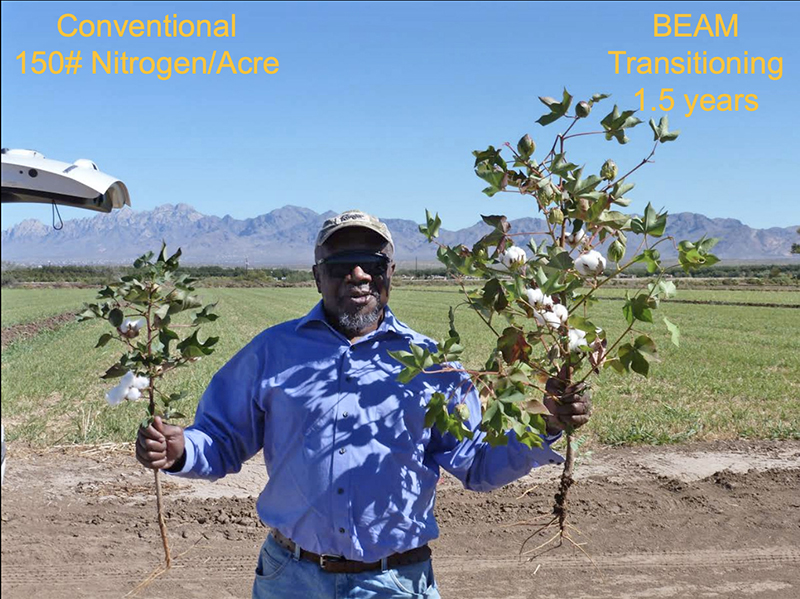 Dr. Johnson believes that this method of regenerating the soils holds the most promise for carbon sequestration tested. Watch Dr. Johnson speak at a seminar at Chico State giving the full background and results of his work.(opens in new window)

Read the documented results of some of his research: “Development of soil microbial communities for promoting sustainability in agriculture and a global carbon fix. (PDF)“

Find more of his research documents(opens in new window).

In the course of his work, Dr. Johnson and his wife, Hui-Chun Su, created a bioreactor for producing the fungal-rich compost used in their experiments. The design improves on most composting systems by allowing the plant material to be composted aerobically without needing to be turned. It reduces water usage up to six times, produces no odors or associated insects, and is inexpensive and relatively simple to make.

The compost created looks different than most compost—more the consistency of clay than mulch. It takes about a year to make but the result is a more biologically diverse and nutrient-rich product that greatly improves the biology and nutrient availability of the soil, improves water-retention capacity, and increases soil carbon sequestration while greatly improving crop yields.

Studies of using BEAM compost in a great variety of climate and soil conditions are underway.  The Regenerative Agriculture Initiative (RAI) at Chico State is participating in these experiments through a grant from the Cal State Agricultural Research Initiative(opens in new window).

The grant will fund a multi-year study on the effects of BEAM compost and compost tea on California rangeland. Additional BEAM studies through RAI are in the works, including those testing the effectiveness of using the compost as an inoculate to coat the seeds before planting.

Here are detailed instructions for building your own bioreactor.