‘Get On the Streets. And Bring Everybody’: Extinction Rebellion Kicks Off Two Weeks of Global Action

“We only get one planet and so we’re here to try and defend it.”

Dutch police arrested Extinction Rebellion (XR) activists during a protest on Oct. 7. For two weeks, members of the movement will gather in major cities across the globe and continue to rebel against the world’s governments for their inaction on the climate and ecological crisis. Activists in Amsterdam organizing a large-scale blockade on the Museumbrug, in front of the Rijksmuseum. (Photo: Ana Fernandez/SOPA Images/LightRocket via Getty Images)

Nearly a year after Extinction Rebellion launched in London, the global movement that uses nonviolent civil disobedience to demand ambitious climate action kicked off two weeks of protests on Monday with demonstrations around the world that blocked major roadways and led to arrests.

“Starting on October 7th, for 2 weeks, Extinction Rebellion is calling an International Rebellion. Together, we will peacefully occupy the centers of power and shut them down until governments act on the climate and ecological emergency,” the XR movement says on its website. “Leave your desk. Invite your boss. Walk out of school. Switch off the TV. Put down your phone. Get on the streets. And bring everybody.” 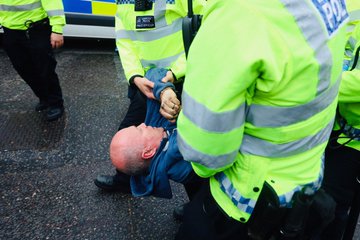 London is just one of 60 global cities where XR members held protests Monday and are planning future actions for International Rebellion, according to the movement’s webpage that sorts upcoming protests by continent. Demonstrators worldwide turned out in droves Monday and are set to continue engaging in peaceful civil disobedience in the coming days across Europe, Asia, Africa, the Americas, and Oceania.

After the London Metropolitan Police on Saturday used a battering ram to raid an XR building in the city and seize items such as disability ramps that organizers had planned to use to make the movement’s demonstrations “accessible and safe for all,” XR activists on Monday blocked traffic across the city’s government district of Westminster.

Reuters reported that at least 135 people were arrested. According to the news agency:

Large crowds of protesters blocked some of Westminster’s largest and busiest roads, bridges and squares, carrying banners with slogans such as “Climate change denies our children a future unless we act now.”

Banging drums and chanting, they took over the tourist hotspot of Trafalgar Square and marched down the Mall, the broad tree-lined avenue that leads to Buckingham Palace.

Some activists glued or chained themselves to cars parked in the middle of roads or to street lamps, making it hard for police officers to detain them.

“We’re here because the government is not doing enough on the climate emergency,” Lizzy Mansfield told Reuters. “We only get one planet and so we’re here to try and defend it.”

XR parked a hearse at Trafalgar Square to mourn mass species extinction and sent a message to the U.K. Parliament that “truth demands action” by hanging a banner on a barge in the River Thames: 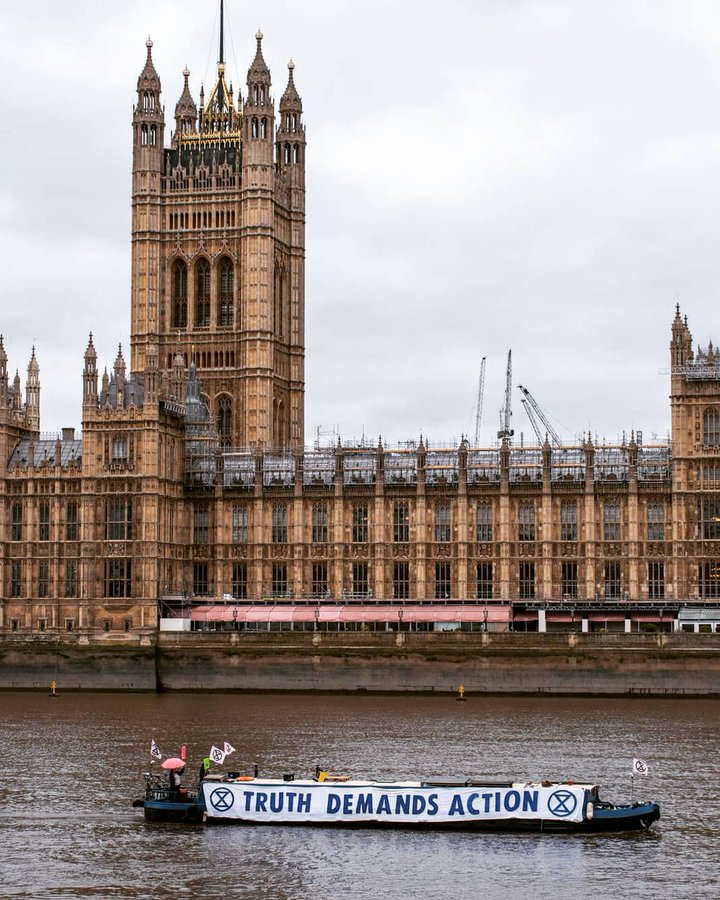 “Meanwhile, activists from Animal Rebellion, a movement allied to Extinction Rebellion, began marching from Russell Square to Smithfield Meat Market on Monday afternoon,” reported BBC News. “Organizers said they plan to stage an overnight occupation of the market to share their ‘vision of a future plant-based food system.'”

From London, Berlin, and Madrid, to Paris, Philadephia, and Toronto, activists, reporters, and supporters shared updates from the streets on social media Monday with the hashtags #InternationalRebellion, #EverybodyNow, and #TheTimesIsNow.

“In Berlin, around 1,000 people blocked the Grosser Stern, a traffic circle in the middle of the German capital’s Tiergarten park dominated by the landmark Victory Column,” according to The Associated Press. “That protest began before dawn.” 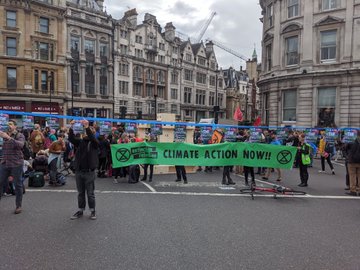 Highlighting protests in other European cities, the AP reported:

In Amsterdam, hundreds of demonstrators blocked a major road outside the Rijksmuseum, one of the city’s most popular tourist attractions, and set up tents. The protest went ahead despite a city ban on activists gathering on the road. The protesters ignored police calls for them to move to a nearby square.

In Spain, a few dozen activists briefly chained themselves to each other and to an elevated road over a major artery in the Madrid, snarling traffic during the morning rush hour. The National Police said 33 activists were taken to their premises and three were arrested for resisting orders by anti-riot officers.

Four teenage girls were among about 30 people who were arrested in Sydney on Monday for attempting to stop vehicle traffic, XR organizers told The Guardian. According to the newspaper, hundreds of people joined a march and rally in Australia’s capital city.

Sisters 10-year-old Luka and 12-year-old Maddie Brett-Hall were among those who marched from Sydney’s Belmore Park to the central business district. Maddie said, “I feel like we need to make a difference.”

Ember Henninger, a 10-year-old who also marched in Sydney on Monday, said that “the government tells us to just be kids … and this makes me feel angry.”

XR’s International Rebellion follows a global week of action bookended by a pair of climate strikes on Sept. 20 and 27, which were inspired by the school strikes launched by Swedish teenager Greta Thunberg and other youth climate activists worldwide. The #ClimateStrike actions coincided with the United Nations Climate Action Summit in New York City.

“As the results of the U.N. summit highlight, we can no longer rely on governments to do what is needed in the face of climate and ecological breakdown,” Extinction Rebellion NYC spokesperson Trellan Smith said in a statement last month. “We have the right and moral obligation to be on the streets telling the truth about this crisis and demanding responses from our government at this critical time.”

FULL STORY WITH PICTURES AND VIDEOS