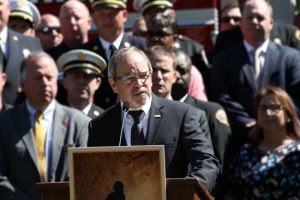 Former Santa Rosa mayor Chris Coursey is campaigning to become the county’s next District Three supervisor in the March 2020 election, replacing Shirlee Zane who has held the seat since 2008. The race is widely seen as a contest between the county’s wine and development-industry interests and champions of environmental values such as climate action and preservation of the coast.

Coursey, 64, was a longtime journalist working for the Press Democrat before his foray into local politics. He was elected to the Santa Rosa City Council in 2014 and his fellow council members voted to make him mayor in 2016, where he earned acclaim for his leadership during the 2017 wildfires. He has lived in Sonoma County nearly 40 years.

Zane, the longest-serving of the five county supervisors, is known for her slogan “Build Baby Build” after the fires. According to campaign finance reports, she’s received maximum amount donations from Sonoma County Alliance, the county’s dominant business coalition; the winery trade association Sonoma Alliance for Vineyards and Environment; and numerous big-name politicians and large winery owners. She is seen as vulnerable for her part in the county’s sale of 82 acres of land (the former Sutter Medical Center) to well-known local developer Bill Gallaher, initiating an uproar by local residents. In addition, although Zane claims to be fighting climate change, she chaired the committee that closed Sonoma Compost at the Central Landfill, resulting in the county’s green waste being hauled to the landfill, placed on the ground, re-loaded to trucks, taken to Vacaville, unloaded and composted there. As to cannabis, a well-known observer states, “she single-handedly turned the pot industry into a corporate haven with the (county’s) rules”.

In contrast, Coursey has had a passion for the outdoors since his early years in which he spent summers at YMCA camp. He was instrumental in educating the public about the Smart Train (Sonoma-Marin Area Rail Transit) and the measure’s prevailing at the ballot box. As a City Council member, he worked on a housing plan that incentivized density, affordability and green building materials. His campaign website notes that climate action, homelessness and housing are among his primary focuses.

In response to the county’s housing crisis, Coursey states our response must be more measured and thoughtful than “build, baby, build” and notes the need to preserve what brought us to Sonoma County in the first place: unique neighborhoods, open space, community separators, and natural resources outside the cities. As to climate action, his website asserts: “Sonoma County should join more than 900 jurisdictions worldwide and declare a climate emergency in recognition of the urgency of addressing climate change”; and “The Board of Supervisors should establish a policy that every action taken by county government will be done only after climate impacts are taken into account, and mitigated to the greatest degree possible”.

In response to the county’s wildfire vulnerability, Coursey has written an open letter to the California Public Utilities Commission calling upon PG&E, “after years of neglect and plush profits, finally upgrade and underground our electric infrastructure throughout the system”.