New calls for rent control in Sonoma County’s tight housing market“Rents soared nearly 50 percent from 2011 to 2016, and have risen to new heights since October, when the North Bay was hit with the most destructive wildfires in state history.”

“In New York City alone, according to the report, Airbnb’s expansion may have raised average rents for city residents by $400 per year. And that’s when someone can find a place to rent at all—or hang on to their existing housing. A March 2015 report by Pasadena public radio station KPCC noted that perhaps as much as 12.5% of the housing in Venice Beach had been converted into short-term rentals. Landlords have also been accused of evicting current tenants in Los Angeles, Phoenix, San Francisco, and New Orleans.” 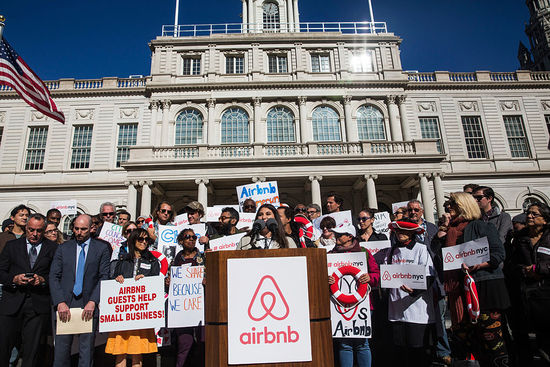 Attribution: Getty Images
Supporters of Airbnb held a rally on the steps of New York City Hall showing support for the company in October 2015 as the New York City Council debated how to regulate the controversial company.
Local, state governments struggle over how to regulate short-term rental nightmare
Oct 30, 2019 9:21am PDT by Dawn R Wolfe, Community

For some people, short-term rental platforms such as Airbnb work like a dream, providing a potentially less expensive way to travel or an opportunity to make a bit of extra money on the side.

That’s the case with Kelly Speth, a graduate student in Ann Arbor, Michigan, who, along with her medical resident husband, rents out the top half of their duplex. “For us it’s like perfect because we’re able to have our friends and family come visit, but we also have some extra income coming in to help pay for our property taxes,” Speth said.

But for many, many others, STRs are a nightmare. Would-be homeowners and renters are priced out of local markets as units meant for long-term housing are turned into unlicensed virtual hotels. Others are losing their homes altogether as landlords convert rental properties into short-term rental cash cows.

Meanwhile, people who thought they were living in single-family neighborhoods are dealing with the noise, trash, and even theft brought in by transient renters looking for a disposable place to stay or a good place to party overnight. Kathleen Hiraga, who also lives in Ann Arbor, is dealing with the negative side of having short-term rentals in her formerly all-single-family residential neighborhood. Hiraga told Daily Kos that the owners of the two houses on her street that have converted their properties to short-term rentals are “flying right in the face” of city regulators, with their renters ignoring everything from noise ordinances to occupancy limits. When Hiraga became an activist, encouraging her town to more strictly regulate STRs, the absentee owners of her street’s two “nightmare” houses served her with a cease-and-desist letter.

Hiraga is far from alone in dealing with more crime in her neighborhood courtesy of short-term rental properties. In 2014, the New York attorney general’s office issued a report on short-term rentals that highlighted examples of thousands of complaints from residents of New York City, including allegations of theft of deliveries, vandalism, and even threats of assault when a resident complained.

Given all of the problems that local governments and residents alike have experienced since the website Vacation Rentals By Owner, now VRBO, was founded in 1995 and Airbnb exploded onto the STR market in 2008, the question is: What’s being done to help people deal with the problems caused by short-term rentals?

The answer is: It depends on where you live.

Members of Michigan’s legislature, for example, have put forth two wildly different bills to address STRs. One bill, sponsored by a Republican state House member who is also a realtor, is a land speculator’s dream. If Rep. Jason Sheppard’s HB 4046 becomes law, Michigan will join states such as Utah and Florida in putting strict limits on, or even banning, local government ordinances regulating short-term rentals.

On the other hand, a bipartisan group of Michigan legislators has introduced legislation that would have the state follow Massachusetts’ example by putting strict limits on short-term rentals and giving local governments leeway to craft STR regulations that best suit their individual communities’ needs.

But while Massachusetts, Utah, and Florida have created legislation to address short-term rentals, most states have been slow to act. An Oct. 25 online search conducted by Daily Kos found that the vast majority of states leave regulating short-term rentals to local governments.

Existing local regulations vary wildly. Some local governments forbid anyone other than onsite owner-operators (like the Speth family) from acting as short-term rental hosts. Others require STR operators to register with city government, limit the number of nights any nonhotel property can be rented out, and levy specific fees to help cover the cost of enforcing regulations.

Regardless of the laws or regulations a state or local government settles on, regulating short-term rentals is a complicated matter. In addition to sometimes having to fight state government for the ability to regulate STRs in the first place, any level of government considering regulations runs into conflicting definitions of a fundamental American ideal: property rights.

“So typically, the way that the Americans think about their property is that they’re the king of the castle and they can kind of do what they want to do with their property. People feel very strongly about that,” Ulrik Binzer, the founder and CEO of Host Compliance, told Daily Kos. Host Compliance, a for-profit company, offers services to help local governments enforce STR regulations and collect taxes from short-term rental proprietors. “The neighbors also have property. And they feel very strongly that they have the right to the quiet enjoyment of their property.”

In addition to the emotions that come into play, the process of enforcing regulations can also be a huge challenge, particularly for smaller local governments. Professor Kellen Zale, a member of the law faculty at the University of Houston, explained that to make and enforce policy, regulators need data, including how many STRs are in their community and who owns and operates them—data that short-term rental platforms fight against providing.

“Unless they are sued and losing a lawsuit, [the platforms] do not want to share that data,” Zale told Daily Kos. Binzer’s company is one of a number of such firms that exist because many municipalities lack the staff to find short-term rentals within their borders and determine who owns them.

Further, said Binzer, traditionally local governments are set up to respond to complaints, but not to proactively keep issues from arising. “When the phone rings, they’ll go and investigate [a complaint] and that works great for overgrown weeds and swimming pools. It does not work really well for the sharing economy, because these properties are generally well-maintained and look fine.”

No matter what a house or apartment that’s been converted into a short-term rental may look like, the fact remains that every unit that’s taken out of the actual housing market and turned into an unlicensed hotel unit puts increasing stress on communities. According to a January report by the Economic Policy Institute that analyzed current studies on the STR phenomenon, “Because housing demand is relatively inelastic (people’s demand for somewhere to live doesn’t decline when prices increase), even small changes in housing supply (like those caused by converting long-term rental properties to Airbnb units) can cause significant price increases.”

In New York City alone, according to the report, Airbnb’s expansion may have raised average rents for city residents by $400 per year. And that’s when someone can find a place to rent at all—or hang on to their existing housing. A March 2015 report by Pasadena public radio station KPCC noted that perhaps as much as 12.5% of the housing in Venice Beach had been converted into short-term rentals. Landlords have also been accused of evicting current tenants in Los Angeles, Phoenix, San Francisco, and New Orleans.

Given all of the issues with short-term rentals, the Economic Policy Institute report concludes that the economic costs they impose “likely outweigh the benefits.”

Dawn Wolfe is a freelance writer and journalist based in Ann Arbor, Michigan. This post was written and reported through our Daily Kos freelance program.

One Thing All Liars Have in Common, Brace YourselfTruthFinder People Search Subscription

How Far Does $1 Million Go in Retirement?Fisher Investments

Play just 1 minute to find out why everyone loves this farm game!Taonga: the tropical farm

At 89, This Is The Car Clint Eastwood DrivesRefinance Gold

Never Give Any of These 3 Ingredients to Your DogDr. Marty’s Freeze-Dried RAW Dog Food, Nature’s Blend

7 Reasons Ladies Are Switching To This PerfumeSkylar

Forget Traditional Hair Dye If You Color Grays — Do This InsteadeSalon

The New 2020 Chevy Lineup Is Here And It Astonishes!2020 Chevy Vehicles | Search Ads

Our $5 Wines Are Better Than Most $50 WinesFirstleaf

Find Local Experts in Sebastopol To Clean Your Gutters This FallHomeAdvisor