“Ribera tweeted in Spanish Tuesday that the government approved the emergency declaration “for justice (between territories, between generations and between people of the same generation), for our future, for responsibility (economic, social, environmental and institutional).”

“Now it’s time to see… if there will really be major changes that take us away from the catastrophic path we find ourselves on.” 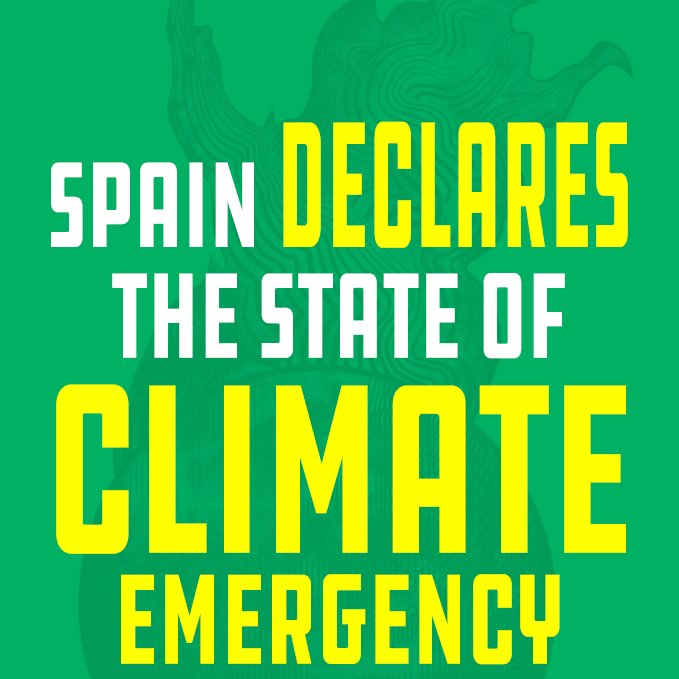 Activists with Extinction Rebellion urge governments across the globle to declare a climate emergency and act on with input from citizens. (Photo: XR Madrid/Twitter)

Spain’s new left-wing coalition government on Tuesday declared a climate emergency and promised to send ambitious legislation to the country’s parliament within the next 100 days—moves that were welcomed by campaigners who responded with calls for “concrete and immediate” action plans.

The declaration also came less than a week after Barcelona declared a climate emergency and unveiled 103 measures that are collectively crafted to help Spain’s second-largest city halve its greenhouse gas emissions by 2030. As Barcelona Mayor Ada Colau put it, “This is not a drill, the house is on fire.”

Colau’s comment echoed those of activists worldwide pressuring all levels of government to pursue bold policies that cut emissions and combat the climate crisis. While campaigners across Spain celebrated their government’s declaration, they also vowed to keep fighting for action on par with what scientists say is necessary in a rapidly warming world.

In the Spanish city Huesca, a branch of the global youth climate strike movement Fridays for Future—founded by Swedish teenager Greta Thunberg—was among the groups demanding that the nation’s government follow the declaration with urgent action.

“Now it’s time to see… if there will really be major changes that take us away from the catastrophic path we find ourselves on,” declared Extinction Rebellion (XR) Spain.

The global XR account responded to the declaration by tweeting that “we want governments to act together and start solving this #PlanetaryEmergency NOW. #DeedsNotWords #BeyondPolitics.”

The Madrid-based Spanish-language newspaper El País reported Tuesday that Teresa Ribera, vice president for the ecological transition, announced that the government will establish a citizens assembly, following in the footsteps of France.

Ribera tweeted in Spanish Tuesday that the government approved the emergency declaration “for justice (between territories, between generations and between people of the same generation), for our future, for responsibility (economic, social, environmental and institutional).”

The government’s climate legislation will “include mandatory low-emission zones in big cities” like those that “are already in effect in Barcelona and Madrid, as well as dozens of cities around the globe,” Reuters reported Tuesday.

Speaking after a cabinet meeting of the new government, environmental minister Teresa Ribera said a bill will oblige all urban areas with a population of more than 50,000 to create low-emission zones.

The left-wing coalition also said it would introduce legislation to bring down emissions and achieve “climate neutrality” by 2050.

Although “the ambitious target is likely to put the coalition government on a collision course with the far-right Vox party,” Reuters noted, it aligns with efforts pursued by other governments and the European Parliament, which declared a climate emergency in November 2019.