“An unprecedented coalition of U.S. states, cities, businesses, communities of faith, universities, health care and cultural institutions, and other organizations are now acting to fulfill America’s climate pledge to the world. This commitment is reflected in the large number of American actors continuing to back the Paris Agreement, including members of the We Are Still In network, U.S. Climate Alliance, Climate Mayors, We Mean Business, and many others.”

Cities, counties, and states commit to 100% renewables, which ought to be our national goal 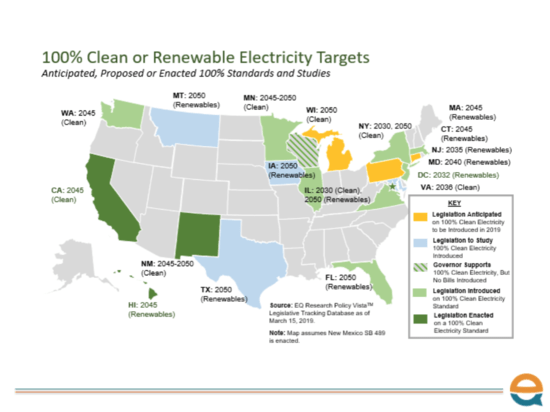 While climate hawks say that 2050 is not soon enough, a few years ago scarcely anyone outside a few activists and think tanks were talking about 100% renewables, much less a time table for achieving that goal. Momentum is accelerating….

The failure of the COP25 summit in Madrid is a message to climate hawks that the encouraging growth in activism we’ve seen in the past few years, especially from young people, will have to be cranked up several more notches if there is to be any chance of ameliorating the impacts emerging across the planet from continuing to pump ever more greenhouse gas emissions into our overburdened atmosphere. As Matt Maynard writes at Geographical:

The promise-later, act-later Paris Agreement was updated to a promise-now, act-later agreement Green Deal across the continent. Embodied in that European promise by some of the world’s richest countries (and those most historically responsible for creating warming) was an understanding that 3˚C of global warming was now the best humanity could hope for.

That’s twice the rise of 1.5 degrees Celsius (2.7 degrees Fahrenheit) that scientists believe should be the ceiling if we are to avoid some of the more severe impacts of the climate crisis. It’s half again as much as the limit of 2 degrees C (3.6 degrees F) that the Paris agreement signatories accepted as the goal. Next year, the

United States will withdraw from the agreement unless Donald Trump is voted out of the White House and replaced by someone who views what is underway as a climate emergency. That new president will need to undertake much cajoling and arm-twisting to convince Congress and encourage leaders across the world to take serious, immediate steps with a near-term carbon neutrality deadline. Otherwise, we’ll just keep careening down the fossil fuel superhighway to that 3-degree (or worse) catastrophe.

While the signatories to the Paris agreement are supposed to arrive at COP26 in Glasgow next year with upgraded pledges of emission cuts, almost none of them is on a trajectory to fulfill their existing pledges, which everyone agrees aren’t nearly strong enough.

Depressing as this is, there are glimmers of hope. Focusing activism on local leaders, climate hawks can ratchet those glimmers into beacons. That sometimes will mean being “in the streets” to put the pressure on and also mean getting out the vote to elect the right people to office. The right people are neither climate science deniers nor climate policy delayers. The right people like these:

An unprecedented coalition of U.S. states, cities, businesses, communities of faith, universities, health care and cultural institutions, and other organizations are now acting to fulfill America’s climate pledge to the world. This commitment is reflected in the large number of American actors continuing to back the Paris Agreement, including members of the We Are Still In network, U.S. Climate Alliance, Climate Mayors, We Mean Business, and many others.

Around the world, including the United States, scores of cities and counties and a few states and provinces have adopted goals or mandates to get to carbon neutrality via clean energy—100% renewables or renewables plus nuclear. Not long ago, the attitude was that 100% renewables is a technically and economically impossible goal. Some critics who are climate science deniers still hold to this view. These days, however, it’s the deadlines that are most at issue. While naysayers argue that it’s just not possible to achieve the 100% goal within 25 to 30 years, many climate activists and scientists alike say that a 2045-50 deadline doesn’t get us there soon enough.

Cities and states obviously cannot meet the Paris goal by themselves. National and international policies are essential. But these non-national entities will not only be taking action that makes a difference on their home turf, they will by example also be demonstrating to other communities what to do. The group Climate Mayors now boasts 435 city leaders. The Sierra Club notes that one in four Americans already lives in a community officially committed to 100% renewables, or renewables plus nuclear. By its count, 153 cities, 13 counties, and nine states have made such commitments, with six of those cities already running on 100% renewables.

Some of the growing enthusiasm at the local level has emerged as a consequence of the House resolution on the Green New Deal supported by the Sunrise Movement that was introduced by New York Rep. Alexandria Ocasio-Cortez and Massachusetts Sen. Ed Markey 10 months ago. Most cities and states have taken a narrow approach, focusing entirely on electricity generation. But a few are including provisions like those in the GND to ensure environmental justice and create jobs.

One of the cities, Santa Fe, New Mexico, committed to 100% renewables in 2017. Like the federal Green New Deal, the city’s approach is broader than just a switch to renewables. Speaking of carbon neutrality, Mayor Alan Webber told E.R Crunden at Think Progress earlier this year, “We tend to think of policies in silos but people don’t live in silos, they live their lives […] There’s a renewable energy piece, a transportation piece, a land-use planning piece, a social equity piece, a jobs and inclusivity piece”:

Santa Fe is part of a larger story unfolding in New Mexico. On March 22, Gov. Michelle Lujan Grisham (D) signed the Energy Transition Act, which would require the state’s electricity grid to be completely carbon-free by 2045. It also earmarks funds for communities impacted by the transition away from fossil fuels, including coal workers. […]

Efforts in New Mexico are nonetheless notable in the components they bring together. Namely, they go beyond advocating for a shift away from fossil fuels, and also work to grow jobs and protect impacted communities. That’s language that has made the Green New Deal resolution so popular for some and so divisive for others. But such small-scale efforts will also be a test of whether a bigger and bolder endeavor might succeed.

Catherine Morehouse at Utility Dive recently scrutinized the policies of four small American cities in Texas, Missouri, Colorado, and Kansas that already run on 100% renewables. That includes Greensburg, the Kansas city that was 95% wiped out by a two mile-wide tornado in 2007 and emphasizes the green in its name while rebuilding, with all its electricity coming from the windiness that destroyed the place and is now captured by turbines that produce a surplus of power that Greenburg exports to others.

Every city should be on board with such efforts. Activists should give nudges to the 300 or so mayors of the 432 Climate Mayors who serve in cities that have not yet adopted 100% renewables goals. These cities, and the states they are part of, cannot replace the national commitment to the Paris agreement. But they can still move us in the right direction while we work putting into office national leaders who aren’t scientific illiterates or bought and paid for by fossil fuel interests. In other words, we need to elect climate hawks and climate owls at the highest levels.