“Our government won’t move on climate so we have to move our money. The fossil fuel industry can’t survive without its friends on Wall Street,” Vondrich said. “Without loans, insurance and investment, Big Oil dries up. Money talks, and we can walk. Wall Street caused the financial crash. We won’t let it cause the climate crash.”

“Money is the only language that the fossil fuel industry speaks.”
—Ka Hswa Wa, EarthRights International

Organized by a coalition of climate, youth, and Indigenous groups, Stop the Money Pipeline will officially launch Friday at the final event in a weekly civil disobedience series that actor and activist Jane Fonda kicked off in October called Fire Drill Fridays.

Like previous weeks, before the Friday rally and protest there will be a Thursday night livestreamed teach-in, which will feature Deranger, Leonard, and McKibben. 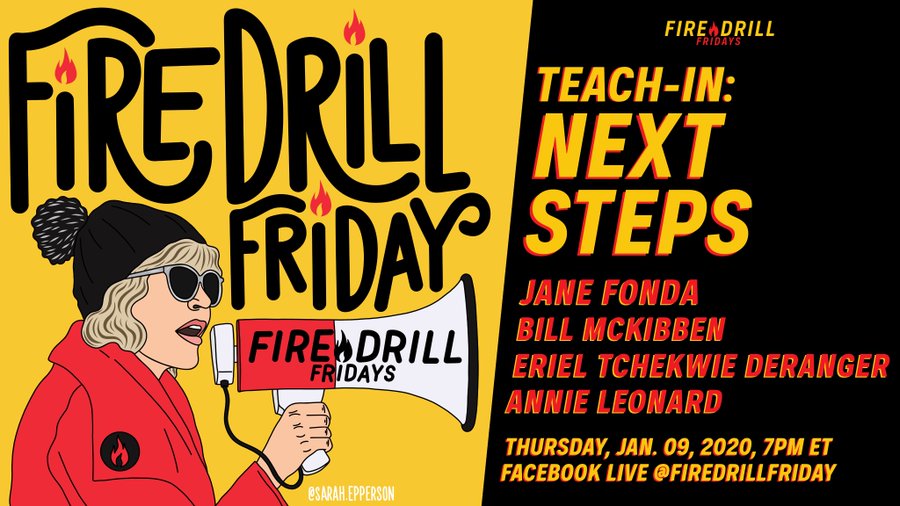 “A chorus of high profile voices—including scientists, the United Nations, European central banks, and the IMF—have all sounded the alarm about the role of the finance industry in driving climate destruction, but so far their calls for action have fallen on deaf ears,” the statement said. “The Stop the Money Pipeline mobilization will bring together a number of existing campaigns targeting the worst offenders in each part of the financial sector.”

“We cannot solve the climate crisis until banks and insurance companies step up and stop financing environmental destruction.”
—Liz Butler, Friends of the Earth U.S.

Liz Butler, vice president of organizing and strategic alliances at Friends of the Earth U.S., explained that “climate chaos is already decimating the world, from worsening wildfires to widespread flooding and devastating droughts. Wall Street banks and insurance companies are fueling this crisis by pumping billions of dollars into fossil fuel projects that destroy local communities and our environment.”

“We cannot solve the climate crisis until banks and insurance companies step up and stop financing environmental destruction. They must slash their financing for fossil fuel projects and end the abuses of frontline communities worldwide,” Butler added.

“With Australia burning and Jakarta underwater, the science is clear that every new investment in fossil fuels is committing the world to climate chaos and human rights violations on a massive scale,” he said. “Fossil fuel producers are already being held accountable in courtrooms around the world. The financial sector should take note, take action or take cover.”

“As the world’s largest investor in fossil fuel companies, BlackRock is effectively financing disinformation campaigns that have delayed climate action for decades,” declared Kathy Mulvey, a campaign director at the Union of Concerned Scientists. “Investors need to expect more and tolerate less from fossil fuel companies—and tell them to swiftly get on board with climate action, or get out of the way.”

BlackRock announced Thursday that it is joining the Climate Action 100+ investor initiative. Members of the BlackRock’s Big Problem network responded by calling the move a “first step in the right direction” and urging the firm to “go beyond words and actually make meaningful changes to the way it wields its power.”

According to the tenth annual Fossil Fuel Finance Report Card, released in March 2019 by RAN and other groups, 33 global banks have collectively poured at least $1.9 trillion into the fossil fuel industry since world leaders adopted the Paris climate agreement in December 2015. The report card identified Chase as the bank that gave the most to coal, gas, and oil companies from 2016 to 2018.

“Our government won’t move on climate so we have to move our money. The fossil fuel industry can’t survive without its friends on Wall Street.”
—Clara Vondrich,
Divest-Invest

“Banks around the globe are betting against our future with every dollar they invest in fossil fuels,” Greenpeace USA climate campaign director Janet Redman said Thursday. “Money is the oxygen on which the climate crisis burns—and we need everyone to care where their money is being spent.”

As EarthRights International executive director Ka Hswa Wa put it: “Money is the only language that the fossil fuel industry speaks. For decades, the industry’s game has been to pursue profit recklessly while shifting the costs onto local communities. Today, we have come together to announce that the rules of the game have changed and fossil fuel companies will be held accountable.”

Organizers see Stop the Money Pipeline as the next phase of the global movement fighting for divestment from fossil fuels and investment in renewable energy, which has secured commitments from over 1,150 institutions with more than $12 trillion in total assets, according to a real-time tracker from 350.org’s Fossil Free project.

“The international movement calling for divestment from dirty fossil fuels is only growing louder and stronger, and major financial institutions should take note,” said Lena Moffitt, senior director of the Sierra Club’s Our Wild America campaign. “It’s time for them to stop pouring money into the projects that are driving the climate crisis and commit to investing in a future that benefits our communities, our economies, our health, and our planet.”

Divest-Invest director Clara Vondrich emphasized the added importance of pressuring major financial players to take action to address the climate emergency given that global governments continue to drag their feet.

“Our government won’t move on climate so we have to move our money. The fossil fuel industry can’t survive without its friends on Wall Street,” Vondrich said. “Without loans, insurance and investment, Big Oil dries up. Money talks, and we can walk. Wall Street caused the financial crash. We won’t let it cause the climate crash.”