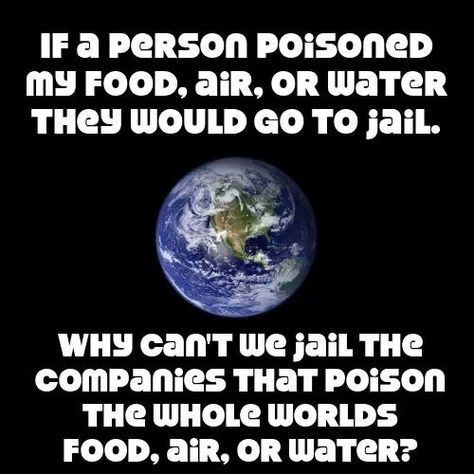 “The Environmental Protection Agency (EPA) has sided with Monsanto and Bayer in saying there is no evidence to support claims that glyphosate-based herbicides can cause cancer.

US Right to Know Reports:

Monsanto loses effort to head off St. Louis trial that starts next week

Monsanto’s German owner Bayer AG has failed in efforts to head off a Missouri trial over claims brought by cancer patients that Monsanto’s herbicide caused their diseases and Monsanto hid the risks.

In a ruling handed down Wednesday, St. Louis City Judge Elizabeth Byrne Hogan of Missouri’s 22nd Circuit ruled that the company wasn’t entitled to summary judgment in the case of Wade v. Monsanto, which is scheduled to go to trial Tuesday.

Hogan further frustrated Monsanto by ordering Thursday that the trial could be audio and video recorded and broadcast to the public. Lawyers for Monsanto had argued that the trial should not be broadcast because the publicity could endanger witnesses and former Monsanto executives.

Judge Hogan ruled that the trial would be open to audio and video recording and broadcast from its beginning on Jan 21 through the end of the trial, with several exceptions, including no coverage of jury selection.

The trial will be the first to take place in St. Louis, the former hometown for Monsanto before the company was acquired by Bayer in June 2018.

Monsanto lost the first three trials that have so far taken place. In those three trials, a total of four plaintiffs claimed exposure to the company’s glyphosate-based herbicides caused them each to develop types of non-Hodgkin lymphoma and that Monsanto covered up evidence of the risks.

Representatives for both sides have been working with a court-appointed mediator since last May to try to resolve the litigation. As settlement talks have progressed, Bayer has successfully negotiated arrangements with certain plaintiffs’ law firms to postpone and/or cancel several trials, including one that had been set to get underway in the St. Louis area the last week of January. Among the cases pulled from the trial schedule are two cases involving cancer-stricken children and a case involving a woman who has suffered extensive debilitation from her bout with non-Hodgkin lymphoma.

But while other firms pull back from trial plans, the Virginia-based Miller Firm, which is the lead counsel for the group of plaintiffs in the Wade case, has pushed forward. The Miller Firm already has two trial victories under its belt, having represented the first trial plaintiff, Dewayne “Lee” Johnson, and the most recent trial plaintiffs, Alva and Alberta Pilliod. The other trial that has thus far taken place, on claims brought by Edwin Hardeman, was handled by two separate firms.

In addition to the Wade case, the Miller firm has another trial due to start in California that will overlap with the Wade case if both proceed as planned.

In ruling against Monsanto’s bid for summary judgment, Judge Hogan shot down an assortment of arguments asserted by the company’s lawyers, including Monsanto’s repeated effort to claim that because the Environmental Protection Agency (EPA) concludes glyphosate is not carcinogenic, a federal legal  preemption exists.

“Defendant has not cited a single case that holds that the EPA’s regulatory scheme preempts claims such as Plaintiffs’,” Judge Hogan said in her ruling. “Every court presented with this issue has rejected it.”

With respect to the company’s argument that a jury should not be entitled to consider punitive damages, the judge said that would be a matter for consideration after seeing evidence presented at trial. She wrote: “Defendant argues that because Roundup has been consistently approved by the EPA and other regulatory agencies, its conduct cannot be considered willful, wanton or reckless as a matter of law. Plaintiffs respond that they will present evidence of Monsanto’s reckless disregard for the safety of others, and despicable and vile conduct, which has been held sufficient to submit the claim of punitive damages to the jury in other cases that have been tried. Defendant is not entitled to summary judgment on punitive damages.”

Anticipation is building around the belief that there could soon be an announcement of at least a partial settlement of U.S. lawsuits pitting thousands of U.S. cancer patients against Monsanto Co. over allegations the company hid the health risks of its Roundup herbicides.

Investors in Bayer AG, the German company that bought Monsanto in 2018,  are keeping a close eye on the status of three trials currently still on the docket to get underway this month. Six trials were initially set to take place in January, but three have recently been “postponed.” Sources say the postponements are part of the process of obtaining an overall settlement with several plaintiffs’ attorneys who have large numbers of cases pending.

A hearing scheduled for today in the Caballero case was called off, but another hearing is set for Thursday before the trial gets underway Friday, according to court filings. Possibly underscoring the fluidity of the situation, at least one of the key witnesses expected to testify in the case has been told he will not likely be needed, according to a source close to the litigation.

In St. Louis, Monsanto’s former hometown, the court calendar calls for the Wade trial to get underway in front of Judge Elizabeth Byrne Hogan a week from today, said court spokesman Thom Gross.

Plaintiffs’ attorney Mike Miller, who represents plaintiff Kathleen Caballero as well as multiple plaintiffs in the Wade trial, said he was looking forward to the trials for these “victims of Monsanto’s deceit.” Miller said rumors that his trials would be postponed are false and he fully intends for the trials to go forward.

Miller and other attorneys involved in the litigation have declined to answer questions about a potential settlement.

But analysts who follow Bayer say that settlement discussions are looking at a potential deal for $8 billion to settle current cases with $2 billion set aside for future needs.

After losing three out of three trials and facing thousands of claims by cancer victims who allege their diseases were caused by exposure to Monsanto’s glyphosate-based herbicides, Monsanto’s German owner Bayer AG has been working for months to avoid any additional trials. Bayer was successful in delaying several trials slated for late 2019 and the three that were planned for January before being postponed. Two of those cases involved children stricken with non-Hodgkin lymphoma and the third was brought by a woman suffering from non-Hodgkin lymphoma.

There are many complicating factors hindering resolution of the litigation, including the fact that plaintiffs’ attorneys with no connection to the plaintiffs’ leadership team continue to advertise for new clients to add to the pool, thus potentially thinning the payouts for plaintiffs who have been awaiting their day in court for years.

In working toward a settlement Bayer is hoping to appease investors unhappy with the mass tort liability Bayer took on in acquiring Monsanto, and hopes to avoid more publicity surrounding damning evidence that was introduced during the previous trials indicating that Monsanto knew of the cancer risks of its weed killing products but failed to warn consumers. The revelations have triggered outrage around the world and prompted moves to ban the glyphosate-based herbicides.

Earlier this month the town of Dennis, Massachusetts announced it will no longer allow use of the herbicide glyphosate on town-owned property. It is one of a number of communities in the Cape Cod area that have recently said they will restrict or ban glyphosate herbicides use. Numerous other cities and school districts around the United States have said they are looking at, or have already decided to,  ban or restrict the use of glyphosate-based herbicides.

The Environmental Protection Agency (EPA) has sided with Monsanto and Bayer in saying there is no evidence to support claims that glyphosate-based herbicides can cause cancer.