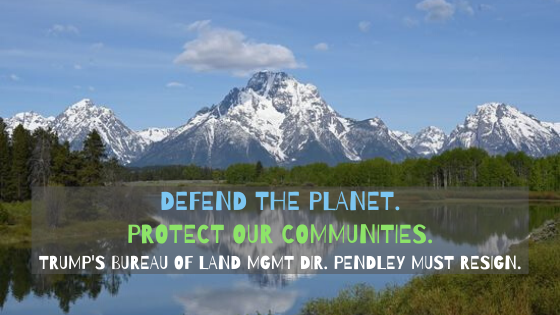 Natural spaces, and consequently our communities, are under attack. And with the Bureau of Land Management’s Acting Director William Pendley working in lock-step with Trump and the white nationalist agenda, it’s only getting worse.

The Bureau of Land Management is responsible for maintaining federal lands and resources for everyone’s benefit across the country.

Yet, there’s more. Pendley recently served as counsel to San Juan, Kane, and Garfield Counties in Utah, defending reduction in lands and protections for the Bears Ears and Grand Staircase-Escalante National Monuments. Furthermore, instead of advocating to combat oil drilling attempts on public lands or prioritizing addressing climate change’s effects on public lands, he has focused on going after wild horses. And since taking office, Pendley has had a whopping 57 conflicts of interest. As the Acting Bureau of Land Management Director, he is responsible for protecting public lands, not assisting attacks against them.

Climate change is one of the gravest threats federal lands and communities across the country face. The Bureau of Land Management should be headed by a qualified public servant who will focus on protecting the natural world. Pendley is one of many Trump appointees whose beliefs are antithetical to a life of public stewardship of the environment and all communities in the U.S. And environmental advocacy organizations and their supporters are taking a strong stance against Pendley’s current appointment.

We must join the coalition of over 90 organizations who submitted an open letter calling for his removal or resignation from the Bureau of Land Management. We must shine a light on his grave misdeeds.

Sign the petition: Demand Acting Director William Pendley resign or be removed from heading the Bureau of Land Management.

Climate change is one of the gravest threats federal lands and communities across the country face. The Bureau of Land Management should be headed by a qualified public servant who will focus on protecting the natural world. Instead, the agency is being led by a staunch climate opponent who espouses white nationalist beliefs. I, along with over 90 organizations and their supporters nationwide, call on you to remove Bureau of Land Management Acting Director William Pendley from the agency.