When will Sonoma County get a modern, science based Tree Ordinance? We’ve been asking for years as the wineries bulldoze oak woodlands for more grapes in time of drought and wine glut.

“Forestry and wildfires drove tree cover loss in the northern hemisphere. Wildfires, including the massive fires in California, were associated with over 5.2 million hectares of tree cover loss between 2016 and 2018 in North America.”

Across the globe, tree cover loss hit record highs from 2016-2018, with roughly the size of a soccer field lost each second. In 2018 alone, the area of tree cover loss was larger than the UK.

Using high-resolution Google Earth imagery, researchers measured global forest loss from 2001-2015 and categorized its causes. These results, published in Science in 2018, were recently updated by the World Resources Institute (WRI) and The Sustainability Consortium on the Global Forest Watch website to include information for 2016 through 2018.

The new data reveals global tree cover loss reached an all-time high in 2016 and 2017, with the drivers of loss relatively unchanged from previous years.  Worldwide, the primary culprit continued to be agriculture. 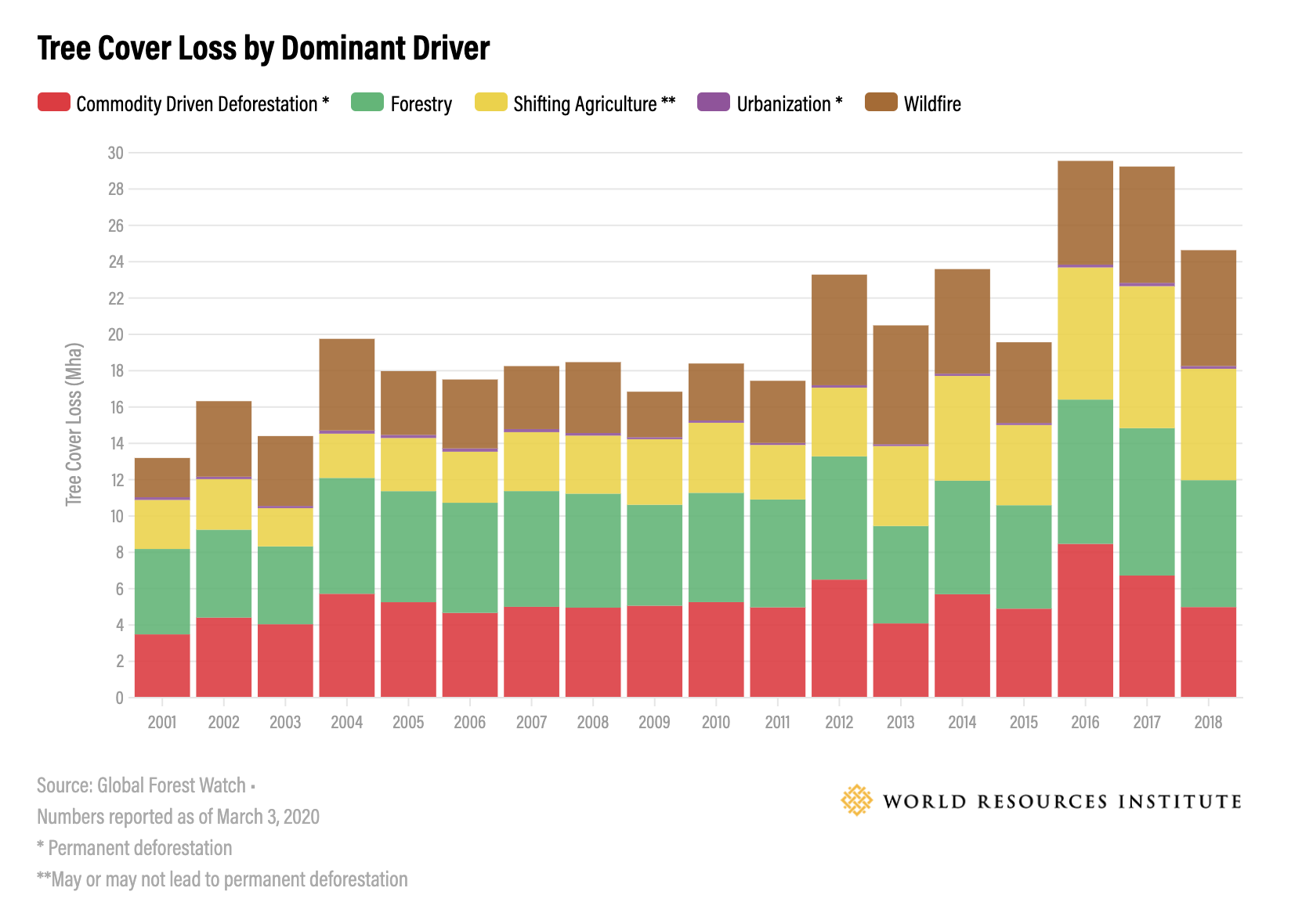 “The updated data show that for most of the world, the dominant drivers of tree cover loss have remained relatively unchanged since our original 2001-2015 analysis,” said Nancy Harris, an author of the original study and Research Director of the Forest Program at WRI to Mongabay. “To me, this signifies we’ve made very little headway addressing the major culprits, like commodity production, that are driving loss at such a massive scale.”

Forestry and wildfires drove tree cover loss in the northern hemisphere. Wildfires, including the massive fires in California, were associated with over 5.2 million hectares of tree cover loss between 2016 and 2018 in North America.

“While the model still can’t distinguish between true wildfires and those set as prescribed burns,” Harris said, “the ever-growing classification of wildfire as a driver of tree cover loss signals that the effects of climate change are changing fire regimes around the world.” 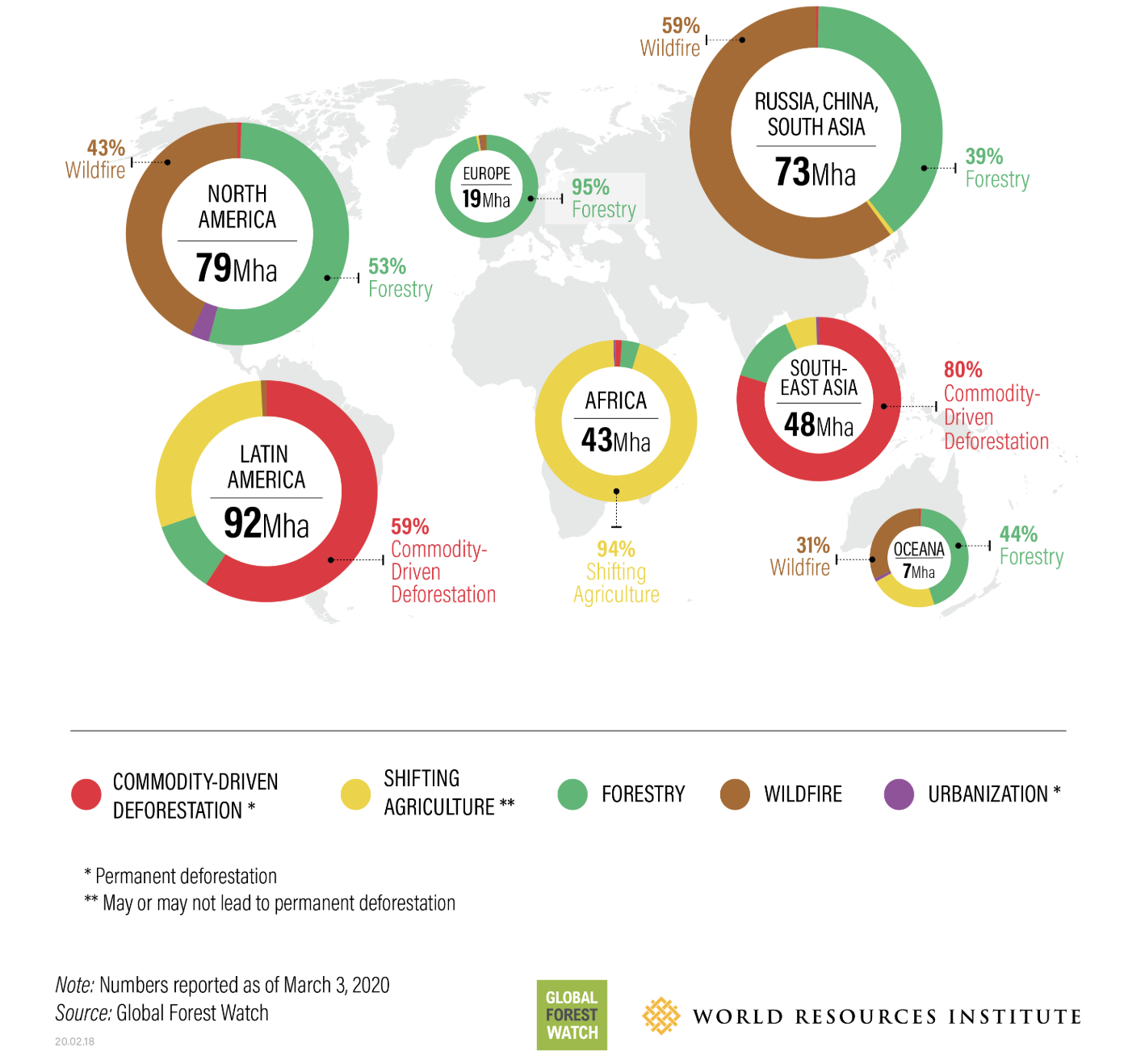 In the tropics, almost half of total loss was driven by agricultural activities such as deforestation for oil palm plantations, cattle grazing, and other commercial commodities, as well as the expansion of small-scale farming.

“We want these results to keep the attention on regions undergoing recent deforestation and see action to stop the continued conversion of forests to agriculture,” said  Christy Melhart Slay, director of technical alignment for The Sustainability Consortium.

Columbia saw a dramatic deforestation spike in 2018, with massive areas cleared for livestock ranching to produce beef. Expanding small-scale agriculture and commodity-driven deforestation pushed into primary forests, with over 200,000 hectares (almost 500,000 acres) lost in 2018. Nearly three-quarters of this was primary forest.

“The last three years of data helped to confirm recent reports about what’s happening to the new forest frontiers that are now open for development following the end of the FARC occupation,” said Harris. “The 2016-2018 drivers analysis shows us that the loss is indeed being driven by deforestation for commodity production, including illegal land grabbing for pastureland to raise cattle.”

Thailand also saw increased forest loss driven by intensification of agriculture in the northern regions. For instance, around Chiang Mai, more traditional methods of subsistence farming with diverse crops are being replaced by larger-scale commodity production such as growing corn for cattle feed.

“In the coming years we will be watching closing to see if this trend plays out in other locations, like Western Africa,” Harris said.

Though some of the fine-scale trends are not captured by this data and some known drivers of tree cover loss (such as natural disasters) are not accounted for, this type of research provides a broad look at deforestation and its causes across the globe.

“Essentially, we need to ask ourselves, are the billions of dollars being spent on zero deforestation efforts going to the right places at the right time to prevent new fronts from opening up?”

Demand for several key commodities—palm oil, soybeans, leather, beef, timber, and pulp and paper — drives deforestation worldwide. A slew of major companies committed to ending deforestation connected to these commodity supply chains by 2020 after the Consumer Goods Forum in 2010 and in the New York Declaration on Forests in 2014. However, most of these companies are set to miss their own deadlines.

The Sustainability Consortium, according to Slay, plans to track the sustainability performance of products to incorporate “more rigorous methods of identifying leadership and calling out corporate laggards across all environmental and social issues including deforestation.”

Banner image of deforestation in West Kalimantan by Rhett A. Butler.

Liz Kimbrough is a staff writer for Mongabay. Find her on Twitter @lizkimbrough.

FEEDBACK: Use this form to send a message to the author of this post. If you want to post a public comment, you can do that at the bottom of the page.