It is important to know what is in our wine. We are reposting in case you missed it the first time. Thanks to Pam and her hard work…and for sharing. Has anything changed since this was written?

Here is an eye opening assessment report on the winegrowers ‘sustainability’ meeting by Pam Strayer, a leading specialist on organic and bio-dynamic wines.

Sonoma Winegrowers is trying hard to sound like it’s green, announcing for the third year in a row that it intends to be the first county in the U.S. to be certified sustainable. This year it says 60 percent – or 34,000 acres (out of 58,000) – of vineyard acreage in the county is now “certified sustainable.”

What impact is that having on farming practices? On the vineyards?

I think it’s a fair question to ask Sonoma’s sustainability program leadership if they will – adhering to their stated goals of being “socially responsible” and “environmentally conscientious” – be reducing the amount of toxic chemicals applied to vineyards in the county as part of their program.

Today, Sonoma’s growers use quite a few toxic substances for growing wine grapes. Sonoma is far less organic than its neighbors to the north (Mendocino, which is 24% organic) and to the east (Napa, where 7 percent of vines are certified organic). Fewer than 3 percent of Sonoma vines are eco-certified (by a legal standard) – organic or Biodynamic.

If you truly wanted to represent yourself as green, why wouldn’t the Sonoma Winegrowers also promote organic certification as a goal for its members?

Sustainability – What’s in a Name?

While everyone can appreciate efforts by wineries to use natural resources and energy more efficiently – and we do – too often sustainability is more visible in marketing programs than in the vines.

Wineries don’t really educate consumers on what sustainability really means. They are happy to provide information about using less water or energy, or their cover crops or bird boxes, but overall they leave the impression that they’re a lot greener than they are. Once when I was writing an article and interviewing retail clerks in wine stores, I asked a wine store clerk in Chicago what sustainable meant. Like a lot of people, he told me it was “like organic or something.”
He’s not alone. New 2015 data from Wine Intelligence, presented at the Oregon Vineyard Supply grower event in Jan. shows that 43 percent of consumers think “certified sustainable” wine means “organic grapes.”

In fact, one prominent winemaker once told me that he thought that the sustainability certification movement was built from the success of the organic movement. It’s an interesting thought, even though in wines, the organic people don’t talk very much about being organic in their marketing. (Yet another paradox.)

But what kind of pesticide requirements do “certified sustainable” wineries and growers have to comply with that others don’t?
Most of Sonoma’s winegrowers are using the Wine Institute’s California Sustainable Winegrowing Alliance as their sustainability certifier. This program has no requirements over and above the legal restrictions placed on any farmer (by local, state and federal law) for reducing the use of toxic substances. Nor does the Fish Friendly Faming program, which is a worthy program that helps wineries pro-actively comply with legal requirements (so there’s no surprises when it comes to enforcement). But Fish Friendly Farming (also called Napa Green in Napa County) doesn’t go beyond what the law requires.

State and federal laws – that apply to all farmers – include some limitations on pesticides in water discharges, based on protecting fish and groundwater, and on maximum pesticide residue levels on fruits and vegetables.

So how well do the “certified sustainable” folks in Sonoma stack up on issues like pesticide use?

The most surprising thing I discovered when I tallied up the chemicals of concern used on Sonoma’s vines was that Sonoma is the highest user – by far – of an old school, very toxic fungicide called Mancozeb, little used in the rest of the state.

Since 2004, Mancozeb’s use in wine grape vineyards has dropped 50 percent.

Yet Sonoma growers account for full two thirds of the total Mancozeb used today on California wine grapes, applying 8,148 pounds on 5,246 acres in the county. Why?

Note: These three wineries on the list of the top 5 are all “certified sustainable” by the California Sustainable Winegrowing Alliance.

Almost all of the applications take place in April.

Sonoma County – Pesticide Stats and Maps
Let’s take a quick tour of Sonoma County’s pesticide use, using the data from the mandatory Pesticide Use Reports, statistics that each farmer is required to file with the state of California’s Department of Pesticide Regulation (DPR).
In addition we will take a look at maps developed by the California Dept. of Public Health that map the DPR data to maps, in the California Environmental Health Tracking Program Agricultural Pesticide Use maps.
Stats – DPR
You can read the list of all pesticides used by crop in Sonoma County online here.
This page will show you each crop and the chemicals used on that crop.

Scroll down the page until you come to “Grape, Wine.” You’ll then see a list of chemical names on the left and other data on the right.

The accompanying maps show “summed pounds” for each area and represent only the chemicals used on wine grapes.

I’m listing these first in text so you can see an overview, and then again, in a second section below that, with both with text and maps. (Apologies for some formatting weirdness in the maps section – although I have used the same font and formatting, Google’s Blogger platform applies some odd spacing.) 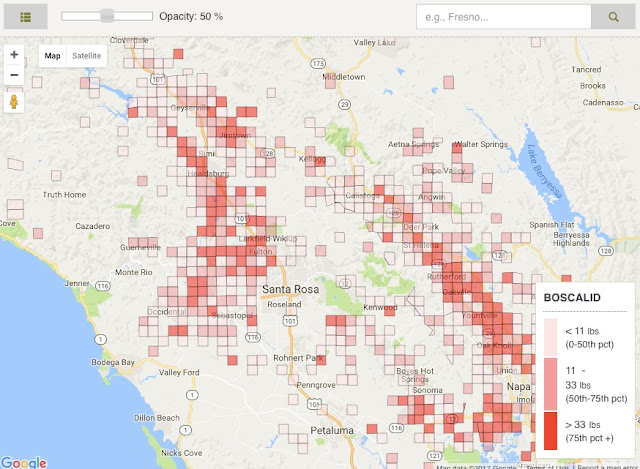 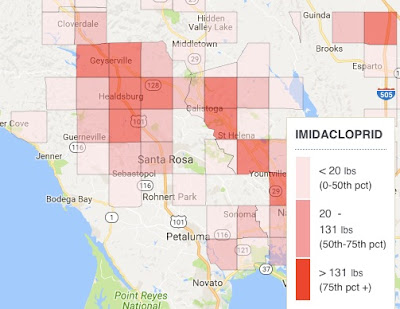 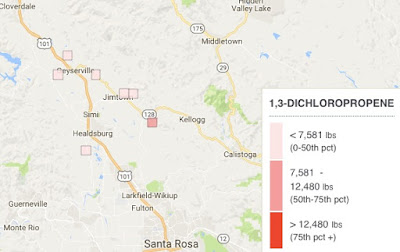 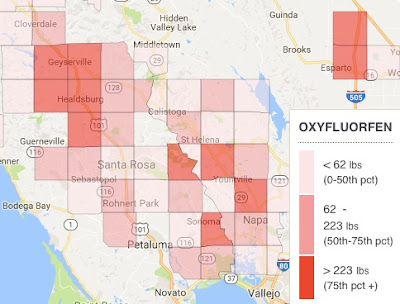 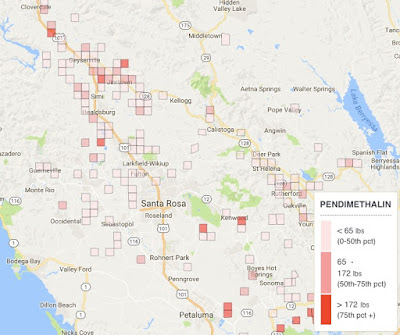 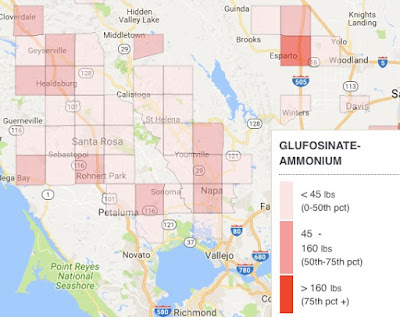 ADDITIONAL CHEMICALS OF CONCERN
Glyphosate – probable carcinogen (according to UN’s IARC, California EPA-2015
[until Monsanto sued them])
76,975 pounds on 47,123 acres
OTHER GROUPINGS
In addition, the pesticide map also displays groups of chemicals – carcinogens, developmental and reproductive toxins and more.
Here are some of the maps showing chemicals of concern in Sonoma applied to wine grapes.
Carcinogens
Toxins deemed by the EPA to be carcinogenic
Neonicotinoids
Bird and bee toxins (currently banned in Europe)
Sustainability – What’s Real and What’s Not
We do owe thanks to the sustainable growers and wineries who go the extra mile to save water and energy and run more efficient operations that waste less.
Almost all of the time, though, those improvements result in cost savings. And some of the time, the government offers subsidies and tax incentives to give wineries a helping hand.

So when will consumers learn what it means to be “certified sustainable”? And how far will Sonoma Winegrowers go towards helping consumers understand the difference between organic and sustainable? I interviewed David Gates, the highly respected vineyard manager for both of Ridge Vineyards estates – including one in Sonoma and one in Cupertino – for an article in 2014 on the costs of getting certified organic, and in the course of that, I asked him why the winery went for the organic certification. His answer was that organic had clear standards, and “certified sustainable” programs did not.

“With sustainability, you can’t give a three sentence explanation of what sustainability is that means anything,” he said. “People trust you when you say you’re organic…I decided that it we were going to do this, I wanted us to be certified.”

So where’s the trust with “certified sustainable”? For those in the business who know, it creates more mistrust as trust. The organic people think it’s insulting to people’s intelligence. It’s a bet on consumer ignorance and confusion, which are never in short supply.