Bay Area is doing much better due to early shelter in place (see chart below, we rock!), let’s keep it up

“On March 16 six San Francisco Bay Area counties announced a “shelter in place” order—Alameda, Contra Costa, Marin, San Francisco, Santa Clara, and San Mateo. They were the first in the nation to take that drastic step….”

.…”What that chart shows so well is that the growth of the pandemic is logarithmic—it’s exponential, with current rates of infection doubling every 2-3 days. That means that if we did nothing, just let the disease run its course, we’d have over 2 million dead in just three weeks.” 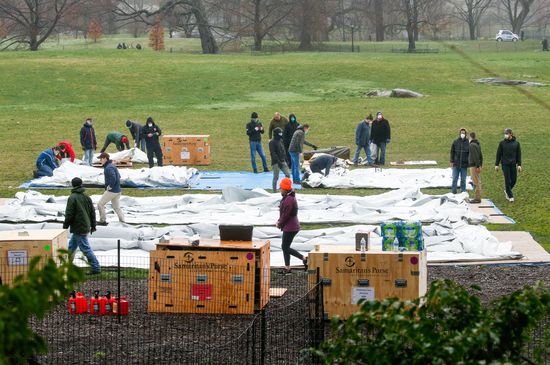 Attribution: AFP via Getty Images
Workers set up a camp in front of Mount Sinai West Hospital inside Central Park on March 29, 2020 in New York City.

On March 16 six San Francisco Bay Area counties announced a “shelter in place” order—Alameda, Contra Costa, Marin, San Francisco, Santa Clara, and San Mateo. They were the first in the nation to take that drastic step, and can you believe that that was less than two weeks ago.

Three days later, New York Mayor Bill de Blasio suggested that his city needed to follow suit, and Gov. Andrew Cuomo, the same guy getting so much praise today, thought it was the dumbest f’n idea possible. “Look at your words, ‘shelter in place,’ you know where that came from? That came from nuclear war,” Cuomo told reporters on March 19. “What it said is people should go into an interior room of their home with no windows, stay there until they get the all-clear sign. Now, that’s not what people really mean, but that’s what it sounds like. Misinformation, emotion, fear, panic,“ he added, are “truly more dangerous than the virus.”

He added, “I would have to authorize those actions,. It’s not going to happen.” Two days later, Cuomo ordered a shelter in place for his state, calling it a “pause” so de Blasio wouldn’t win. But even that delay cost the city dearly.

Now look at the growth of cases in New York City and the Bay Area:

Using a log scale, one that increases exponentially rather than linearly, and adjusting the times so that the chart begins at a time when both regions had the same number of cases, and you can clearly see how a single week of shelter-in-place made such a massive difference:

In the time that NYC went from around 800 cases to over 3,000, the Bay Area’s case numbers increased only around 300-400. And even now, things are relatively calm here. Keep in mind, the divergence in responses at the time was controversial.

Here’s the thing, at least New York shut down. And New Yorkers are the longest-lived people in the country—they are healthiest, from walking everywhere, to a lack of elevators and escalators in old apartment buildings, to low rates of obesity, to a world-class healthcare system.

The city is slammed with cases right now, and the worst is yet to come, but there are ongoing efforts to “flatten the curve”—the slow and extend the transmission of the diseases, so that hospitals aren’t slammed with patients all at once. What happens as the disease spreads to less healthy areas of the country (which is almost everywhere else)?

Here’s a map of states that still aren’t doing shit:

The green states have shut down. Those orange and red states? They aren’t taking this pandemic seriously. And if you want to be terrified, go to that site and click through state by state. What they have done is run a model that predicts how many people will die in each state with various measures enacted.

Horrifying, yes. But it gets so much worse for states that still haven’t shut down:

California, by far the largest state, is over 12% of the population of the United States. Any state that loses more people to COVID-19 than California—despite the state being an early foothold for the disease—has so mismanaged its response that its leadership deserves to be tar and feathered. That the states above still haven’t taken this disease seriously enough to issue shelter-in-place orders is downright criminal. Hundreds of thousands of people might die as a result.

Now, those numbers aren’t set in stone. The ActCovidNow.org models provide the dates upon which these states will hit their point of no return. For example, Tennessee still has three weeks before its hospitals are overloaded. Texas about two and a half weeks. Florida a little over two weeks. We can still avoid the worst of this disease if the leadership in those states acts.

The problem, of course, is that those states are all run by Republicans, and Trump-loving Republicans. And if Trump is talking about opening up the country by Easter, which is Sunday, April 12, then they won’t want to do anything to undermine Trump’s “leadership” of the crisis. (Mississippi’s useless Republican governor even invalidated local stay-in-place orders from mayors!) The rot starts at the very top, with a president who only cares about the immediate message and PR, as opposed to listening to the experts on the long-term (very painful) solution. So it leads to ridiculous moments like this one:

ABC: You told CNBC a month ago that the coronavirus was “contained.” Why should people trust you?

LARRY KUDLOW: “Look, I’m as good as the facts are. At the time I made that statement, the facts were — contained … a lot of people agreed with me.” (Experts did not agree w/ him) 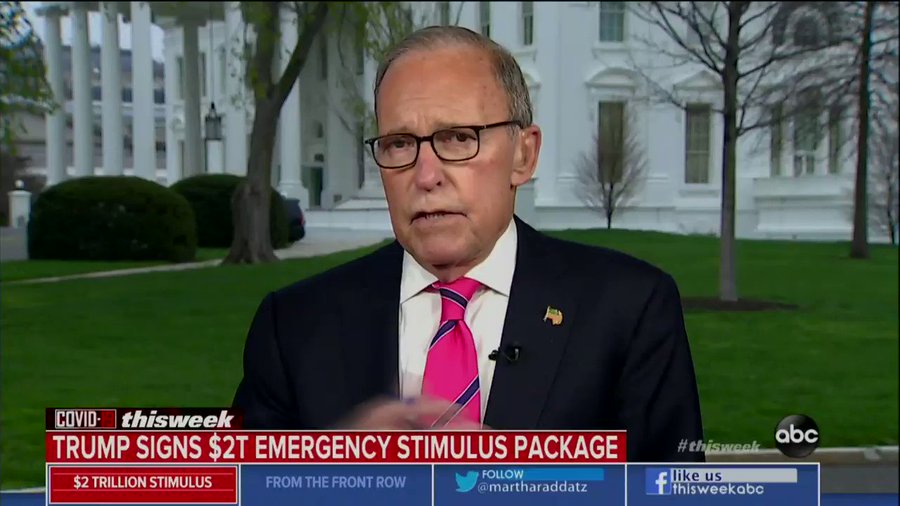 Of course, a lot of people didn’t agree with him, and the experts certainly did not. You know who did, and led him to say what he did? Donald Trump. And Trump rules their worlds. That’s why we have shit like this RIGHT NOW:

What the hell is Florida still doing having open beaches? Well, Trumpian governor Ron DeSantis refuses to do anything to undermine Trump’s message that “everything is getting better.” And you know what? Florida isn’t as young and healthy as New York. So when you see 320,000 potential deaths in Florida if they don’t move to restrict people, it’s all too believable. Every day matters. Every second delayed matters, with real lives at stake.

Here, let’s look at this chart to terrify the hell out of everyone. This was made by community member sufeitzy yesterday:

What that chart shows so well is that the growth of the pandemic is logarithmic—it’s exponential, with current rates of infection doubling every 2-3 days. That means that if we did nothing, just let the disease run its course, we’d have over 2 million dead in just three weeks.

Let me say that again: left unchecked, the disease would kill 2 million Americans IN THREE WEEKS.

That’s why every single day that any state delays in shutting things down means people will die.

Now, of course, we won’t see that many deaths. Half the country is in lockdown. The curve is already being flattened in California and other large states. Even New York will see the worst of it ebb in a couple of weeks. That will eventually flatten that exponential growth in deaths.

But states that don’t take action will get hit.

I’ve sorted the chart by new cases. The New York area is currently getting slammed. New Jersey is fast becoming a New York. Washington has its caseload under control, finally. Look how far down California is, despite having twice the population of New York and being an early nexus of the pandemic, along with Washington State.

We know that Mardi Gras fueled the pandemic in Louisiana, and things are getting rough there. Detroit and Chicago are rising too quickly, fueled by equipment shortages that shouldn’t exist. But, you know, Trump:

But what’s terrifying in that chart is that two large, Republican-led states, Florida and Texas, are rising way too quickly up that chart. Go ahead and refer back to those worst-case scenario numbers further above—and we see how they’re moving too quickly toward that “hundreds of thousands of dead” scenario if they don’t take action. Indiana is up there! Tennessee! (Next-door Kentucky, with a Democratic governor who was quick to shut the state down, is seeing a fraction of the cases.)

So the moral of the story? Stay in place orders work, and if we don’t see them implemented at the national level, we’re going to see some horrific death rates in just a few short weeks. Every day matters. Every day counts.

Outside of war, politics is so rarely life-and-death as it is today.

Update: Florida is going to be rough.