Skip to content
“For the first time in recorded history, tiny bark beetles emboldened by the climate crisis have started to kill giant sequoia trees, according to a joint National Park Service and US Geological Survey study set to be published later this year. Twenty-eight have gone since 2014. The combination of drought stress and fire damage appears to make the largest sequoias susceptible to deadly insect infestations that they would usually withstand.”
The age of extinction

‘This is not how sequoias die. It’s supposed to stand for another 500 years’

Find more age of extinction coverage here, and follow biodiversity reporters Phoebe Weston and Patrick Greenfield on Twitter for all the latest news and features

Giant sequoias were thought to be immune to insects, drought and wildfires. Then the unthinkable happened: trees started to die – and scientists began the search for answers

The fable of the giant sequoia tree is an enduring tale of America’s fortitude. Standing quietly on the western slopes of the Sierra Nevada, the Californian giants can survive almost anything – fire, disease, insect attack, cold years, hot years, drought – so the story goes.

The largest living organisms on the planet can grow over 90 metres (300ft) tall. When they do die after 3,000 years or so, the oldest trees, known as monarchs, usually succumb to their own size and collapse. Their giant trunks will rest on the forest floor for another millennium. 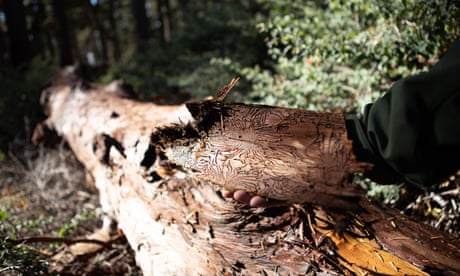 But the miraculous story of the near-indestructible giant trees that millions of Americans tell their children is no longer true.

For the first time in recorded history, tiny bark beetles emboldened by the climate crisis have started to kill giant sequoia trees, according to a joint National Park Service and US Geological Survey study set to be published later this year. Twenty-eight have gone since 2014. The combination of drought stress and fire damage appears to make the largest sequoias susceptible to deadly insect infestations that they would usually withstand.

One of the 28 is the optimistically named Lazarus, which stands in the Giant Forest in Sequoia national park, surrounded by other sequoias and a handful of cedars and pines that died in California’s great drought.

When Dr Christy Brigham, who is responsible for the welfare of the ecosystems in Sequoia and Kings Canyon national parks, saw Lazarus for the first time, all she could do was weep.

“This is a tree that has lived through 2,000 years of fires, other droughts, wet years, dry years, hot years, cold years. It’s been here longer than Europeans have been in this country and it’s dead. And it shouldn’t be dead. This is not how giant sequoias die. It’s suppose to stand there for another 500 years with all its needles on it, this quirky, persistent, impressive, amazing thing, and then fall over. It’s not supposed to have all of its needles fall off from the top to the bottom and then stand there like that. That’s not how giant sequoias die,” she says, standing next to the skeletal Lazarus as the occasional tourist wanders past.

Even as tens of millions of trees died around them in California’s historic drought, reassuringly the vast majority of giant sequoias appeared to stand strong, as they had always done. But in 2017, Dr Nathan Stephenson, a forest ecologist with the US Geological Survey, noticed a dead branch showing signs of beetle damage had fallen from a giant sequoia. Trees had died standing since 2014, but the fallen branches were the first indication of what might be going on. Other researchers took samples of live branches from the top of sequoias that were dying from the top down and incubated the branches for further research.

“Hundreds of beetles came out of these pieces of branch. We went back the next spring and that part of the tree that had been sampled was now dead,” he recalls, detailing how the giant sequoia faded to its death from the top down. Stephenson emphasises that there is still further research to do on how bark beetles are killing giant sequoias but he is clear on one thing.

“I think beyond reasonable doubt in the limited set of circumstances, which was the most severe drought on record and all the trees had had a recent fire at their base, you can weaken giant sequoias to the point that bark beetles can kill them.”

The post-mortem site of another monarch that died in this way stretches along the forest floor a short walk from Lazarus. The tree, unnamed, had been felled and cut into chunks to protect tourists passing on a nearby road. At what would have been the top, the bark exhibits the telltale cause of death: the elegant spirals and grooves of beetle galleries, formed where the insects are thought to have entered and slowly killed the weakened tree.

It is hard not to reflect on what the dead giant sequoia had endured and what awaits other trees in California’s groves. As CO2 levels continue to rise, wildfires grow in intensity and the climate crisis alters ecosystems in just a few years, what does the future hold for these giants of the forest?

“Predicting the future is a fool’s errand. But I would expect a ramping up of what we’ve already seen,” Stephenson says. Stephenson does not expect the widespread mortality events seen in other trees on the west coast but as everyone the Guardian speaks to emphasises, nobody has seen this before.

More than a century of fire suppression has hurt the health of these forests. Since the late 1880s, landscapes that are meant to burn regularly in California have not, causing a huge buildup of wood and dead trees on the forest floor. When the inevitable fires do come, they are increasingly not slow, smouldering blazes that clear the forest floor and invite new life to thrive. The fires are intense, more regular than they should be, incinerating monarch sequoias that should be able to survive.

Those trees that have succumbed from the top down in the drought – flagging first, then turning deathly autumnal orange – now stand grey on the mountainside in their millions, including many at famous views in Yosemite.

Yosemite national park, famous for its climbing, landscapes and wildlife, is struggling to deal with the wave of dead trees. They line roads, threatening to topple on cars, campsites, buildings. Dead trees are felled every day just to keep the forest safe, but there is only so much that can be done.

The bark beetle thought to have killed the sequoias, Phloeosinus punctatus, is different to the pine and spruce beetles that have claimed hundreds of millions of trees in Siberia, Europe and North America. But scientists are concerned about the classification of Phloeosinus and want further study.

Find more age of extinction coverage here, and follow biodiversity reporters Phoebe Weston and Patrick Greenfield on Twitter for all the latest news and features