“Today, ecology is taking a big step. A giant step.”

The newly elected mayor of Bordeaux, Pierre Hurmic (R) of the Greens Party, takes part in a meeting with members of his campaign team on June 29, 2020, a day after the second round of the French mayoral elections. (Photo: Mehdi Fedouach/AFP via Getty Images)

That is how Yannick Jadot, a European Parliament lawmaker from the Europe Écologie Les Verts (EELV) Party, described a slate of victories for the Greens in the second round of local French elections on Sunday.

The second round of voting, which followed the first round on March 15, was postponed due to the ongoing coronavirus pandemic. Yet even with the delay, Sunday saw “an historic level of abstention,” the Guardian reported. “More than 60% of local mayors had been already decided in the first round, but many major cities and towns, including Paris, Marseille, Toulouse, and Lyon, remained up for grabs.”

Andreas Heinemeyer
@AndreasHeinem
This is HOPE! We all have to finally break away from further destruction and move on to #BuildBackBetter – @europeangreens Greens surge in French local elections
Voters stay away from second round of French local elections
Coronavirus hits turnout as early results show Anne Hidalgo remains as Paris mayor
theguardian.com

Exit polling showed EELV candidates—who, in some cities, joined forces with other leftist parties—winning in Annecy, Besançon, Bordeaux, Grenoble, Lyon, Marseille Poitiers, Strasbourg, and Tours, according to Reuters and EuroNews, which noted that “the alliances they formed will also see them play key roles in other local councils across the country, including in Montpellier but also in Paris.”

These are all the new Green Mayors elected in France yesterday. Incredible results including in #Lyon, #Marseille, #Bordeaux #Strasbourg, #Grenoble #Tours #Annecy and #Poitiers ! #Municipales2020

Very litttle coverage in the UK of a political earthquake. 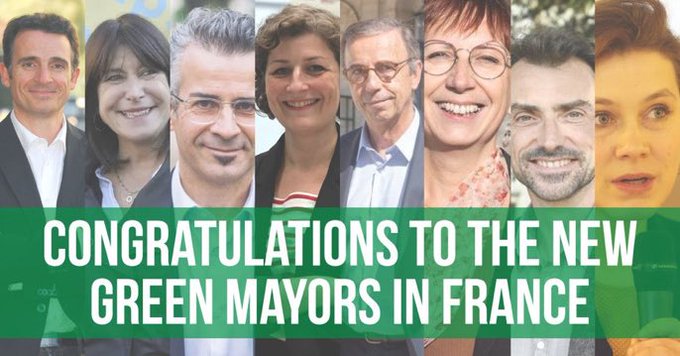 2:23 AM · Jun 29, 2020Paris Mayor Anne Hidalgo, a member of the Socialist Party who first took office in 2014, won another six-year term by a large share of votes by in the French capital Sunday. Hidalgo recently created the “Paris in Common, Ecology for Paris” alliance with David Belliard, leader of the Green Party fraction in the Council of Paris and a mayoral candidate who came in fourth during the first round of voting in March.

“You chose hope, you chose unity, you chose a Paris that breathes, a Paris that will be more pleasant to live in, a more united city, which leaves no one on the side of the road,” Hidalgo said after her victory Sunday. “I hope that all the forces working in service of our fellow citizens are involved in the transformation of our city, which is all the more urgent because of the crisis we are going through.”

The mayor—who earlier this month released a manifesto with Belliard that calls for banning diesel cars, halving parking spaces, reducing speed limits—told voters that “with you we will build the Paris of tomorrow.”

“A Paris that gives resources to its public services so that they can carry out their missions, in particular for the health of Parisians,” she said. “A Paris that allows everyone to change their way of life, to move better, to eat better, with respect for our environment as a common value. A united Paris that helps those who need it most. A Paris of difference that fights all forms of discrimination. A Paris that gives its youth a real chance and that gives them the keys to act.” 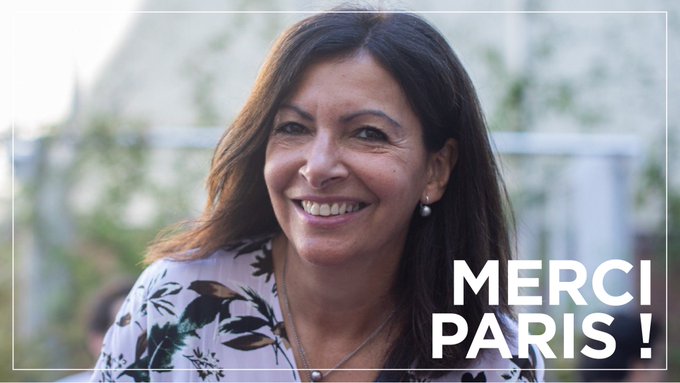 Paris is so lucky to have such a visionary @c40cities mayor, congratulations.

The wins for the Greens in across France came as La République En Marche! (LREM), a centrist party launched by Emmanuel Macron just before his 2017 presidential victory, “received a drubbing on Sunday in municipal elections,” as Reuters reported.

Macron had hoped the elections would help anchor his young party in towns and cities across France, including Paris, ahead of an anticipated 2022 reelection bid.

But aides had more recently been playing down expectations and the sweeping wins by the Greens, who in some cities joined forces with leftist allies, may compel Macron to reshuffle his government to win back disenfranchised left-wing voters.

“Ecology is the area where Macron is perceived as having done nothing,” Frederic Dabi, director of pollster Ifop, told Reuters. “The French will want results on green issues.”

In a perceived nod to the election results on Monday, Macron announced that a new law would be drawn up before the end of the summer to “reconcile economy and ecology.” The president said that  €15 billion would be invested in “the ecological conversion of our economy” over two years, through the end of his first term.

Sibeth Ndiaye, a spokesperson for the Macron government, previously told French television that the elections results were “extremely disappointing.” In what reporters described as the “rare” and perhaps “only bright spot” for LREM, Prime Minister Édouard Philippe won his mayoral race in Le Havre with 59% of the vote.

As The Guardian reported:

Jérôme Fourquet of the pollsters Ifop said local elections were historically a way for the population to punish those in power. However, he said it would be difficult to interpret Sunday’s results because LREM, a fledgling party created to carry Macron to power in 2017, had few outgoing mayors. While Macron’s centrist party is dominating French politics at a national level, having fragmented the traditional right and left, it has little representation locally.

“LREM will score badly because it has no outgoing mayors to lose, it has to win,” Fourquet said. “And most French mayors come from the traditional right and left. This means, in terms of sanctioning those in power, it will not be easy to read.”

He added: “Nationally, there are two main forces in politics right now, the Rassemblement National and Macron. At a national level, Marine Le Pen is his main opponent. But these two forces are not present at a local level, where Les Républicains and the Parti Socialiste are most solid.”

In a Monday analysis for The Local, Paris-based journalist John Lichfield argued that the triumph of the Greens in major cities “transforms the political landscape” but “it doesn’t mean that France will elect a Green President in 2022. The quarrelsome French Greens will find it hard to transfer their successes to national level.”

John Lichfield
@john_lichfield
I try, for The Local, to fit the Green victories in the French municipal elections into an increasingly crowded and messy political battleground in France.

The Local France
@TheLocalFrance
The triumph of the French Greens in Lyon, Bordeaux and Strasbourg and a string of smaller cities, transforms the political landscape. But outside the big cities and large towns, the Greens are almost non-existent, writes @john_lichfield
https://thelocal.fr/20200629/opinion-no-this-doesnt-mean-france-will-get-a-green-president?fbclid=IwAR1MJwaxtCkvcUV8ReXj-EGGMtSzZHZSY74xFZW4QE6EGop9H06Ul8WUoIw…

4:46 AM · Jun 29, 2020After detailing some of the major losses on Sunday, Lichfield wrote, “We are now in strange territory for French politics.” He explained:

Everything was once predictable. There were two main “families,” center-right and center-left, who took turns to govern, nationally and locally, in much the same way once they were in power. The whole two round system of elections was designed to reflect—and preserve—that status quo.

…The EELV may now emulate its green German sister party and take over the center-left lane in French politics from the divided Socialists. Even so, the dawn of the Greens threatens to add yet another competing “family” to a French political system designed for only two.

Lichfield made similar points in a series of tweets Sunday. Writer Benjamin Ramm responded by saying that “much of the important work done by the Greens is at municipal level. This is where they show that they can govern. And this in turn shapes the national landscape.”

But bitter experience suggests that if the French Greens are winning, then internal party fighting and calamity cannot be far away. Very hard for them to transfer these successes to national politics. But very interesting all the same.
Benjamin Ramm
@BenjaminRamm
But much of the important work done by the Greens is at municipal level. This is where they show that they can govern. And this in turn shapes the national landscape.
12:43 PM · Jun 28, 2020Our work is licensed under a Creative Commons Attribution-Share Alike 3.0 License. Feel free to republish and share widely.