Nuremberg trials in US? “The difference here is, this time they implemented their tactics openly and under the protection of an authoritarian president,” she continued. “If this is what they do to mostly white U.S. citizens in front of the media, imagine what they are doing to people in their custody, to people who are seeking refuge in isolated parts of the border. “

Ex-border agent: Special unit sent to Oregon among ‘most violent and racist in all law enforcement’ 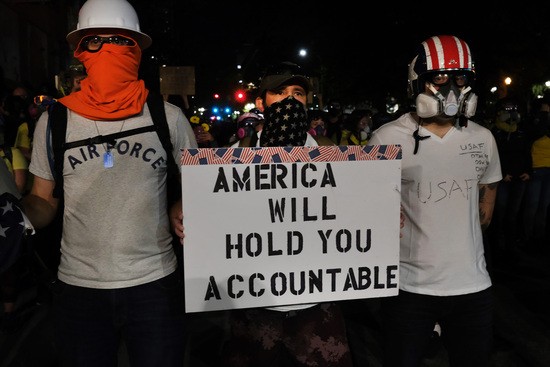 The unidentified Customs and Border Protection (CBP) special tactical agents who’ve kidnapped at least two demonstrators right off the street in Portland, Oregon, are wholly untrained in how to properly deal with large demonstrations and a former senior Border Patrol agent turned whistleblower calls the Border Patrol Tactical Unit, or BORTAC, among “the most violent and racist in all law enforcement”.

“Racism has plagued the institution for decades,” The Guardian reports. “Jenn Budd recalled that when she signed up for service in 1995 her Spanish instructor blithely informed her that Latino migrants were referenced within the agency as ‘tonks’ and ‘wetbacks.’” It’s not an isolated incident at CBP, or a dated one: As recently as 2019, agents have pleaded guilty to assaulting migrants while on duty. One agent called migrants “disgusting subhuman shit unworthy of being kindling for a fire” in the weeks before he hit a Guatemalan man with his truck and then lied about it.

“Local officials and other critics say the tactical unit, which is trained for high-risk missions and usually conducts operations along the border targeting smugglers and criminal organizations, shouldn’t be responding to a matter of civil dissent in a major city far from any national border,” BuzzFeed News reported last week.

But it’s not just that sending BORTAC to cities is inappropriate, it’s that unconfirmed Department of Homeland Security (DHS) Secretary Chad Wolf and the Trump administration are siccing dangerous and unleashed agents on U.S. cities in an authoritarian power flex whose sole purpose is not to protect U.S. cities (from what exactly?), but to help the impeached president stay in office. Budd tells The Guardian that BORTAC is more than happy to do it, because like the impeached president, the unit’s agents view themselves as above the law—and act like it.

“That strain of extra-judicial aggression runs through everything Bortac does, Budd said,” the report continued. She told The Guardian that “[t]hey view people they encounter in the military sense as enemy combatants, meaning they have virtually no rights.” She continues: “They don’t do normal vehicle stops. They will rip drivers from their seat, throw him against the side, put him in handcuffs —the same tactics you are now seeing Bortac agents use in Portland.”

This wouldn’t be the first time this year that the Trump administration has used BORTAC as part of a political and self-serving stunt. In February, BORTAC was requested to assist Immigration and Customs Enforcement (ICE) in sweeping up immigrants and separate families in a number of immigration raids across major cities, a move slammed by legislators including Massachusetts Sens. Ed Markey and Elizabeth Warren.

“The BORTAC deployment to Boston and other cities is unnecessary, unwelcome, and dangerous,” Markey and Warren said at the time. “But the specter of heavily armed, military-like personnel in our cities will accomplish one thing: provoke fear.” Of course, that’s the point—to cause fear, and to win at any cost.

But so are we. It’s time to get DHS, ICE, and CBP under control now. “The federal agents who descended on the city, uninvited and unwelcome, in unmarked vehicles, disappearing people with little to no regard for civil liberties, come from the Department of Homeland Security,” Marisa Franco, director of advocacy group Mijente, said in a statement received by Daily Kos. “This agency is bloated, overfunded, and it operates with impunity. At Mijente, we’ve been sounding the alarm for years.”

“The difference here is, this time they implemented their tactics openly and under the protection of an authoritarian president,” she continued. “If this is what they do to mostly white U.S. citizens in front of the media, imagine what they are doing to people in their custody, to people who are seeking refuge in isolated parts of the border. Trump must be defeated in November. Trumpism must be defeated as well. That means dismantling agencies like DHS, which oversees Immigration and Customs Enforcement and Customs and Border Patrol.”