Teachers nationwide are ready to “rumble”….

“I think we are closer right now to a national teacher strike than we have ever been in this country.”

School counselor Chloe Gerbec and teachers Malikah Armbrister and Brittany Myers stand in protest in front of the Hillsborough County Schools District Office on July 16, 2020 in Tampa, Florida. Teachers and administrators from Hillsborough County Schools rallied against the reopening of schools due to health and safety concerns amid the Covid-19 pandemic. (Photo by Octavio Jones/Getty Images)

As teachers and parents across the U.S. continue to express outrage over the federal government’s demand that public schools fully reopen in the next few weeks for the fall semester, some educators are looking to revitalize the nationwide Red for Ed movement of 2018 which led thousands of them to walk out of their classrooms in a fight for better conditions and wages. 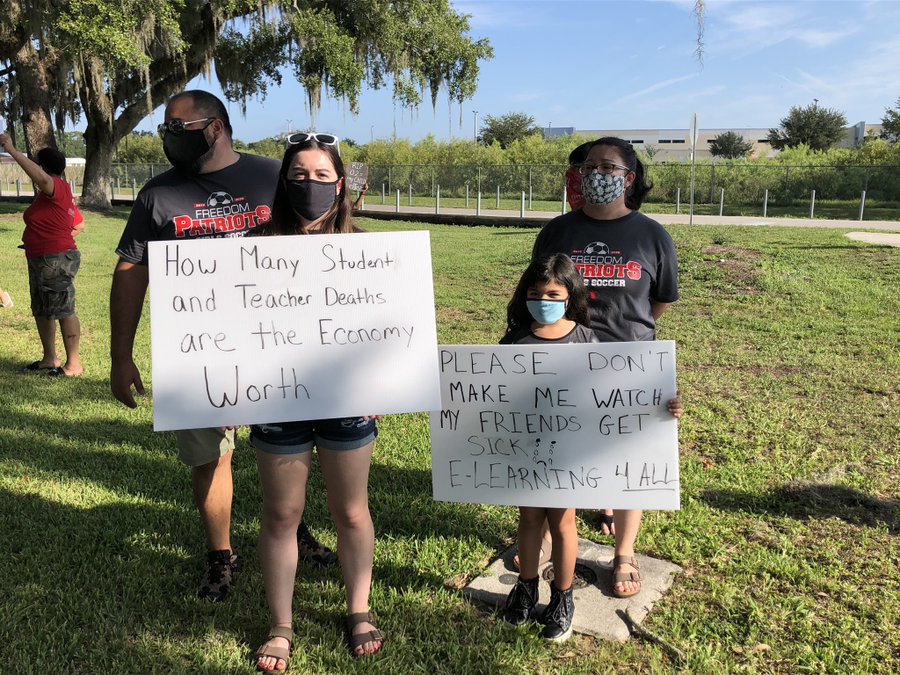 The original wave of protests in Oklahoma, Arizona, West Virginia, and other states were focused on properly funding public schools and paying teachers and support staff to ensure a quality education for students.

Now teachers in Florida, where more than 100 Covid-19 deaths have been recorded per day for four days in a row, are demonstrating with signs reading, “Red for Ed, Not Red for Dead” as they express anger over the Trump administration’s refusal to ensure schools have safety measures in place in the fall and its simultaneous insistence that schools are “fully operational.”

Teachers in Tampa are protesting this week as officials decide whether to adopt a hybrid teaching model this fall, with some in-person instruction and some remote.

In June, the American Federation of Teachers (AFT) conducted a poll of its 1.7 million members and found that two-thirds hoped to teach in person at least part-time this coming school year, provided the government ensures there are proper ventilation and sanitation systems, masks, and the ability to socially distance at schools.

But this month, as the CDC has released guidelines recommending that schools are able to follow those protocols, President Donald Trump dismissed those requirements as “very tough and expensive” to provide.

Last weekend, Education Secretary Betsy DeVos appeared on Fox News to repeat an earlier threat to schools which don’t fully reopen in the fall, regardless of the administration’s refusal to ensure they can do so safely, saying they should face funding cuts. Republicans in Congress are reportedly considering making emergency school funding conditional on reopening in the next coronavirus relief package.

“It’s as if Trump and DeVos want to create chaos and want to jeopardize reopening,” Randi Weingarten, president of AFT, told The Guardian. “There’s no other reason why they would be this reckless, this callous, this cruel.”

Jessica Salfia, a teacher in West Virginia who participated in the Red for Ed strikes in 2018, told New York magazine that DeVos, a proponent on school voucher programs which pull funding from public schools, is using the deadly pandemic to “dismantle public education” once and for all.

“There is no doubt in my mind it is a calculated attempt,” Salfia told New York on Friday. “There is no other reason to put our teachers and our schools in danger and to push us to reopen.”

Weingarten expressed fear that, fed up with chronically underfunded schools and mistreatment by federal and state leaders, many teachers will simply leave the profession if the government tries to force them back into schools amid the pandemic.

“Their recklessness scared people so much that now I fear a brain drain of people basically opting out of teaching, because they don’t want to jeopardize their own families,” Weingarten told The Guardian.

So far, some of the nation’s largest school districts have refused to participate in the Trump administration’s potentially-deadly experiment in the fall. Los Angeles and San Diego schools are opting to use an online learning model, and New York City schools will hold some in-person classes and will stick to online instruction for others.

“Academically our students will fall behind, but we can help them recover from that situation,” Lisa Kamp, a special education teacher in Tulsa, Oklahoma told New York. “However, our students cannot recover from death by coronavirus.”

Kamp told the magazine that she would support another Red for Ed movement taking hold in Oklahoma the way it seems to be in other states.

In Arizona, teachers held “motor marches” on Wednesday, lining up in a caravan in their cars to demand state leaders consider suspending in-person classes. Schools in the state are set to open August 17, and hospitals are currently reporting record use of ventilators to save the lives of Covid-19 patients.

In West Virginia, Salfia said she believes outrage over the federal government’s approach will only continue to spread as case numbers climb and the beginning of the school year approaches.

“There is a certain energy right now that feels very similar to January 2018,” Salfia told the magazine, referring to the original Red for Ed protests. “I think we are closer right now to a national teacher strike than we have ever been in this country.”