“According to the Corps, the operations would permanently destroy more than 2,200 acres of wetlands and waters, and 105 miles of streams.”

The Pebble Mine, which would be the largest in North America, was halted by the Obama administration out of concern it would irreversibly damage the famous sockeye salmon fishery.

By Juliet Eilperin and Brady Dennis

Trump officials concluded Friday that a proposed gold and copper mine in Alaska — which would be the largest in North America — would not pose serious environmental risks, a sharp reversal from a finding by the Obama administration that it would permanently harm the region’s prized sockeye salmon.

The official about-face regarding the bitterly contested project epitomizes the whiplash that has come to define environmental policy under President Trump, who has methodically dismantled many of his predecessor’s actions on climate change, conservation and pollution.

A final environmental analysis issued Friday by the U.S. Army Corps of Engineers found that Pebble Mine — which targets a deposit of gold, copper and other minerals worth up to $500 billion — “would not be expected to have a measurable effect on fish numbers” in the Bristol Bay watershed, which supports the world’s largest sockeye salmon fishery.

The Obama administration, which looked at multiple project scenarios, concluded in 2014 that a major mine in the area could cause irreparable harm. 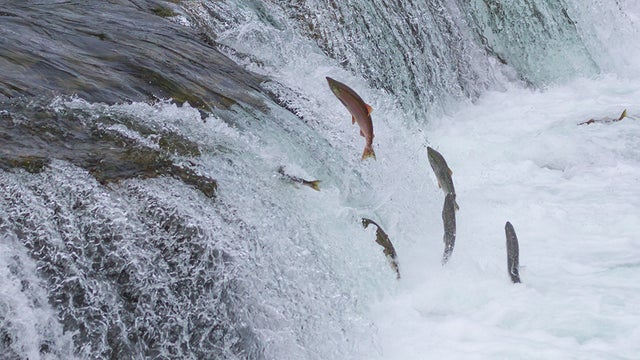 The bitter fight over Pebble Mine has raged for nearly two decades. Halted by the last administration, the project has been fast-tracked under Trump and is poised to get final federal approval by the end of the year. But a coalition of local residents and national environmental groups will challenge the permit in court, and the next administration could block it once again if Democrats win the White House in the fall.

It is just one of several huge infrastructure proposals with a fate that depends on this year’s presidential election. Trump has sought to expedite two major oil and gas pipelines that the Obama administration had blocked: Keystone XL and Dakota Access. Both have encountered legal setbacks in recent months, and presumptive Democratic presidential nominee Joe Biden has already pledged to stop Keystone if elected on the grounds that it would accelerate climate change. Another major Trump administration initiative in Alaska — lifting logging restrictions in Tongass National Forest, the world’s largest temperate rainforest — might also be reversed if the president fails to win a second term.

Marcella Burke, who served as one of the top lawyers at the Environmental Protection Agency and Interior Department under Trump and is now a partner at King & Spalding, said the private sector has come to expect this sort of regulatory seesaw. Even as Trump has uprooted so many of Barack Obama’s energy and environmental policies, businesses are aware that next year could bring a reversal of the reversals.

“In between administrations, you’re going to get different results,” she said. “That’s just reality, especially in places like Alaska.”

If constructed, the proposed 20-year mining operation will transform an area that is now dominated by a $1.4 billion commercial, recreational and subsistence salmon fishery. The Canadian company behind the project is planning a mine that will span more than 13 miles and require the construction of a 270-megawatt power plant, natural gas pipeline, 82-mile double-lane road, elaborate storage facilities and the dredging of a port at Iliamna Bay. Trucks would make more than a dozen round trips a day to transport the minerals, which would be fed through the processing plant at a rate of 180,000 tons per day.

According to the Corps, the operations would permanently destroy more than 2,200 acres of wetlands and waters, and 105 miles of streams. The EPA indicated earlier this year that it would not block the project at this point.

Friday’s announcement marks a major victory for the sponsors of Pebble Mine, which appeared doomed at the end of Obama’s second term. The EPA preemptively vetoed it in 2014 on the grounds that it would imperil the sockeye salmon fishery.

But after Trump’s election, Pebble Limited Partnership filed for a federal permit with the Corps in late 2017, and the agency’s detailed environmental analysis has found that it would not damage the watershed.

In an interview Wednesday, Pebble Partnership CEO Tom Collier called the completion of the federal environmental review “the most significant day in the 15-year history of the Pebble Project.”

Collier, who served as Interior Secretary Bruce Babbitt’s chief of staff during the Clinton administration, said that the technical record assembled over the past two and-a-half years would impede any attempt to overturn the Trump administration’s findings.

Collier also said that the project is now “dramatically different” from the one proposed during the Obama administration. For instance, he said, the project is now smaller and includes measures to prevent contamination from the stored waste that results from mining.

“We took a lot of environmental risk out of this project,” he said of the design changes.

But Taryn Kiekow Heimer, who directs a campaign by the Natural Resources Defense Council to halt the project, said the administration’s push to greenlight a massive project that is opposed by neighboring indigenous communities amounts to environmental injustice.

“It’s especially embarrassing for the government and appalling given the current social context we are in,” she said of the accelerated approval process. “It’s just another example of the entrenched and systemic racism that this government is showing to people of color and indigenous people in particular.”

The Corps did not grant a permit to the company: that would come in a final Record of Decision, which cannot be issued for at least 30 days. The firm will also have to apply for state permits, and Collier said he expects it will take another three years before construction could begin.

Still, even as the mine’s opponents called the administration’s assessment flawed, they described it as significant step in the process.

Bristol Bay Native Corporation CEO Jason Metrokin, whose group ranks as the region’s largest private landowner and whose members account for the majority of the region’s population, said in a phone interview that the agency ignored input from key experts and constituencies.

Two months ago the Corps changed the government’s preferred transportation route from the mine to a land crossing to Cook Inlet, rather than one using an ice-breaking ferry, which many local residents said would impede subsistence hunting and travel over the frozen lake. But many landowners along the 82-mile long path, including the Bristol Bay, Pedro Bay and Igiugig Native corporations, have already said they will not allow their property to be used for the mine’s operations.

“Put simply, the (environmental impact statement) does nothing to alleviate our concerns about the myriad risks Pebble would pose to Bristol Bay’s watershed, salmon, way of life, and economy,” Metrokin said, adding that since the 20-year plan would only extract 13 percent of the deposit, the mine operations could expand over time.

Collier, who will get a roughly $4 million bonus if the mine receives a favorable Record of Decision from the Corps and another $8.4 million if the permit can withstand a legal challenge, said he is certain his company will receive the rights of way it needs to construct the planned road.

Alaska Natives, environmentalists and local businesses have vowed to challenge the Corps’ final decision in court, and the EPA retains the right at any time to invoke a veto under Section 404(c) of the Clean Water Act.

In one such community, Igiugig, the village council on Thursday released a statement reiterating that its lands are “unavailable for use” related to the proposed mine.

“[We are] committed to the sustainability and health of future generations and Pebble does not fit into our vision for a thriving future,” the council wrote.

The EPA’s 2014 assessment identified several problems with the northern transportation route, noting it crosses critical streams with salmon populations that could die off if the tunnels connecting waterways under roads failed.

Katie Sweeney, executive vice president and general counsel for the National Mining Association, said in an interview that it would not be appropriate for EPA to issue a veto after approving a permit, even if it’s legally permissible.

“Hopefully we’d see that process is used at the appropriate time,” she said, adding the Obama administration vetoed it preemptively before the company applied for federal approval. “What you’re really doing is undermining investment confidence, and not just in mining projects.””

Juliet Eilperin is The Post’s senior national affairs correspondent, covering federal environmental policy. She received the 2020 Pulitzer Prize for explanatory reporting and has written two books, “Demon Fish: Travels Through the Hidden World of Sharks” and “Fight Club Politics: How Partisanship is Poisoning the House of Representatives.” Follow

Brady Dennis is a Pulitzer Prize-winning national reporter for The Washington Post, focusing on the environment and public health. He previously spent years covering the nation’s economy.