“David Keller, with the group Friends of the Eel River — representing a Northern California watershed that has been impacted by logging and land development — says this type of behavior, combined with agency leniency, renders laws meant to protect forests and watersheds meaningless.

“As long as there is no jail time, these vineyardists are happy to go ahead and do whatever they want, and the fines are just a write-off — they’re a part of doing business for these people,” Keller says.

“There are now so many violators in these hills that the county is unable to enforce the rules,” Anderson says. “Whether it’s lack of will or wherewithal, they aren’t doing it.” 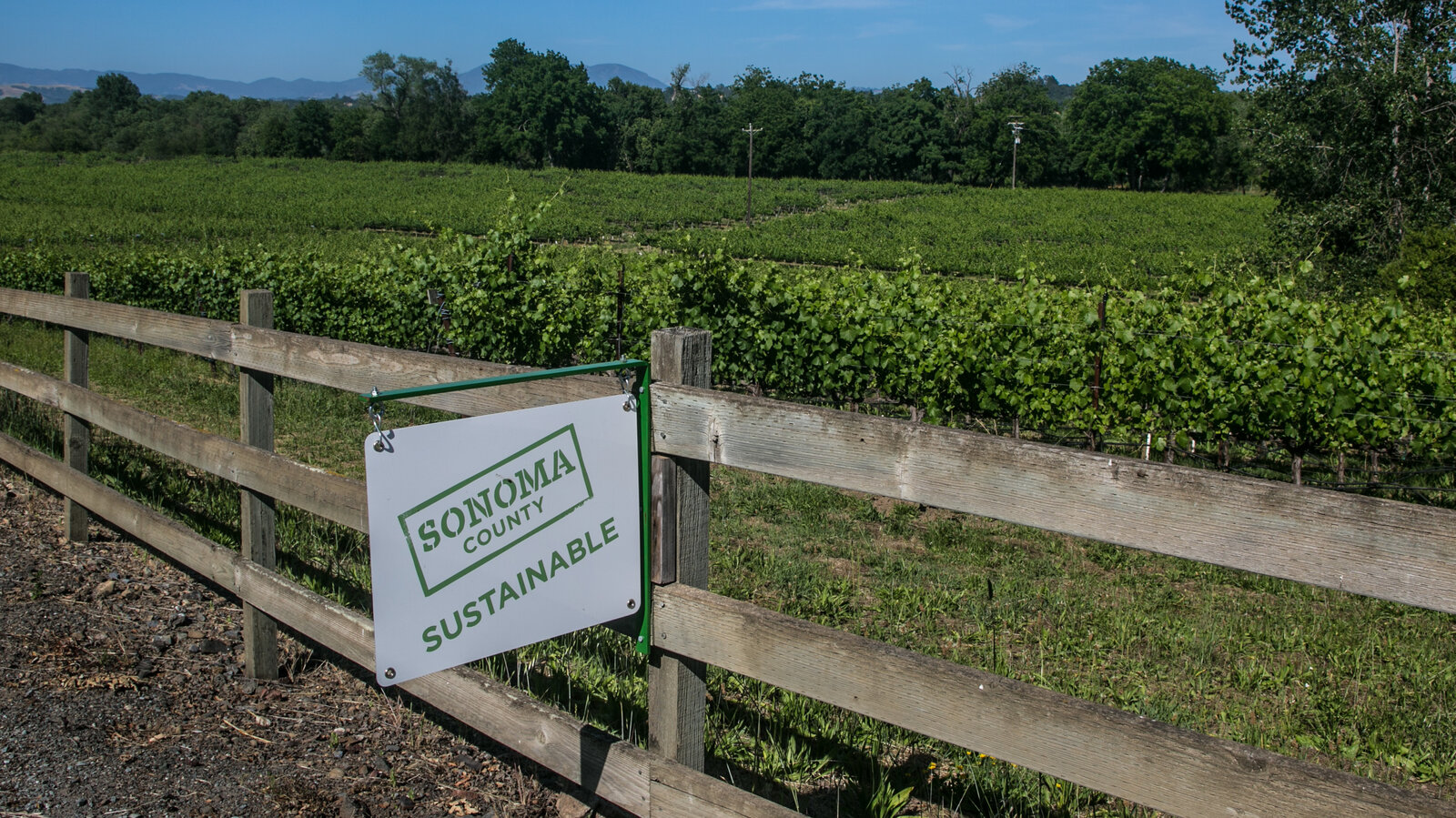 A “Sonoma Sustainable” sign hangs along a road in the Russian River Valley near Healdsburg, Calif.

After California wine industry mogul Hugh Reimers illegally destroyed at least 140 acres of forest, meadow and stream in part to make way for new vineyards sometime last winter, according to a report from state investigators, state officials ordered the former executive of Jackson Family Wines to repair and mitigate the damage where possible. Sonoma County officials also suggested a $131,060 fine.

But for environmental activists watching the investigation, fines and restoration attempts aren’t going to cut it; they want Reimers — an experienced captain of industry whom they say knew better — to face a criminal prosecution, which could lead to a jail sentence.

“We want him to be an example of what you can’t do here,” says Anna Ransome, founder of a small organization called Friends of Atascadero Wetlands. In August, the group sent a letter to Sonoma County District Attorney Jill Ravich, asking that she prosecute Reimers.

“If winemakers can figure into their budget paying fines and doing minimal restoration work, then what’s to stop the next guy from doing the same thing?” Ransome says.

The D.A.’s office did not return requests for comment. Multiple efforts to reach Reimers for comment were unsuccessful. On Nov. 13, a sign posted outside of an address listed for him that appears to be a residence read “Media Keep Out.”

Ransome’s concerns have been echoed by other environmental and community activists in Northern California who decry a pattern of winemakers violating environmental laws, paying relatively meager fines for their actions, and eventually proceeding with their projects.

For example, high-society winemaker Paul Hobbs now grows grapes on at least one small Sonoma County parcel that he cleared of trees in 2011 without proper permits. Though his actions on several locations where he removed trees caused community uproar, officials fined Hobbs $100,000 and allowed him to carry on with his business. Paul Hobbs Winery is listed by the Sonoma County Winegrowers website as certified sustainable.

In another case, multiple agencies issued a $3.7 million fine against Silicon Valley entrepreneur and vintner Kevin Harvey after those agencies concluded that he illegally destroyed a Mendocino County wetland and buried a small creek with excavated dirt as he made way for a new grid of grapevines. The wealthy venture capitalist paid the penalty and was allowed to keep the vineyard, which, according to state authorities, Harvey “insisted on retaining.” This concluded the investigation — as officials determined that the destruction Harvey caused was so thorough and complete that asking him to restore the land to its natural state was futile.

David Keller, with the group Friends of the Eel River — representing a Northern California watershed that has been impacted by logging and land development — says this type of behavior, combined with agency leniency, renders laws meant to protect forests and watersheds meaningless.

“As long as there is no jail time, these vineyardists are happy to go ahead and do whatever they want, and the fines are just a write-off — they’re a part of doing business for these people,” Keller says.

In Napa County, adjacent to Sonoma and the source of perhaps the most expensive cabernet sauvignon outside of Bordeaux, activists are pushing back against a steady conversion of woodland into new vineyards. Kellie Anderson, an independent watchdog who has harried local officials for years to step up enforcement of environmental laws, says the county’s planning department has ignored numerous violations by grape growers.

“There are now so many violators in these hills that the county is unable to enforce the rules,” Anderson says. “Whether it’s lack of will or wherewithal, they aren’t doing it.”

“We’ve probably collected about a million dollars in fines in the past five years,” he says.

Morrison notes that the legal landscape of Napa County, especially as it pertains to wine production, is very complex, and he says it’s easy for rules to be broken without immediate resolution.

“The more rules you have, the easier it is to violate them,” he says.

But activists insist that Napa County is too charitable to an industry they think is harming the environment. In fact, as a gesture of diplomacy, Napa County recently invited winery and vineyard owners who have violated their operating permits, often by exceeding wine production, customer visitation or employee limits, to submit requests for upgraded permits – part of the county’s Code Compliance Program.

“They break the law, and instead of the laws being enforced, they’re retroactively approving these projects,” says Geoff Ellsworth, the mayor of the small wine country town of St. Helena, in Napa County.

Ellsworth says many of the violations being considered through the Code Compliance Program can directly cause aggravated traffic and air pollution, and that excessive wine production places demands on growers for more grapes. Ultimately, he says, the county’s stance on winery violations could lead to more deforestation and water use.

Morrison says the Code Compliance Program is intended to smooth out violations in a diplomatic way.

“The county wants to encourage compliance, not be punitive,” he says.

As for general objections against the wine industry’s encroachment into woodlands, Morrison says that even though Napa County’s vineyard acreage is growing, their collective footprint on the landscape still remains well within limits set years ago by county planners.

In the ongoing Reimers case, the North Coast Regional Water Quality Control Board issued Reimers, the manager of Krasilsa Pacific Farms, a “cleanup and abatement” order requiring that he attempt to minimize erosion of sediment that could bury the gravel beds used by spawning salmon and steelhead trout in the Russian River watershed.

Josh Curtis, assistant executive officer with the water board, says an experienced vineyard manager should know about the various permits required for the type of work Reimers conducted. He also says that, had Reimers applied for permits, his agency is unlikely to have approved some of the destructive land alterations that Reimers made, which have already caused heavy erosion into creeks feeding the Russian River.

According to the notice of violation that the water board issued to Reimers in June, the wine baron, who has served as president of both Jackson Family Wines and Foley Family Wines, violated section 1311 of the federal Clean Water Act. Knowingly doing so is punishable, according to a clause within that law, “by a fine of not less than $5,000 nor more than $50,000 per day of violation, or by imprisonment of not more than 3 years, or by both.”

In their March 21 report, the Sonoma County Department of Agriculture’s investigators wrote that Reimers “is well aware of the permit requirements for vineyard development in Sonoma County.”

But the fine they recommended for Reimers — $131,060 — doesn’t match the crime, says Ross Middlemiss, a staff attorney for the Center for Biological Diversity. He says the fine is “a drop in the bucket” compared to the value of the property, which is 2,278 acres and worth many millions of dollars.

The Center for Biological Diversity sent a letter early this month encouraging the Sonoma district attorney to pursue the most aggressive punitive action possible.

“If civil penalties and fines aren’t enough to deter these bad actors, something more severe needs to be put upon these people who knowingly violate the law,” Middlemiss says. “We’re hoping to avert another example of a winemaker who bulldozes first, then asks for forgiveness, and gets their permit after the fact.”

Alastair Bland is a freelance writer based in Sebastopol, Calif., who covers food, agriculture and the environment.