“On a phone call with [FEMA], he told [them] to cut off the money and no longer give individual assistance to California,” says Taylor, who served as chief of staff to Homeland Security Secretary Kirstjen Nielsen from 2017 to 2019. “He told us to stop giving money to people whose houses had burned down from a wildfire because he was so rageful that people in the State of California didn’t support him and that politically it wasn’t a base for him.” 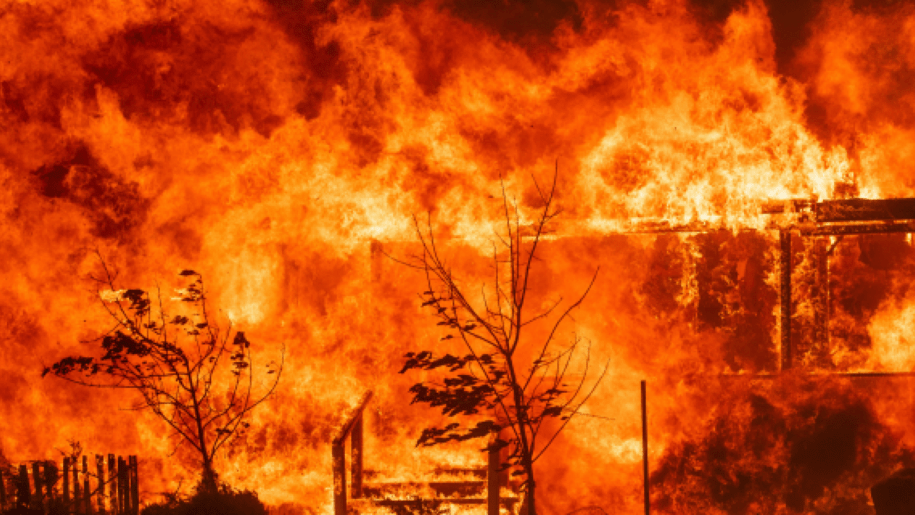 Climate change denier Donald Trump has been credibly accused by his former DHS Chief of Staff (Miles Taylor) of ordering FEMA to withhold funds for California climate change victims during the aftermath of deadly wildfires in 2018.

The personification of cruelty, Trump reiterated the same threat to the state of forty million people once again on Thursday as wildfires raged in the Bay area. He referenced his same ding dong logic he had used in 2018 that California has “many years of leaves and broken trees.” Has anyone reminded him about the ecology, hydrology, carbon sink, and critical food chain of our pine forests?

Here are the current facts on the wildfire outbreak. 771,000 acres burned,119,000 people ordered to flee their homes, 560 fires statewide (23 classified as a major outbreak), fire assistance aid has been requested from other states and Australia. And Trump? He can’t muster any compassion or empathy from his tortured soul for those suffering and dying.

Clearly, Trump is unable to recognize the horrifying consequences of humanity’s failure to rein in greenhouse gas emissions that heat the earth. The problem is much deeper than ignorance. He has a habit of punishing blue America when they suffer natural disasters (exhibit A: Puerto Rico) and he is a despicable and vile climate science denier. And, because of his incompetence, people in evacuation centers are now vulnerable to exposure to the coronavirus.

Miles Taylor stunning comments on Trump’s deplorable order to FEMA on the 2018 California wildfires in the below tweet.

You can add another name to the long list of former Trump administration officials who’ve broken ranks with the capricious Commander in Chief. In a video making the rounds on Twitter, former Department of Homeland Security staffer Miles Taylor endorses Democratic nominee Joe Biden for president and catalogues the “terrifying” things he says he saw during his time at the White House, among them Trump ordering the Federal Emergency Management Administration to stop issuing disaster relief funds to wildfire-stricken California.

“On a phone call with [FEMA], he told [them] to cut off the money and no longer give individual assistance to California,” says Taylor, who served as chief of staff to Homeland Security Secretary Kirstjen Nielsen from 2017 to 2019. “He told us to stop giving money to people whose houses had burned down from a wildfire because he was so rageful that people in the State of California didn’t support him and that politically it wasn’t a base for him.”

Following a terrifying spate of fires in 2018—which included the deadly Camp fire that decimated Paradise, California, and killed 85 people—Trump tweeted a threat to cut off FEMA funds to California if the state didn’t get its “act together” in terms of forest management; he didn’t mention a lack of political support as a motivation.

On Thursday at his campaign stop in Pennsylvania to “rally” his dwindling number of supporters, the occupant once again threatened the residents of California.

He also added, “Maybe we’re just going to have to make them pay for it because they don’t listen to us.”

You can watch President Dumb-Dumb full remarks here if you can stomach it.

Remarkable satellite images (below video) of the sparking of forests by the lightning-caused wildfires.

James Temple writes in the MIT Technology Review on the current California wildfires, an accurate result of climate change.

The fires follow a bone-dry winter in Northern California and a stretch of record-setting summer heat waves across the state, conditions that effectively turned grasslands and forests into tinder. The infernos come on the heels of several of the most destructive and deadly fire seasons in California history.

All of which raises the question, once again: Is human-driven climate change to blame? Did it make the latest fires more likely or more severe?

Climate scientists, who long resisted linking global warming to any specific extreme event, now say its influence is all but certain.

David Romps, director of the Berkeley Atmospheric Sciences Center, said in an email that we’re living in a fundamentally climate-altered world. He noted that average daily highs for this time of year are now about 3˚ or 4˚ F warmer in Berkeley, California, than at the beginning of the 20th century. He was also the lead author of a 2014 Science paper finding that every additional 1 ˚C (1.8 ˚F) of warming could increase lightning strikes over the US by about 12%.

“To cut to the chase: Were the heat wave and the lightning strikes and the dryness of the vegetation affected by global warming? Absolutely yes,” Romps said. “Were they made significantly hotter, more numerous, and drier because of global warming?  Yes, likely yes, and yes.”