Federal Code violations of this act below…. “The organization said both Hutto and South Texas Detention have a notorious history of abuses against detained people, including allegations of sexual assault and forced labor at Hutto, while South Texas Detention has been among the most abusive facilities in terms of the use of indefinite solitary confinement, which is torture. So not only are these facilities continuing to escape accountability, they’re getting awarded for their abuses.” 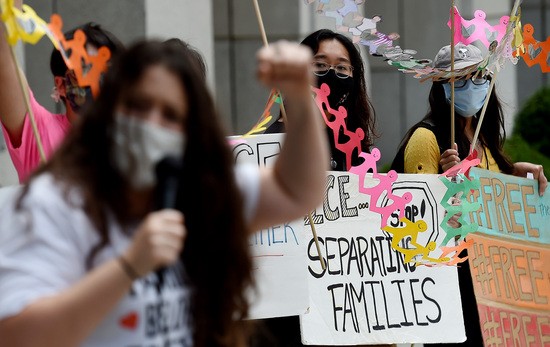 Attribution: AFP via Getty Images
Getty: “Paola Luisi (L), director of Families Belong Together speaks during a protest outside the Immigration and Customs Enforcement (ICE) headquarters to demand the release of immigrants families in detention centers at risk during the coronavirus pandemic, in Washington, DC, on July 17, 2020.”
Aug 14, 2020 12:15pm PDT by Gabe Ortiz, Daily Kos Staff

The out-of-control Immigration and Customs Enforcement (ICE) agency has renewed contracts with private prison profiteers that will extend into the next 10 years, a despicable move that advocates said “appears designed to lock in a decade worth of detention” should presumptive Democratic presidential nominee Joe Biden defeat impeached president Donald Trump in November.

“Making backdoor deals to line the pockets of private prison corporations at the expense of people confined behind bars while COVID-19 is spreading like wildfire shows the complete disregard for human life in ICE custody,” Grassroots Leadership’s Bethany Carson said in a statement, “and how perverse financial incentives are the bedrock of incarceration.” The New York Times reported, “[t]hose agreements would be difficult to unwind if Biden wins.”

Grassroots Leadership said in a statement that “CoreCivic announced on its quarterly investor conference call that it has signed a 10-year contract renewal with ICE at the T. Don Hutto Residential Center in Taylor, Texas and expects a similar award for the Houston Processing Center. It also said ICE is going to make millions of dollars in repairs to the facilities. GEO Group similarly announced that it had signed a new 10-year contract for the South Texas Detention Complex in Pearsall, Texas.”

The organization said both Hutto and South Texas Detention have a notorious history of abuses against detained people, including allegations of sexual assault and forced labor at Hutto, while South Texas Detention has been among the most abusive facilities in terms of the use of indefinite solitary confinement, which is torture. So not only are these facilities continuing to escape accountability, they’re getting awarded for their abuses.

So what could a Biden administration do in light of contracts intentionally designed to go past a theoretical second term?

Well, overhauling ICE so that people including asylum-seekers and their children are no longer jailed in these atrocious facilities in the first place is a start. And while, as The Times noted, it would be difficult to end these contacts, it may not be impossible. How about the federal government uses the full force of its weight to figure that out? Hell, some might say Biden could always just cite the Trump doctrine, which says that we’ll just do what we want. Except this time, it would actually help people for once.

“ICE actively hides information from the public to evade accountability and silence those that speak out against its inhumane practices,” Carson continued in the statement. “At this point, the details of the contracts including the length of their duration and justification remain shrouded in secrecy. Furthermore, the news of an expected contract award for the Houston Processing Center was particularly baffling as a contract valued at nearly $50 million was already awarded to the facility in March.”

US Federal Code of Regulations:

(a) A contract that is funded by annual appropriations may not cross fiscal years, except in accordance with statutory authorization (e.g., 41 U.S.C.6302, 31 U.S.C.1308, 42 U.S.C.2459a, 42 U.S.C.3515, and paragraph (b) of this subsection), or when the contract calls for an end product that cannot feasibly be subdivided for separate performance in each fiscal year (e.g., contracts for expert or consultant services).

(b) The head of an executive agency, except NASA, may enter into a contract, exercise an option, or place an order under a contract for severable services for a period that begins in one fiscal year and ends in the next fiscal year if the period of the contract awarded, option exercised, or order placed does not exceed one year (10 U.S.C.2410a and 41 U.S.C.3902). Funds made available for a fiscal year may be obligated for the total amount of an action entered into under this authority.