Palmer Report: Last week we all learned that Donald Trump’s handpicked Postmaster General Louis DeJoy has a decade-long history of pressuring his employees into making donations to the Republican Party, and then reimbursing them through company bonuses. Not only is this a felony, it’s the kind of felony that the jury almost automatically convicts you for. Now it’s gotten uglier.

It turns out Louis DeJoy hired three of his of his former private sector employees to work at the Post Office, who all fit the pattern of having been pressured into making donations and having been illegally reimbursed. Notably, it turns out some of DeJoy’s campaign finance felonies have taken place quite recently, meaning the statute of limitations isn’t a concern.

This means two things. First, the door is wide open for the North Carolina Attorney General to bring state level criminal charges against DeJoy at any time; the AG all but confirmed twelve days ago that the DeJoy allegations are going to be investigated. In other words, DeJoy is going to prison. 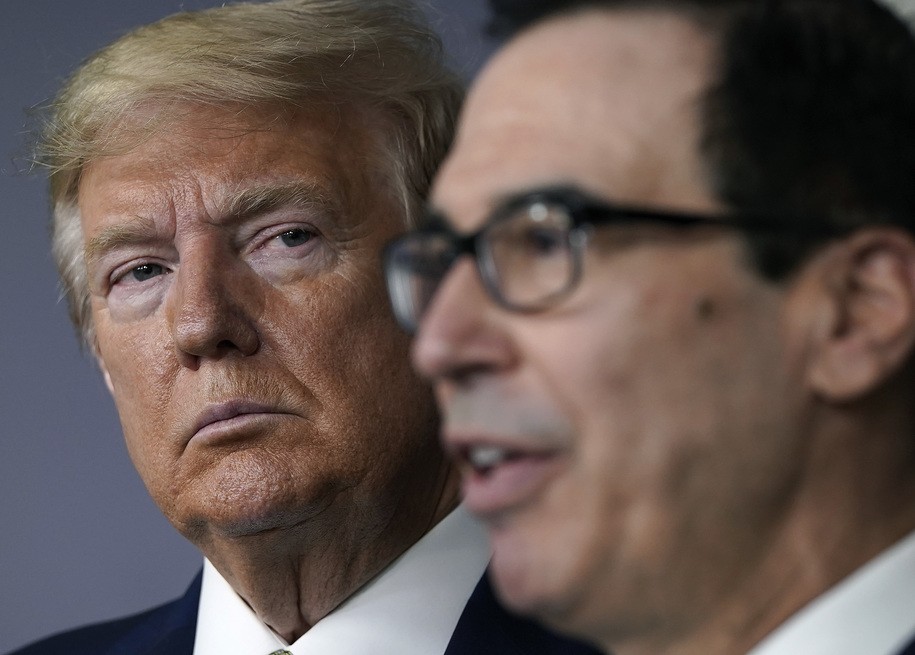 The federal judge who shut down Postmaster General Louis DeJoy’s sabotage of the U.S. Postal Service sort of just scratched the surface when he said the case presented to him showed that DeJoy and Donald Trump are “involved in a politically motivated attack on the efficiency of the Postal Service” and said “this attack on the Postal Service is likely to irreparably harm the states’ ability to administer the 2020 general election.” There are a lot of rocks being turned over right now, and every one of them reveals a teeming mass of corruption, not just with DeJoy but also with USPS Board of Governors Chairman Robert “Mike” Duncan, a major Republican donor, former RNC chairman, and great friend of Senate Majority Leader Mitch McConnell.

DeJoy’s appointment to the job is one of the first very big problems for him, for Trump, and for Treasury Secretary Steven Mnuchin, who has emerged as taking an inappropriate, potentially illegal role in the agency’s sabotage. DeJoy’s political contributions to the Trump campaign and to Republicans, including contributions right after the Postmaster job opened up, at the very least stink and at most open DeJoy up to criminal liability.

New discoveries by the Campaign Legal Center show a pattern of very large donations from DeJoy family members and employees at least through 2018, again looking very much like an illegal straw donor scheme—a very cozy one. Three of the highly paid former employees DeJoy brought with him to the USPS were involved in the donation pattern.

Those donations presumably paid off for DeJoy, considering he got the job. This AP profile of DeJoy shows how frequently he’s used money to get what he wanted, or in one case, what his kid wanted. A “series of large checks” written by DeJoy and his wife (Dr. Aldona Wos, whose nomination to be the next U.S. ambassador to Canada is pending) to the Duke University athletic department was mysteriously followed by their son Andrew getting a walk-on spot on the tennis team full of top national and international prospects. Which Andrew was not. Anyway, yeah, lots of what looks like bribes all through his personal and professional life but that’s not the the mail and this job. Enter Mnuchin.

David C. Williams, a former Postal Service inspector general who resigned as vice chairman of the board of governors in April, when it was clear DeJoy would be hired, said DeJoy “didn’t strike me as a serious candidate“ in his initial interviews. He said that “Governor Barger actually helped him finish a number of sentences before he got stuck” in one interview. How’d he get there? It sure looks like it was through Treasury Secretary Steven Mnuchin. While Mnuchin has denied having any role there, all through the spring he was leaning very, very hard on the board, and according to Williams, using a line of credit that would be extended to the service for coronavirus relief as leverage for taking control over much of the agency’s operations. The USPS is an independent agency, completely outside of the Treasury Department. “The Treasury was using that responsibility to make demands that I believed would turn the Postal Service into a political tool, ending its long history as an apolitical public infrastructure,″ Williams told the Congressional Progressive Caucus last month.

… three separate email chains referencing calls with Treasury Secretary Steven Mnuchin and other agency officials over nine days in early April. Two people familiar with the matter say Treasury drove a hard line, demanding operating control over the agency in exchange for the $10 billion congressionally approved loan. Such a demand was unprecedented, postal experts said, and appeared to lead the USPS to hire another law firm in the spring to study the legality of the issue. That firm, Mayer Brown, concluded that Treasury’s request was illegal.

Mnuchin backed off by mid-April from his effort to just take over the Postal Service outright. DeJoy appeared on the scene in April, during the time Mnuchin was trying to effect a takeover of the agency. He was selected in May and took on the job in June. S. David Fineman, a former chairman of the board of governors, told AP that Mnuchin’s involvement was “unprecedented” and said many questions remain about why drastic changes were put in place so soon after DeJoy became postmaster general. “You put together this piece and you put together that piece and it just doesn’t add up,” Fineman said.

Here’s another element of the whole rotten deal that makes it very good that the federal courts are involved, because it sure as hell seems like Trump staying in office is a big part of the plan. In the documents the Post obtained are documents showing that the “USPS occasionally relied on the legal counsel of well-connected Republicans, including Stefan C. Passantino, who once served as a top White House lawyer under President Trump.” He was brought in by Duncan (the friend of McConnell, Trump booster, former RNC guy). Passantino’s new role in the Trump circle is as “part of a new pro-Trump legal coalition preparing for the possibility of a contested election, a relationship that has raised new ethical flags among the administration’s critics.”

“I see President Trump’s fingerprints all over,” Austin Evers, executive director of American Oversight told the Post. “It’s clear from the president’s public comments, and the actions of his administration, he has a major agenda for the post office—and we see a lot of it in black and white here.” He added, “Why did the Postal Service need the services of Stefan Passantino when his primary claim to fame, the primary reason you hire him, is to carry out Donald Trump’s personal and political defense work?”

There’s a lot more in those documents from the Post to be plumbed. But what is immediately clear is that DeJoy is not there to make the Postal Service great again. He’s there to cripple it, screw up the mail-in vote to help Trump’s reelection, and then sell the scraps to the companies he still has a financial stake in. He’s got to go.