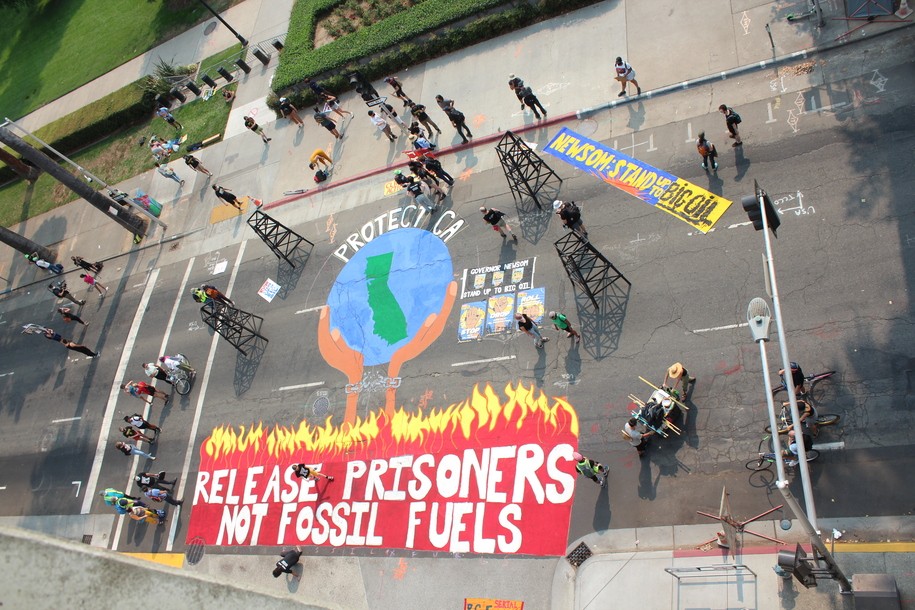 https://newspunch.com/california-pipeline-spills-nearly-30000-gallons-of-crude-oil/
Environmental groups praised the responders, but cautioned that “there is no way to clean up all the destruction.” … Oil company Aera Energy shut off the affected pipeline owned by Crimson Pipeline, but some oil still in the line continues to ooze out. Aera is a natural gas producer, transporting about 13,000 barrels to nearby oil …

Consumer Watchdog issued a press release this morning with more details about and background on the six fracking permits issued by California oil and gas regulators on Friday afternoon:

Los Angeles, CA — The Newsom Administration issued six more fracking permits to Aera Energy late on Friday afternoon at a time of great risk to the environment and to the public health of affected communities also exposed to Covid 19, Consumer Watchdog said today.

The number of fracking permits issued this year—despite a nine-month moratorium imposed by Newsom that ended last April—now comes to 54 issued to Aera and Chevron.

Newsom says he wants to ban fracking, but, contrary to the findings of public interest lawyers, claims the legislature needs to act to end fracking.  He committed to signing legislation to do that next year should it pass the legislature.

However, Consumer Watchdog points to the Governor’s power to demand more bonding from oil companies to plug and clean up their wells as condition of receiving permits.  State law now allows regulators to require that oil producers with multiple wells buy a blanket bond of $30 million, an update to the current law. But the law has yet to be applied by the Oil and Gas Supervisor. Most large companies have no more than a $3 million blanket bond held by the California Geologic Energy Management Division (CalGEM).

“If oil regulators required producers to buy bonds worth many times what they are required to buy now in order to get drilling permits, we wouldn’t see companies applying for new permits at all,” said Consumer Advocate Liza Tucker.  “Issuing fracking permits during the pandemic does nothing to protect the environment and public health, and everything to make oil companies look like a good investment prospect as many of them borrow more money, restructure existing debt, lay off workers, or sell assets.”

Oil companies have never been made to put up enough financial assurance in the form of indemnity bonds to ensure that they will plug up the wells they drill and frack at the end of their productive lives.  The California Council on Science and Technology (CCST) estimates that taxpayers are on the hook for $9.2 billion to eventually plug all of the state’s wells. The Department of Conservation, home to CalGEM,  only has about $107 million on hand. Legislation [AB 1057) enabled the Oil and Gas Supervisor to increase bonding requirements, but the 2019 law has not been applied by the state in the context of issuing permits.

During his first year in office, Newsom issued roughly 220 fracking permits, according to his administration, though he had said he wanted to ban fracking during his election campaign.

A year ago July, Consumer Watchdog and Fracktracker Alliance revealed conflicts of interest among oil regulators, some of whom had invested hundreds of thousands of dollars in companies they regulate.  Newsom fired the then-Oil and Gas Supervisor and halted fracking permits pending independent review by the Lawrence Livermore Lab to see if companies had followed the letter of regulations. Lawrence Livermore began signing off in April 2020—after requiring companies such as Aera to produce documentation of well safety that they had skipped.

In a memo shared with environmentalists late on Friday afternoon, the Administration claimed that fracking is a “relatively uncommon” technique of oil extraction. “It is responsible for approximately 2% of total in-state oil production. The Governor has expressed is commitment to work with the legislature to change state law to prohibit the practice of hydraulic fracturing by 2024.”

In 2015, the CCST estimated that 20% of the state’s oil was produced via fracking. “Environmentalists would like to see the data proving that fracking is responsible for only two percent of the state’s oil production,” said Tucker.

In the first six months of 2020, CalGem granted 185% more permits to drill new oil and gas production wells in California over Newsom’s first six months in office.  All new permits for well work—from drilling new oil and gas production wells, wells using enhanced techniques to bring oil to the surface, support wells and other types of wells were up 8.68%, though fracking permits fell because of the moratorium.  Permits to frack made up less than two percent of all permits issued.