Republicans want to open pristine Alaska wilderness to logging. This is a tragedy | Kim Heacox | Opinion | The Guardian

The Tongass forest sequesters 3m tons of C02 annually, the equivalent of removing 650,000 gas-burning cars off the roads every year

Sitka black-tail deer in the Tongass national forest in south-east Alaska. ‘What does the Trump administration intend to do with it? Open it up for business.’ Photograph: Design Pics Inc/Alamy

Around the world, every minute of every day, trees perform magic. They inhale vast amounts of carbon dioxide, a greenhouse gas, and exhale oxygen, the stuff of life. They keep things in balance. And no single forest does this better – contains more living plant life per area, or stores more carbon – than the 17m-acre Tongass national forest in coastal Alaska. 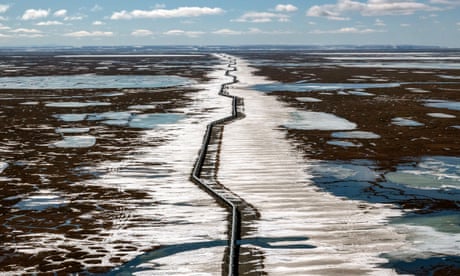 Big oil’s answer to melting Arctic: cooling the ground so it can keep drilling
Read more

Take a deep breath. The oxygen you just pulled into your lungs that entered your bloodstream and nourished your mind was once in a tree.

The Amazon of North America, the Tongass is mostly a roadless, wilderness kingdom of mosses, lichens, salmon, deer, bald eagles and bears – all beneath ice-capped mountains, ribboned with blue glaciers, blanketed with green, shaggy stands of Sitka spruce, western red cedar and western hemlock. Trees up to 10 feet in diameter, 200 feet tall, and 800 years old. But while the Amazon is a tropical rainforest, the Tongass, found at the mid-latitudes, is a temperate rainforest, one of the rarest biomes on Earth (found only in coastal Alaska and British Columbia, the Pacific north-west, the southern coast of Chile, and the South Island of New Zealand).

A true old-growth forest, the Tongass represents a council of ancients. Indigenous Tlingit elders say it is rich with answers – even wisdom – if we ask the right questions and show proper restraint.

And what does the Trump administration intend to do with it?

Open it up for business.

Their plan, more than two years in the making and spearheaded by the Alaska senator Lisa Murkowski, secretary of agriculture, Sonny Perdue, and Alaska governor, Mike Dunleavy – all Republicans bereft of a science education and an ecological conscience – is simple and wrongheaded: put the Tongass back to work as a so-called “healthy” forest, according to Mr Perdue. How? By re-introducing large-scale clearcut logging and extensive road building on 9.3m acres. To do this, they must exempt Alaska from the 2001 US Forest Service “Roadless Rule”, an enlightened conservation initiative that applies to 39 states. In short, the Tongass would no longer be protected.

A final decision is likely to be released later this month.

Never mind that 96% of thousands of recent public comments say the Tongass should remain roadless to protect clean water, salmon streams, wildlife habitat and old-growth trees. Never mind as well that logging the Tongass would create few jobs while adding to an already bloated federal deficit.

Logging in Alaska is heavily subsidized.

Back in the 1970s, 80s and 90s, taxpaying Americans anted up an average of $30m a year. One deficit sale offered every 1,000 board feet of timber for less money than the cost of a cheeseburger. All while many of the trees were shipped “in the round” (as whole logs) to Asia to become rayon, cellophane and other throwaway consumer goods. Another sale generated only 2.5 cents on every dollar the Forest Service spent building roads and preparing paperwork.

And today? To build roads in the Tongass would cost taxpayers up to $500,000 a mile.

Anthropologist and former Alaska writer laureate Richard Nelson, who lived in Sitka, on the edge of the Tongass, once said he wasn’t bothered when he found a stump in the forest. What broke his heart was when he came upon a “forest of stumps”. Entire mountainsides, valleys and islands shorn of trees.

Yes, parts of the Tongass can be responsibly cut, and are. Many local Alaska economies use second-growth stands to harvest good building materials.

And yes, a ravaged forest will return, but not for a long time. The Alaska department of fish and game estimates that large, industrial-scale Tongass clearcuts need more than 200 years to “acquire the uneven-aged tree structure and understory characteristic of old growth”. That is, to be truly healthy and robust again. This according to scientists, not politicians.

The wholesale destruction of our imperiled planet’s most life-sustaining forests has to stop. How? A good first step: vote for politicians who make decisions based on solid science.

Between 2001 and 2017, 800m acres of tree cover (an area nearly 50 times larger than the Tongass) disappeared worldwide, all while global temperatures climbed, wild birds and mammals perished by the billions, and fires, hurricanes, tornadoes and droughts intensified. And since 2017? Witness Australia and California.

What few large, primal forests remain intact today, such the Tongass, become increasingly valuable for their ability to mitigate climate change. Scientists call this “pro-forestation”: the practice of leaving mature forests intact to reach their full ecological potential. The Tongass alone sequesters 3m tons of C02 annually, the equivalent of removing 650,000 gas-burning cars off the roads of the US every year.

The better we understand science and indigenous wisdom, the better we’ll recognize the living Earth as a great teacher that’s fast becoming our ailing dependent. We each get three minutes without oxygen, and we’re not the only ones. It’s a matter of having a deep and abiding regard for all life.

“What makes a place special is the way it buries itself inside the heart,” Nelson wrote in his memoir, The Island Within. “[N]ot whether it’s flat or rugged, rich or austere, wet or arid, gentle or harsh, warm or cold, wild or tame. Every place, like every person, is elevated by the love and respect shown toward it, and by the way in which its bounty is received.”

… because that is when the US withdraws from the Paris climate accord, on 4 November. Five years ago nearly 200 countries committed to a collective global response to tackle the climate crisis. But when Donald Trump took office he announced that the US would leave the Paris agreement. On the one issue that demands a worldwide response to help safeguard the Earth for future generations, the US has chosen to walk away.

The stakes could hardly be higher. The period since the Paris agreement was signed has seen the five hottest years on record, along with a cascade of disasters, from strengthening hurricanes to growing wildfires. If carbon emissions continue we can expect even worse.

With your help we can keep this issue at the center of our 2020 election coverage. The Guardian has promised to give the climate emergency the sustained attention and prominence it demands. And we practice what we preach: we have renounced fossil fuel advertising, becoming the first major global news organisation to do so. We have committed to achieving net zero emissions by 2030. And above all, we will continue our longstanding record of powerful reporting that recognizes the climate crisis as the defining issue of our time.

High-quality journalism that is grounded in science will be critical for raising awareness of these dangers and driving change. Because we believe every one of us deserves equal access to fact-based news and analysis, we’ve decided to keep Guardian journalis