“Corporate abuse by multinational corporations is directly responsible for the loss of $245 billion each year, with companies shifting $1.38 trillion in profits out of the countries where those profits were earned into tax havens, the report said. Private tax evaders also stored a total of $10 trillion in offshore accounts, leading to a loss of $182 billion in public funding.”

“Now more than ever we must reprogram our global tax system to prioritize people’s health and livelihoods over the desires of those bent on not paying tax.”

A first-of-its-kind international report released Friday shows how wealthy countries are the primary drivers of tax revenue loss each year—contributing to $427 billion in losses to public funding annually and affecting the ability of countries all over the world, including developing nations, to provide services to the public.

The Tax Justice Network’s inaugural State of Tax Justice report is the first study to thoroughly measure how much money each country loses each year to corporate tax abuse and private tax evasion, using data that was self-reported by corporations to tax authorities.

The report notes that in light of the global coronavirus pandemic, the loss of revenue to tax abuse and evasion has major implications for public health efforts. One nurse’s annual salary is lost every second to tax havens—the equivalent of 34 million nurses’ salaries each year. 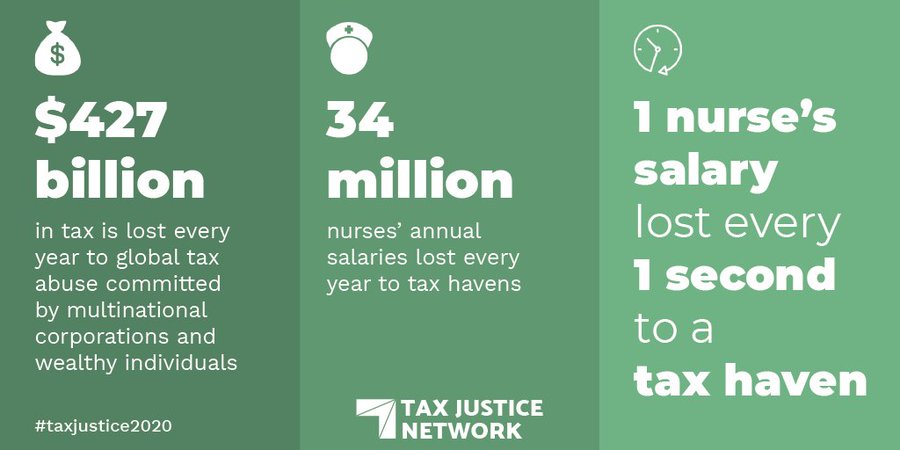 “A global tax system that loses over $427 billion a year is not a broken system, it’s a system programmed to fail,” said Alex Cobham, chief executive of the Tax Justice Network.

“Under pressure from corporate giants and tax haven powers like the Netherlands and the U.K.’s network, our governments have programmed the global tax system to prioritize the desires of the wealthiest corporations and individuals over the needs of everybody else,” he continued. “The pandemic has exposed the grave cost of turning tax policy into a tool for indulging tax abusers instead of for protecting people’s wellbeing.”

Latin America and Africa’s tax losses are equivalent to about 20.4% and 52.5% of their public health budgets, respectively.

Contrary to data compiled in the European Union’s “highly politicized blacklist” of tax havens, the Tax Justice Network said, high income countries are behind a vast majority of global tax abuse.  The British territory Cayman Islands is responsible for other countries losing $70 billion in public funding each year, while the U.K.’s tax laws take away more than $42 billion. The U.S. is in fifth place globally, robbing other countries of $23.6 billion each year. 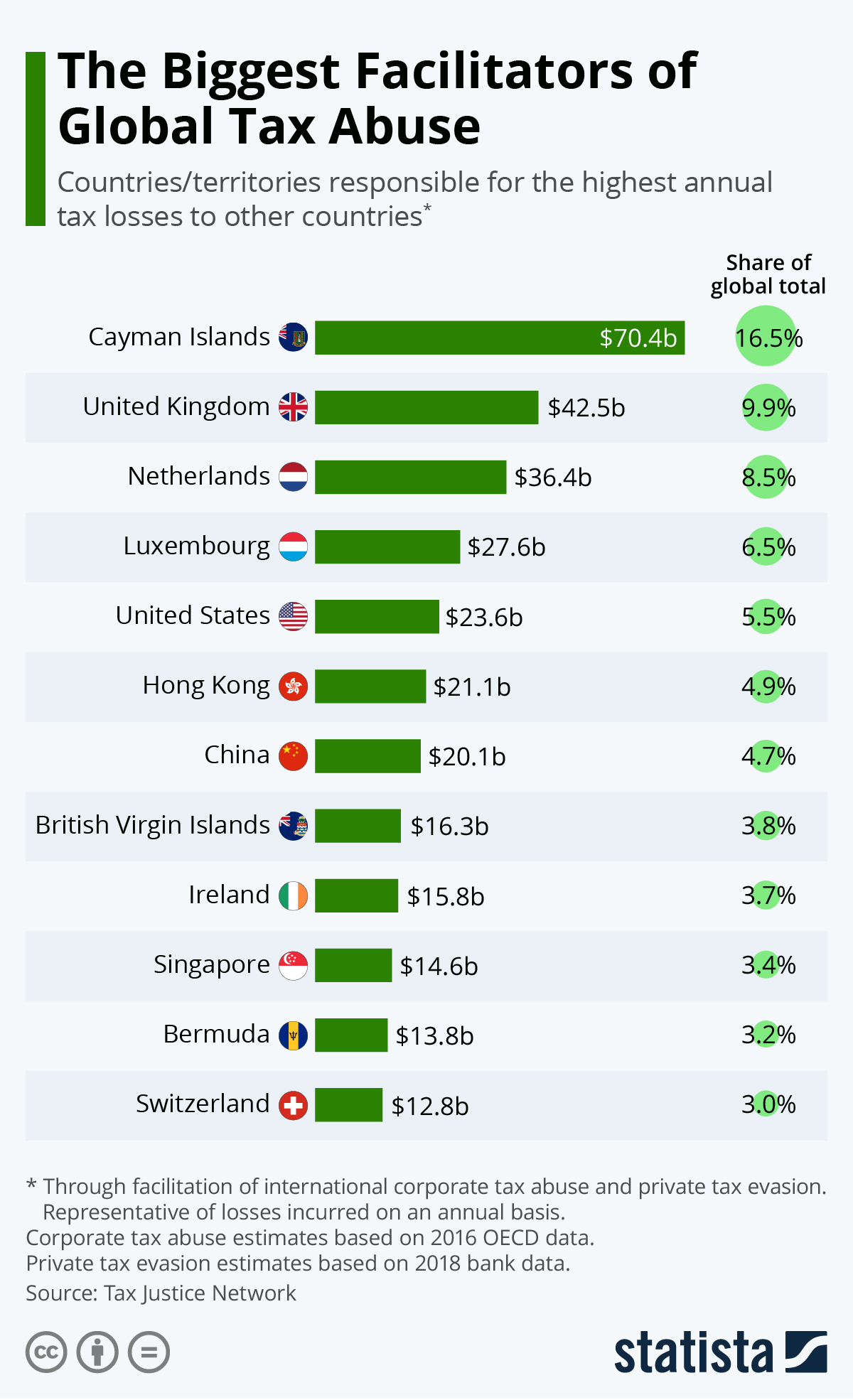 While countries including Palau and Trinidad and Tobago are on the EU’s blacklist and are not cooperative with international tax regulations, the Tax Justice Network reported, they “did not create any observable tax losses for other countries.”

Meanwhile, high-income countries are behind 98% of public funding losses around the world, contributing to a loss of $419 in annual tax revenues.

Corporate abuse by multinational corporations is directly responsible for the loss of $245 billion each year, with companies shifting $1.38 trillion in profits out of the countries where those profits were earned into tax havens, the report said. Private tax evaders also stored a total of $10 trillion in offshore accounts, leading to a loss of $182 billion in public funding.

Joe Boughner, public affairs director for Canada-based labor union ACFO-ACAF, tweeted that corporations which penalize workers for “crippling our economy” by taking time off should focus far more on the $5.7 billion lost each year to tax evasion and corporate abuse.

Rosa Pavanelli, general secretary of the global labor union Public Services International, who took part in Tax Justice Network’s webinar launching the report, pointed to the notion of “building back better” after crises like the pandemic, which has been adopted by the United Nations and U.S. President-elect Joe Biden.

“If you really believe in building back better then pay your taxes!” Pavanelli tweeted. “If governments don’t act now our democracies are really in trouble.”

To ensure countries around the world don’t continue to lose hundreds of billions of dollars each year which could go to strengthening their public health, infrastructure, and education systems, the Tax Justice Network said, governments must promptly take three far-reaching actions:

The report also called on G20 member countries, which are collectively responsible for 26.7% of global tax losses and cost countries $114 billion each year through their tax laws and loopholes for the wealthy, to address the issue at their summit this weekend and require the publication of individual multinational companies’ tax reporting, “so that corporate tax abusers and the jurisdictions that facilitate them can be identified and held to account.”

“Now more than ever we must reprogram our global tax system to prioritize people’s health and livelihoods over the desires of those bent on not paying tax,” Cobham said.