“With President-elect Joe Biden vowing to stop construction of Trump’s monument to racism on day one of his presidency, the outgoing administration is reportedly rushing to build—but in all actuality destroy—as much as possible before noon on January 20.” 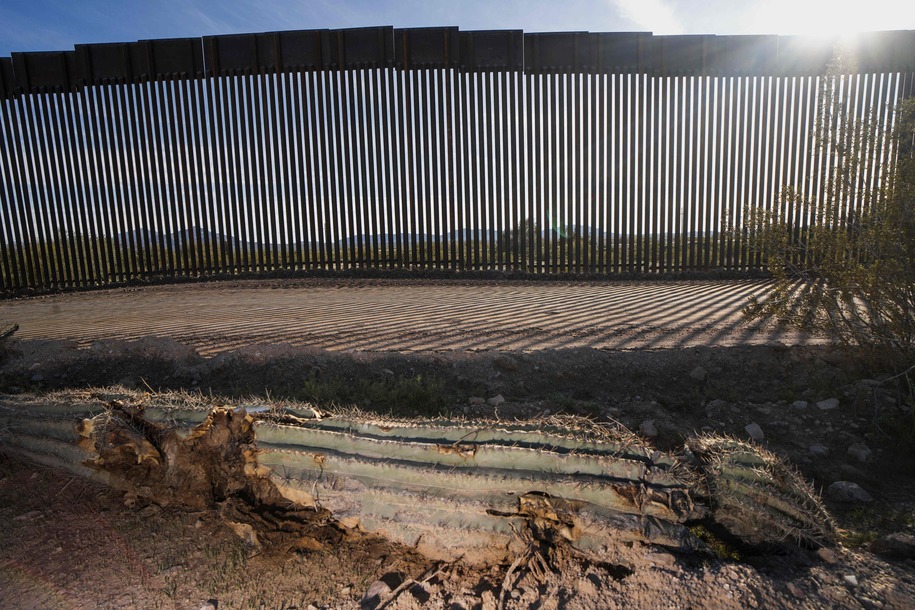 A dead cactus is seen on the ground near the United States-Mexico border wall in Organ Pipe National Park south of Ajo, Arizona, on February 13, 2020.

Laiken Jordahl of the Center for Biological Diversity writes in The New York Times that the damage impeached president Donald Trump’s border wall has inflicted on the surrounding lands is “incalculable.” The borderlands are home to precious wildlife, ecosystems, and monuments that are supposed to be protected by law. But the federal government gave itself the ability to waive away those protections, and the Trump administration has done this to devastating effect.

”Saguaro cactuses, some nearly a century old, in shards on the desert floor,” Jordahl writes. “Jaguars, lost, because a metal wall has blocked their migratory path. Endangered species homeless because their critical habitats have been destroyed. Living and working along the U.S.-Mexico border means watching the surreal, slow-motion leveling of the wild and fragile ecosystems I’ve spent my career fighting to protect.”

Jordahl writes that law passed by Congress in 2005 “included a provision that allows the secretary of homeland security to waive laws that the secretary deems an impediment to building walls and roads along U.S. borders.” The Trump administration has done just that and “cast aside dozens of laws that protect clean air and water, endangered animals and Indigenous burial grounds to rush wall construction.”

“So we’ve watched as this senseless, multibillion dollar vanity project ravages our state’s beautiful wild lands,” Jordahl continued. He writes that in just one example of the damage to wildlife, surveillance cameras captured a confused family of javelina stranded for hours at the fencing, looking for a way through. “Until recently, those animals could have walked under waist-high vehicle barriers,” he said.

With President-elect Joe Biden vowing to stop construction of Trump’s monument to racism on day one of his presidency, the outgoing administration is reportedly rushing to build—but in all actuality destroy—as much as possible before noon on January 20.

NPR reported that in the Guadalupe Canyon and the Coronado National Memorial areas of Arizona, “work crews are dynamiting the sides of pristine mountains and bulldozing access roads in this stunning landscape” for wall the administration likely won’t have time to build. Jordahl, who has used social media to document the administration’s intentional disregard of the region, called it “destruction for destruction’s sake.”

“The damage the border wall has inflicted in just the past year is incalculable,” he continued in The Times. “Much of it will last forever. No amount of money could repay the O’odham and all Indigenous people of the borderlands for the sacred sites, cultural history and natural heritage that’s been destroyed. To right these wrongs, we must start somewhere. Tearing down the wall would be a good start.” Read his full piece here.