“Trump took full credit for the 30,000 Dow Jones, but took zero credit for 260,000 Americans who died from Covid-19, 40 million who face eviction, or 26 million who don’t have enough food to eat on Thanksgiving.” Sen Bernie Sanders

“During the pandemic that has taken everything from millions, U.S. billionaires have now collectively gained over $1 trillion.”

Ahead of Thanksgiving, millions of families are in need of food assistance due to Covid-19 related layoffs and the expiration of federal unemployment benefits. Meanwhile, Amazon CEO Jeff Bezos and 649 other billionaires in the U.S. have amassed a combined $1 trillion in gains since the pandemic began in March 2020. (Photos: Paul Hennessy/SOPA Images/LightRocket and Saul Loeb/AFP via Getty Images)

Illustrating the intensifying inequality that has defined life in the United States for the past four decades—spotlighted throughout the coronavirus crisis—the total amount of wealth gained by the nation’s 650 billionaires since March surged past $1 trillion amid Tuesday’s record-breaking day on Wall Street, which coincided with reports that 26 million Americans are experiencing hunger.

“During the pandemic that has taken everything from millions, U.S. billionaires have now collectively gained over $1 trillion,” the Institute for Policy Studies (IPS), a progressive think tank, said Wednesday.

“The increases in billionaire wealth continue to defy gravity in the real economy where millions have lost their jobs, health, and livelihoods,” said Chuck Collins, a scholar of inequality at IPS who has been tracking the evolution of billionaire wealth throughout the coronavirus crisis, in a statement on Wednesday.

Many of the corporations and their billionaire owners who were featured in the latest IPS analysis made a repeat appearance in another report on pandemic profiteering released last week. As Public Citizen showed, the executives of some retail giants have raked in loads of cash this year while treating their essential frontline employees as expendable, taking away hazard pay even though profits and infections are soaring.

Tuesday marked a disturbing milestone, Collins pointed out, since that was the day that U.S. billionaires surpassed $1 trillion in collective gains since March. As the Dow Jones crossed the record-breaking 30,000 mark, the combined wealth of the nation’s 650 billionaires neared $4 trillion.

The $1 trillion growth in U.S. billionaire net worth since March represents an increase of more than one-third. Collins noted that 29 billionaires have seen their wealth double since the pandemic began, and the combined wealth of this super-rich class is now “twice the amount of wealth held by the bottom 50% of households combined, roughly 160 million people.”

Though he is far from alone, Amazon CEO Jeff Bezos’ wealth increased by nearly $70 billion over the past eight months, growing from $113 billion to more than $182 billion.

Meanwhile, the Bezos-owned Washington Post on Wednesday published a harrowing photo essay documenting the worsening hunger crisis in the U.S., where “26 million now say they don’t have enough to eat, as the pandemic worsens and holidays near.”

“It is difficult to think of a more succinctly obscene illustration of the unfairness of the American economic and political system,” Farhad Manjoo wrote Wednesday in the New York Times.

The Post’s reporting comes only days after CBS News shared a video in which thousands of people are shown waiting—in lines of vehicles that stretch “as far as the eye can see”—to collect food.

Thousands of cars lined up to collect food in Dallas, Texas, over the weekend, stretching as far as the eye can see… 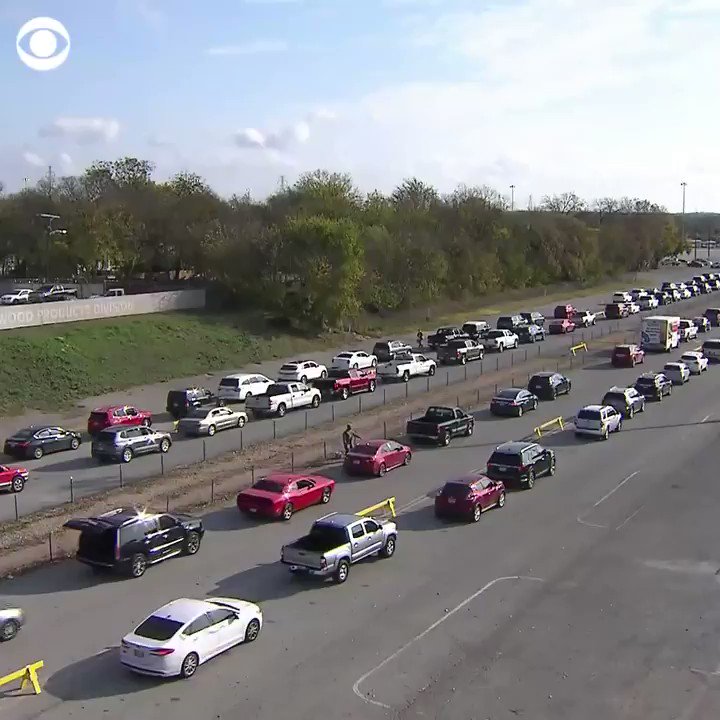 Miles-long food lines are one of the most visible signs of the country’s descent into economic devastation, but a more severe plunge may be on the horizon. The impending expiration of federal unemployment benefits threatens further financial hardship for an estimated 12 million Americans the day after Christmas, and the end of the national eviction moratorium and student loan forbearance is also looming.

As Common Dreams reported Tuesday, the Economic Policy Institute has called for Congress to pass a $3 trillion relief package that provides assistance to working-class households as well as state and local governments, but little progress had been made on a deal before Senate Majority Leader Mitch McConnell (R-Ky.) adjourned the upper chamber for Thanksgiving recess.

Collins warned that “we’re at risk of the oligarchic death spiral,” wherein “wealth concentrates and power concentrates, and the wealthy use their power to rig the rules to get more wealth and power.”

The prioritization of Wall Street indicators and political indifference to the deteriorating economic situation on Main Street, not to mention the explosion of Covid-19 cases, was made clear on Tuesday during a bizzare spectacle in which President Donald Trump held a one-minute briefing to brag about the stock market.

As Sen. Bernie Sanders (I-Vt.) pointed out on social media on Wednesday, “Trump took full credit for the 30,000 Dow Jones, but took zero credit for 260,000 Americans who died from Covid-19, 40 million who face eviction, or 26 million who don’t have enough food to eat on Thanksgiving.”

In his tweet juxtaposing this week’s record-high stock market index with the escalating hunger rate among U.S. households, progressive scholar and former Labor Secretary Robert Reich suggested that “American capitalism is totally off the rails.”

Some on the left, which has long argued that capitalism generates inequality by design, take issue with Reich’s formulation because it implies that working-class immiseration is an aberration rather than a feature of the concentration of wealth and power that characterizes capitalist class rule.

In response to last month’s news that the combined wealth held by the world’s 2,189 billionaires had surpassed $10 trillion, British Labour Party Member of Parliament Richard Burgon argued that the yawning chasm between the super-rich haves and the struggling have-nots is “not a coincidence.”

This growing divergence, Burgon noted, is “how their rotten system works.”

An economy of this sort may not be broken, but it is “fatally flawed,” said labor historian and organizer Jane McAlevey.

“The ultra-wealthy continue to win,” IPS tweeted, while Collins said that “it’s going to be a billionaire Thanksgiving.”