‘Triage officers’ would decide who gets care and who doesn’t if COVID-19 crushes L.A. hospitals

Stretched to the breaking point by a deluge of COVID-19 patients, Los Angeles County’s four public hospitals are preparing to take the extraordinary step of rationing care, with a team of “triage officers” set to decide which patients can benefit from continued treatment and which are beyond saving and should be allowed to die.

The county’s top health officials have not yet declared a shift to a crisis level of care, which would trigger the rationing system, but the leader of the public hospitals acknowledged in a letter reviewed by The Times this week that “there will likely come a point when we simply don’t have sufficient staffing or critical supplies to care for all our patients in the way we normally would.” 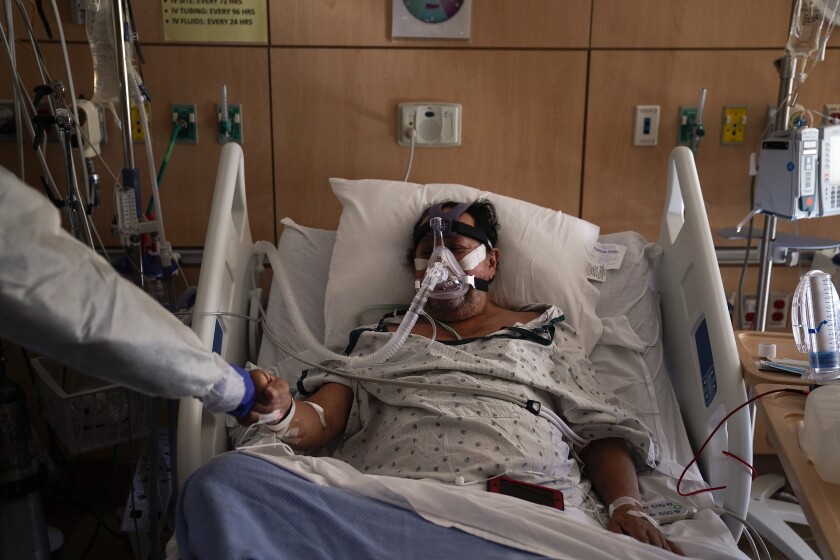 The crisis designation would empower the newly named triage officers — usually critical care and emergency room doctors — to decide which patients at county hospitals would get access to resources such as ventilators, respiratory therapists and critical care nurses when they become too scarce to be provided to every patient.

Hospitals outside the county system will have to decide on their own whether to invoke similar urgency measures, though state officials told them last week that they should have triage plans ready.

At one private hospital in Lynwood this week, doctors stood in a hallway, loudly arguing over whether to give one of the few remaining ventilators to an elderly woman. The doctor describing the scene said the hospital had no formal plan to resolve such disputes.

County health leaders called the most common scoring system too rigid and imprecise to be used as the lone criterion for making triage decisions.

“Our goal as a health system will be to save as many lives as possible,” Dr. Christina Ghaly, who oversees the county’s public hospitals, said in a letter to staff this week. “That means shifting from providing the best care for each individual patient to providing the best care for our whole patient population. It also means possibly reallocating resources from a patient who is not benefiting to a patient who would benefit.”

Physicians, clerics and ethicists have debated for generations how to equitably allocate scarce resources in a time of crisis.

“Now we are on the verge of entering uncharted territory, as we may have to actually make those decisions,” said Dr. Arun Patel, the physician and lawyer overseeing the triage program for L.A. County. “No one in the United States has had to implement guidelines like this, at this scale, or for the duration that we may have to.”

Doctors and ethicists in Los Angeles and across the U.S. have not been able to agree on a single methodology for prioritizing patients, or even concur on the appropriate factors when determining who should get medical care.

Should age be a factor?

Should a patient’s age be a factor? Some ethicists say age should seldom, if ever, be a reason for withholding, say, a ventilator or an intensive-care bed. Other medical experts say that age should be considered, as long as it is not the sole reason for giving or denying care.

L.A. County has cautioned the 29 doctors who have been put on “standby” to act as triage officers to be mindful of potential bias or “preconceived notions of the quality of life for individuals” such as elderly and disabled people, according to a memo sent to county health employees in November.

Yet in the same memo, the county acknowledges that triage decisions might focus not just on saving the most lives but also on “giving the priority to patients likely to survive the longest after treatment.”

One doctor at a major Los Angeles hospital acknowledged that he would probably tilt toward providing care to a 40-year-old over an 80-year-old, even if both had an equal chance of surviving COVID-19, because the younger patient presumably would have the longer life expectancy.

But Patel also painted a scenario in which a younger patient would not be the obvious choice for preferred treatment. He noted that Dr. Anthony Fauci, the head of the U.S. coronavirus response, is 80 but also a physically fit runner, capable of working 18-hour days.

“If he were competing for resources with a 60-year-old, who was in very poor health, with advanced heart disease and diabetes, I’m not going to make that decision based on a single factor like age,” Patel said.

The county triage document acknowledged that it did not provide a concise set of instructions for triage officers that would cover “every possible circumstance that might arise in the context of an overwhelming surge of demand.”

The triage officers are supposed to focus, instead, on each individual’s chance of surviving COVID-19 or other ailments.

Several doctors who helped construct the guidelines said they emphasize an imperative that rightfully should guide medical care even in normal times but sometimes does not — that of providing only “beneficial care.”

That means providing treatment only to patients who stand a reasonable chance of recovery. The doctrine rejects taking extraordinary measures merely to prolong the life of a patient whose death is certain and imminent, often to placate distraught family members.

In a memo this week, one of the county health system’s top doctors reminded his colleagues that they should be sure to apply the beneficial care standard immediately — even before the declaration of an official crisis — so that scarce facilities and personnel are not squandered on those who stand no reasonable chance of getting better.

Dr. Nikhil Barot, a pulmonary care doctor at Olive View-UCLA Medical Center, said he is facing a “fearsome time” preparing to take on his role as one of the county’s triage officers.

Special training in palliative care and medical ethics makes him feel prepared for the work, but he said he has some anxiety about performing the delicate balancing act that’s likely to come.

“We want to give everyone the benefit of the doubt and say, ‘Listen, this is someone who’s getting better or has a chance to get better, let’s keep doing everything that we can to get them back to where they were,’” Barot said.

At the same time, he said he believes that the U.S. historically has often provided patients excessive treatment.

“I absolutely think we provide a lot of care that prolongs the suffering of people and keeps them alive when we know the expected outcome is death,” he said.

One of the tools devised by the medical community to try to clarify inherently murky ethical matters is the Sequential Organ Failure Assessment, or SOFA. The score is based on the condition of six major organ systems: lungs, circulatory, heart, kidney, liver and neurological. Higher scores connote less chance of survival.

SOFA scores have gained favor because they “relieve the individual practitioner of having to sort this out all on their own,” said Dr. Larry Churchill, a professor emeritus of medical ethics at Vanderbilt University in Tennessee. “I think it takes a lot of the anxiety out of the decision, but not all of it, certainly. It relieves one of having to say ‘Gosh, I have to figure this all out on my own and I’m worried about my biases.’ ”

But in L.A. County, officials de-emphasized use of the scores, in part because of a “tabletop” exercise in which an intern applied SOFA to 10 COVID-19 patients and found that nine had the same score. County officials have told the triage doctors in Los Angeles that SOFA scores are “not the focus” of the rationing plan, though they can be used if they provide clarity.

The shift to rationing of care, while likely, is not inevitable, Ghaly and others said. A slight leveling in the number of new coronavirus infections gave some hope that the emergency rules would not be invoked. And county officials hoped that other directives, such as ending elective surgery and urging an end to “futile care,” would free capacity to treat more patients. As bodies pile up at hospital morgues, National Guard and refrigerated trucks arrive to help

If the triage officers are activated, they are intended to allow front-line doctors to continue focusing on the needs of their individual patients, just as they would before the pandemic.

“That’s good for the patient and for the treating physician, to understand that they are both focused on patient’s care and recovery,” Patel said. “The triage officer can worry about the broader picture.”

In L.A. County, it’s recommended that the treating doctor then inform patients and their families about decisions to withdraw a ventilator, a nurse or other care.

Ghaly told county health workers in her letter to prepare themselves for “tough conversations between treating physicians, patients and families about the progression of a critical illness, about the effectiveness of treatment, about letting go.”

Patients or families who want to appeal a decision will first be referred to the triage officer. If they still aren’t satisfied, their concerns will be forwarded to the chief executive of the hospital, or someone the executive designates.

Healthcare workers who have seen many Americans flout rules on social distancing and mask-wearing realize that rationing rules, similarly tilted to promote the greater public good, will not go down easily with some people.

“We are in a culture that kind of leans these days toward individual rights and autonomy,” Barot said. “And these rules say the population’s health matters more than individual health. There’s going to be an obvious backlash to that kind of statement … no matter how much sense it makes.”