The CCC also planted 3 billion trees.….”According to Biden’s website, projects will include working to mitigate wildfire risks, protect watershed health, and improve outdoor recreation access. Sprenkel thinks the effort could also include more activities at the community level, like urban agriculture projects and work retrofitting buildings to be more energy-efficient.” 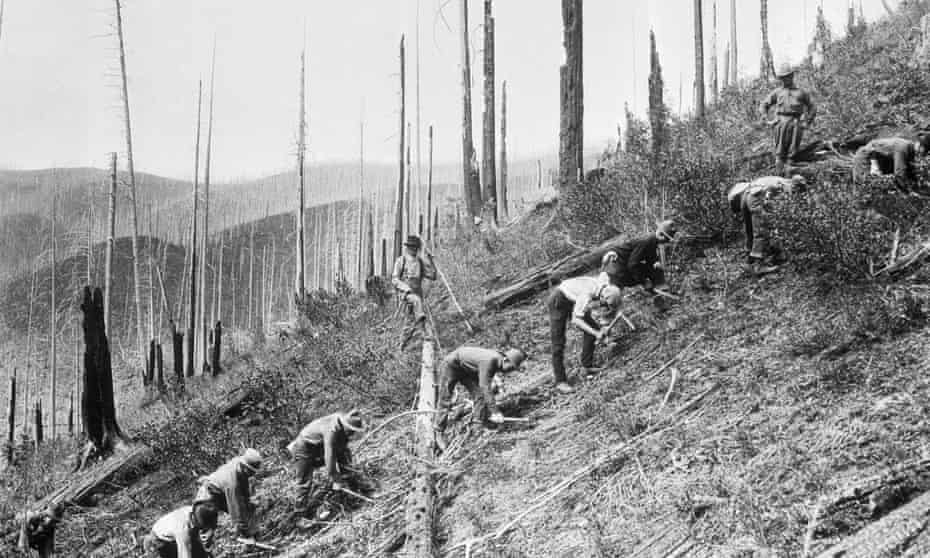 Nearly a century ago, the US faced unemployment at 25% and environmental woes such as flooding along major rivers and extensive deforestation. President Franklin Delano Roosevelt decided to tackle these emergencies simultaneously by creating the Civilian Conservation Corps (CCC) as part of his New Deal.

Through its nine-year existence, Roosevelt’s “Tree Army” put an impressive 3 million jobless Americans to work. All in all, CCC enrollees planted more than 3bn trees, paved 125,000 miles of roadways, erected 3,000 fire lookouts, and spent 6m workdays fighting forest fires. The artifacts from this ambitious effort – such as trails and structures dotting the Grand Canyon national park or the Pacific Crest Trail – are beloved today.

“In creating the Civilian Conservation Corps, we are killing two birds with one stone,” Roosevelt explained in one of his early fireside chats. “We are conserving not only our natural resources but also our human resources.”

Now, as the ongoing pandemic has wrought the greatest economic downturn since the Great Depression, Roosevelt’s public jobs programs are back in the spotlight. As part his recent climate policy spree, Biden announced the establishment of a “Civilian Climate Corps Initiative” that could harness the energy of the very generation that must face – and solve – the climate crisis by putting them to work in well-paying conservation jobs.

After Biden’s omnibus executive order, the heads of the Department of the Interior, the Department of Agriculture and other departments have 90 days to present their plan to “mobilize the next generation of conservation and resilience workers”, a step toward fulfilling Biden’s promise to get the US on track to conserve 30% of lands and oceans by 2030.

“We’re really excited that the Biden administration is taking this on,” said Mary Ellen Sprenkel, head of the National Association of Service and Conservation Corps, a loose association of about 135 corps organizations across the country that already provides young adults and veterans with work on public lands and in rural and urban communities. “Some of our programs have quite a bit of experience in doing this, and hopefully we’ll be called upon to help develop and implement the initiative.”

Far beyond just planting trees, a new conservation corps could pour money into tackling a bevy of other environmental problems, too. According to Biden’s website, projects will include working to mitigate wildfire risks, protect watershed health, and improve outdoor recreation access. Sprenkel thinks the effort could also include more activities at the community level, like urban agriculture projects and work retrofitting buildings to be more energy-efficient. And as Sprenkel pointed out, the federal government owns and manages thousands of buildings that need help to become more energy-efficient. The buildings “could even become sources of renewable energy generation with solar or wind power installations”, she added.

“We could potentially be talking about millions of participants, at least hundreds of thousands to begin,” said the National Wildlife Federation president and CEO, Collin O’Mara. “When we’re thinking about restoring natural systems and helping communities become more resilient, there’s almost infinite amounts of work to be done. Really, the only constraint is going to be the amount of appropriation by the Congress.”

Sprenkel and O’Mara hope a revamped conservation corps could also provide opportunities like apprenticeships and on-the-job education to build career pipelines for long-term employment, especially for communities that have traditionally been left out of the conservation space.

“The transition to a renewable energy economy at the scale needed to keep warming under 2C is going to require an unprecedented investment in workforce training,” Sprenkel says. “A Civilian Climate Corps can be that program that engages workers in hands-on learning, so they are prepared to enter solar, wind, habitat resiliency, disaster response and other essential industries such investment in those industries come to fruition.”

The original Civilian Conservation Corps had its flaws, and its legacy is marred by racism and sexism. Only young men were allowed to enlist, and though camps were originally integrated when they began in 1933, by 1935, they were fully segregated. According to O’Mara, equitable access must be addressed from the outset in this new iteration of the corps in order to recruit, retain and support young people of color in the overwhelmingly white field of conservation.

“There’s always this fear that these types of national service programs become gap years for upper-middle-class, suburban white kids,” he says. To combat that, O’Mara said, “we have to require that the representation of the corps reflects the full diversity of the country” by ensuring “the authorizing legislation and the agencies make that a top, non-negotiable priority”.

O’Mara, himself a former AmeriCorps volunteer, added that “this could be a truly transformative program. If we see massive investments in both rural and urban lands, [it’ll really] make a dent in the challenges that we’re trying to address.”

• This article was amended on 15 February 2021. An earlier version misnamed the Pacific Crest Trail as the “Pacific Coast Trail”.