Trump appointee: A wild-eyed misinterpretation of the commerce clause 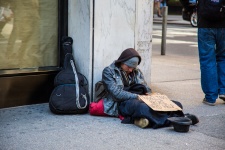 A federal district judge ruled today that the federal government’s moratorium on evictions is unconstitutional. The judge’s theory is that evicting tenants for nonpayment of rent isn’t an “economic” activity. Therefore, it’s beyond Congress’s power under the Commerce Clause. I know that sounds nuts, but that actually it is what the judge said.

The judge’s theory was that Congress can regulate the payment of rent, but not access to property.  Property law is, after all, a traditional subject of state law.  It may not surprise you that the judge in question, J. Campbell Barker, was a Trump appointee and a protege of Texas Attorney General  Ken Paxton.

Barker was apparently a top law student at the University of Texas, but he must have skipped the Constitutional Law class.  The idea that you can disaggregate a commercial transaction and call one small piece of it “noneconomic” has no basis in Supreme Court precedent.

For instance, the Supreme Court ruled more than fifty years ago that Congress could use its commerce power to ban discrimination against Blacks by restaurants.  Under Barker’s theory, however,  access to the restaurant’s land would be a matter of state real estate law.  Congress might be able to regulate the payment for food. It might be even be able to require the restaurant to sell take-out to Blacks.  But it couldn’t require the owner to actually let Blacks into the restaurant.

It’s easy to imagine the same argument being made in environmental cases.  Making steel is an economic activity.  But companies don’t get paid for the smoke they emit, so I guess Judge Barker would consider that a noneconomic activity.   Using a similar theory, catching a fish isn’t itself an economic activity. It’s just reducing unowned property to possession, a matter for state property law. After all, the fish aren’t paying to be caught.  So Congress could regulate the sale of fish, but not fisheries.  And the same for killing members of an endangered species.

It seems clear that evicting renters is a commercial activity, just like repossessing cars.  It’s also an activity that has a clear impact on interstate commerce in the context of a pandemic. CDC had good evidence to support its view that people who are evicted are likely to end up in some kind of group housing situation where they can catch or transmit the virus.  If you don’t think spreading the virus impacts interstate commerce, you must have been in a coma for the past year.

I have my doubts that Judge Barker would actually endorse all these logical consequences of his theory, though I might be wrong about that.  Most likely, he didn’t really think through the implications of his theory.  He was probably too focused on slapping down what he considered a massive federal power grab.  Let’s hope the appellate courts give the issue a bit more thought.