Reminder, GOP once stood for: 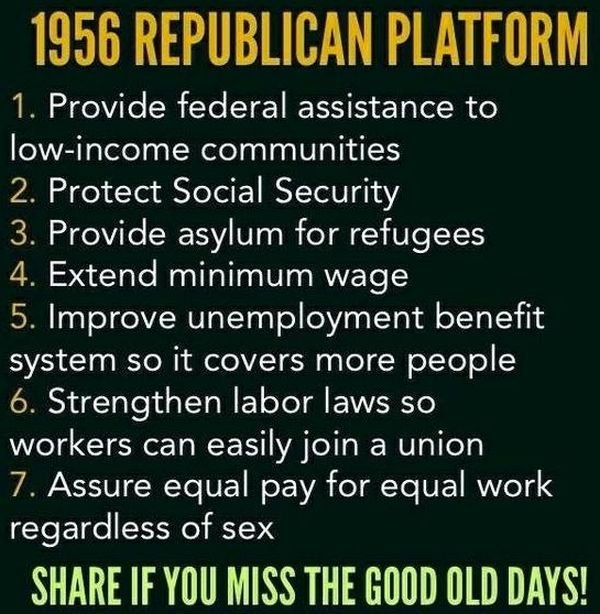 Common Dreams: ‘Show the Video to Someone You Know’: Watch Democrats’ Must-See Exhibit A at Trump Trial

“If the pursuit of justice does not fuel you, let the rage and horror of this piece of testimony do it.”

Rep. Jamie Raskin (D-Md.), the leader of nine House impeachment managers, presented the video—described by author and activist Bill McKibben as “one of the iconic documents of American history”—during his opening statements. It begins with Trump’s speech at a rally before his supporters stormed the Capitol.

Following presentation of the video, Raskin addressed the Senate chamber.

Writer, photographer, and founder of the Female Farmer Project Audra Mulkern tweeted that the video made her “feel suspended in time—the surreal moment of it actually happening and that it was incited by the [president].”

Bill McKibben
@billmckibben
Enormous respect for @jamie_raskin whose video presentation today at the impeachment trial is now one of the iconic documents of American history. These scenes, once witnessed, can’t be erased from heart and mind. https://c-span.org/video/?c4944566/user-clip-house-impeachment-managers-opening-video

“It is horrifying and a must viewing for every American,” Mulkern said of the video, before turning her focus to the Capitol attack, adding: “May those responsible be held accountable and it never happen again.”

Esquire politics editors Jack Holmes similarly wrote after the video’s release that it should be shown far and wide as “a vital piece of the historical record” and a permanent scar on Trump’s record.

“Show the video to someone you know. And if you run a news program, show it to the someones you know are watching,” he wrote. “Even in the unbelievable cases where they remain unconvinced that the president must face consequences for what he’s done, you will know you’ve done your duty as a citizen of this country. If the pursuit of justice does not fuel you, let the rage and horror of this piece of testimony do it.”

While the video garnered widespread attention online, six progressive groups on Tuesday raised concerns about the Democrats’ approach to the trial and called for the inclusion of witness testimony, arguing that “the Senate, and the nation as a whole, need to hear from witnesses who can testify not only about the violent attack on the U.S. Capitol on January 6th, but also about Trump’s actions leading up to that attack.”

Trump is the only president in U.S. history to be impeached twice. Only 10 Republicans joined with House Democrats on January 13 to pass a single article of impeachment charging Trump with engaging in “high crimes and misdemeanors by inciting violence against the government of the United States.”